From Infogalactic: the planetary knowledge core
Jump to: navigation, search
For the physical headgear, see cap. 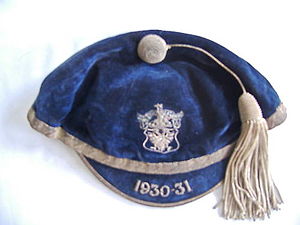 In British sport, a cap is a metaphorical term for a player's appearance in a game at international level. The term dates from the practice in the United Kingdom of awarding a cap to every player in an international match of association football. In the early days of football, the concept of each team wearing a set of matching shirts had not been universally adopted, so each side would distinguish itself from the other by wearing a specific sort of cap.

An early illustration of the first international football match between Scotland and England in 1872 shows the Scottish players wearing cowls, and the English wearing a variety of school caps. The practice was first approved on 10 May 1886 for association football after a proposal made by N. Lane Jackson, founder of the Corinthians:[citation needed]

That all players taking part for England in future international matches be presented with a white silk cap with red rose embroidered on the front. These to be termed International Caps.

The act of awarding a cap is now international and is applied to other sports. Although in some sports physical caps may not now always be given (whether at all or for each appearance) the term "cap" for an international or other appearance has been retained as an indicator of the number of occasions on which a sportsperson has represented a team in a particular sport. Thus, a "cap" is awarded for each game played and so a player who has played x games, for the team, is said to have been capped x times or have won x caps.

As an example, the England men's association football teams still awards physical caps. Players are awarded one cap for every match they play — unless they play in a World Cup or European Championship finals tournament. Then they are given a single cap for the competition — with the names of all their opponents stitched into the fabric of the cap itself. Thus when David Beckham made his one hundredth appearance for England, he only received his 85th physical cap as a number of his appearances had been at World Cup and European Championship final tournaments for which he only received one cap.[1]

The world record holder for the highest number of international caps as of 5 November 2010 is retired American football player Kristine Lilly, who has 352 caps (between 1987 and 2010) in women's association football. In men's association football, the record belongs to former player Ahmed Hassan of Egypt; he surpassed Claudio Suárez with his 178th cap on 27 March 2012. The first footballer to win 100 international caps was Billy Wright of England's Wolverhampton Wanderers. Wright went on to appear 105 times for England, 90 of them he obtained whilst he was a captain.

FIFA rules state that any club that refuses to release a player for national team duty is barred from using the player for two matches, a rule which is intended to discourage clubs from pretending that the player is injured. However, it is a player's choice to refuse to play for or retire from his or her national team.

Some current leading holders of association football caps (men as of 14 September 2014, women as of 1 January 2016) are:

In cricket, there are two types of caps. Firstly, there is the international type, as described above. Some countries also award a domestic type generally known as a "county cap". The latter system is most commonly applied in English county cricket. Most counties do not automatically award caps to players on their first appearance; instead, they have to be "earned" through good performances. Indeed, one can play at the highest domestic level for several years, and have a quite significant career in first-class cricket, without ever winning a cap.

The world record for the number of caps in Test cricket is held by Sachin Tendulkar of India, who has, over the course of a 22-year career, collected 200. Tendulkar also holds the record for One Day Internationals, with 463 caps.

In rugby union, 35 players have reached 100 international caps as of 5 June 2012. Players from England, Scotland, Wales and Ireland are eligible for selection to the British and Irish Lions touring squad. Lions matches are classed as full international tests, and caps are awarded. The Pacific Islanders team, composed of players from Fiji, Samoa, Tonga, Niue and Cook Islands have a similar arrangement, although no players involved have so far reached 100 caps (Fijian Nicky Little is closest with 71 caps).

Players still active at Test level are in bold type.

Players still active at Test level are in bold type.

The most capped Briton is Warrington Wolves forward Adrian Morley who has 52 caps (30 for Great Britain, 22 for England).