Cape Breton fiddling is a regional violin style which falls within the Celtic music idiom. Cape Breton Island's fiddle music was brought to North America by Scottish immigrants during the Highland Clearances. These Scottish immigrants were primarily from Gaelic-speaking regions in the Scottish Highlands and the Outer Hebrides. Although fiddling has changed considerably since this time in Scotland, it is widely held[who?] that the tradition of Scottish fiddle music has been better preserved in Cape Breton. 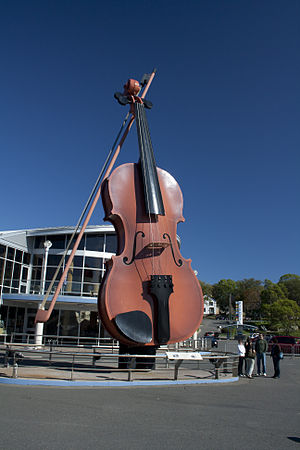 The World's Largest Fiddle (and bow) on the Sydney waterfront in Cape Breton.

In 2005, as a tribute to the area's traditional music, the construction of a tourism center and the world's largest fiddle and bow was completed on the Sydney waterfront.

Cape Breton playing is highly accented, characterized by driven up-bowing. The tunes of other music origins (Irish, Canadian, French-Canadian, etc.) sound quite different when performed by Cape Breton players. The strong downbeat pulse is driven by the fiddler's heel into the floor. The pattern tends to be heel-and-toe on reels, the heel on strathspeys.

Cape Breton fiddle music is strongly influenced by the intonations of the Scots-Gaelic language, especially Puirt a Beul (mouth music) and strathspeys. The ornaments are adapted from those used on the Great Highland bagpipe. The ornamentation (cuts aka. trebles, drones and doubling) brings out the strong feeling of Cape Breton fiddle.

A century ago the violin and pump organ were the common instruments; the latter has been supplanted by piano.

The types of tunes commonly associated with Cape Breton fiddling are jigs, reels, marches, strathspeys, clogs (hornpipes), and slow airs. Many of the tunes associated with Cape Breton fiddle music are also commonly performed on other instruments, especially bagpipes, piano and guitar. It is not unheard of for the music to be performed on harmonica, tin whistle, mandolin or banjo.

Modern Cape Breton players draw on a large body of music, from the Scottish and Irish traditions, and from modern compositions. Several older books of tune collections have been particularly popular sources:

A number of recent publications also document a substantial amount of the modern Cape Breton repertoire: