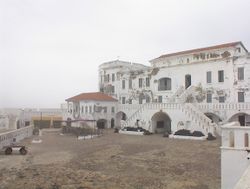 Cape Coast Castle, as rebuilt by the British in the 18th century 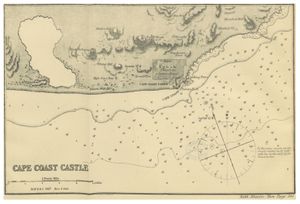 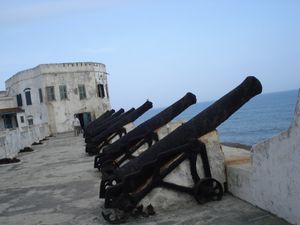 Cannon at the Cape Coast Castle

Cape Coast Castle is one of about forty "slave castles", or large commercial forts, built on the Gold Coast of West Africa (now Ghana) by European traders. It was originally built by the Swedes for trade in timber and gold, but later used in the trans-Atlantic slave trade. Other Ghanaian slave castles include Elmina Castle and Fort Christiansborg. They were used to hold slaves before they were loaded onto ships and sold in the Americas, especially the Caribbean. This “gate of no return” was the last stop before crossing the Atlantic Ocean. 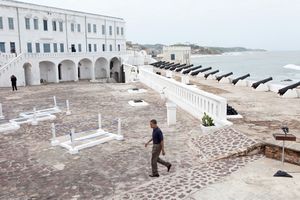 The large quantity of gold dust found in Ghana was what primarily attracted Europe, and many natives of Cape Coast used this to their advantage. In exchange for gold, mahogany, their own people and other local items, the natives received clothing, blankets, spices, sugar, silk and many other items. The castle at Cape Coast was a market where these transactions took place.

At the time slaves were a valuable commodity in the Americas, and slaves became the principal item traded in Cape Coast. Due to this, many changes were made to Cape Coast Castle. One of the alterations was the addition of large underground dungeons that could hold as many as a thousand slaves awaiting export. Many European nations flocked to Cape Coast in order to get a foothold in the slave trade. Business was very competitive and this led to conflict. This is the reason why the castle at Cape Coast changed hands many times during the course of its commercial history.

The first lodge established on the present site of Cape Coast Castle was built by Hendrik Caerloff for the Swedish Africa Company. Caerloff was a former employee of the Dutch West India Company who had risen to the rank of fiscal before employing himself with the latter company established by Louis de Geer. As a former high-ranking officer of the Dutch, Caerloff had the friendly relations with the local chiefs necessary to establish a trading post. In 1650, Caerloff succeeded in getting the permission of the King of Fetu to establish a fort at Cabo Corso (meaning short cape in Portuguese, later corrupted to English Cape Coast).[1] The first timber lodge was erected at the site in 1653 and named Carolusborg after King Charles X of Sweden.

Caerloff returned to Europe in 1655, leaving a Swede by the name of Johann Philipp von Krusenstjerna in charge of Carolusborg. Louis de Geer had however died in the meantime, and Caerloff got himself involved in a serious dispute with his heirs. In Amsterdam, he convinced merchants to give a financial injection to the Danish West India Company, for which he set sail to the Gold Coast in 1657, with the goal in mind to capture for Denmark the Swedish lodges and forts he had established himself.[2] With the help of the Dutch, Caerloff succeeded in driving the Swedes out, leaving the Gold Coast on the captured ship Stockholm Slott, and with Von Krusenstjerna on board as a prisoner.[2]

Caerloff had left Samuel Smit, also a former employee of the Dutch West India Company, in charge of Carolusborg.[3] The Dutch were able to convince Smit in 1659 of the rumour that Denmark had been conquered by Sweden, upon which Smit rejoined the Dutch West India Company, handing over all Danish possessions to the Dutch. The King of Fetu was displeased with this, however, and prevented the Dutch from taking possession of the fort. A year later, the King decided to sell it to the Swedes. After the King died in 1663, the Dutch were finally able to occupy the fort.[3]

The Danes had in the meantime established another fort, Fort Frederiksborg (1661), just a few hundred yards east from Carolusborg. Although situated perfectly to launch an attack on Carolusborg, the British capture of Carolusborg (1664) during the prelude to the Second Anglo-Dutch War, prevented the Danes from challenging them; the British had reinforced the fort, which they named Cape Coast Castle, to such an extent that even Dutch Admiral Michiel de Ruyter deemed it impossible to conquer.[4] As the Dutch had captured the former British headquarters at Kormantin and had rebuilt it as Fort Amsterdam, Cape Coast became the new capital of the British possessions on the Gold Coast.[5]

In 1722, the fort was the site were 54 men of the crew of the pirate Bartholomew Roberts were condemned to death, of whom 52 were hanged and two reprieved.

In 1757, during the Seven Years' War, a French naval squadron badly damaged and nearly captured Cape Coast Castle.[6] This event was likely one of the most important reasons to entirely reconstruct the Castle, which was quite notorious for its collapsing walls and leaking roofs.[7] In 1762, an extensive spur ending in a tower was built on the western side and in 1773, a high building along the north curtain was erected, during which the last remnants of the 17th-century fort were demolished. Greenhill Point, a bastion to the east of the castle, was replaced by two new bastions, with a sea gate in the middle. To the south, two new bastions, named Grossle's Bastions, replaced an old round tower as the main defensive work. The tower, which now had no military use, was extended in 1790s with two stories, now becoming the governors' apartments. The space below Grossle's Bastions was used as the new slave dungeons.[8]

George Maclean was governor of Cape Coast Castle from 1830 until 1844. In October 1836 he met Letitia Landon, a well known British Poet, at a dinner party while on a visit to the UK. They were married and traveled back to Cape Coast Castle where, within two months, Letitia Landon died. Both George and Letitia are buried in the castle courtyard. Maclean was responsible for upholding abolitionist ideals and he cleared 200 miles of the West African coast of British slave trading. He also made peace with the Ashanti (Treaty of 1831), instituted a judicial system still in use in many African democracies and encouraged successful and fair trading. [9]

The castle, or castle and dungeon, to give it its official name, was first restored in the 1920s by the British Public Works Department.

In 1957, when Ghana became independent, the castle came under the care of the Ghana Museums and Monuments Board (GMMB). In the early 1990s the building was restored by the Ghanaian Government, with funds from the United Nations Development Programme (UNDP), United States Agency for International Development (USAID), with technical assistance from the Smithsonian Institution and other NGOs.

The Cape Coast Castle, and other forts and castles in Ghana, are included on the United Nations Educational, Scientific and Cultural Organization (UNESCO) World Heritage List. 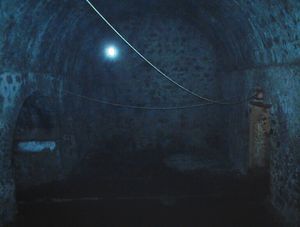 Inside the dungeon of Cape Coast Castle, where hundreds of slaves were held in cramped conditions before being transferred to boats bound for the western hemisphere

Lua error in Module:Coordinates at line 668: callParserFunction: function "#coordinates" was not found.nl:Cape Coast