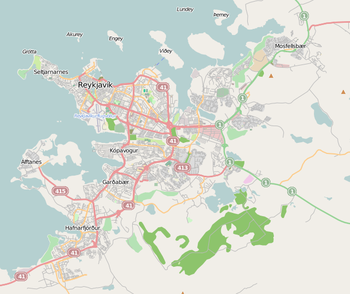 The greater Reykjavík area on OpenStreetMap.

Greater Reykjavík (Icelandic: Höfuðborgarsvæðið, meaning "The Capital Region") is a name used collectively for Reykjavík and six municipalities around it.[1][2] The area is by far the largest urban area in Iceland.[3] Each municipality has its own elected council. Greater Reykjavík's population of 200,852 is over 60% of the population of Iceland, in an area that is only just over 1% of the total size of the country.[4] Municipal governments cooperate extensively in various fields: for example waste policy, shared public transport and a joint fire brigade.

Of the seven municipalities that make up the Greater Reykjavík area, Reykjavík is by far the most populated with 117,764 inhabitants; Kjósarhreppur is the least populated with only 210 residents, but has the largest area: 287.7 km2 (111.1 sq mi). Seltjarnarnes is the smallest municipality with an area of 2.3 km2 (0.89 sq mi).