Capo d'Orlando is a comune in the province of Messina, Sicily, Italy and is regarded as one of the main centers of the mountain and coastal district of Nebrodi comprensorio dei Nebrodi. Well known as a thriving tourist and commercial center,[citation needed] Capo d'Orlando is also the birthplace of the poet Lucio Piccolo, cousin of Giuseppe Tomasi di Lampedusa (see "Il Gattopardo"). Artistic activities take place in Capo d'Orlando (municipal's picture-gallery, the museum "Villa Piccolo"), entertainment(cinema, theater, blues club).

It is home to a top division basketball team, Orlandina Basket.

Capo d'Orlando is renowned, among other things for its beautiful coastline, which offers a wonderful view of the Aeolian islands right in front, a remarkable coastal landscape and stunning sunsets to be admired. Tourism is one of the main resources that greatly contributes to the local economy. Capo d'Orlando's based on its centrality role in the area which makes for a point of reference for the entire surrounding area. For the massive[citation needed] presence of banks and businesses along with several fair sized factories[citation needed] located nearby such as "Porte IMIC" (wooden and metal door manufacturer), "irritec" and "siplast" (irrigation systems). Another successful business is related to the exploitation of the extensive presence of orange of lemon fields throughout the area.[citation needed] 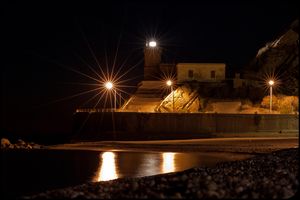 The lighthouse of Capo d'Orlando by night

The town started off as just a tiny fisherman's village of bare self-subsistence-based living. In fact, there wasn't a real settlement for centuries after the destruction, kidnapping and deportation of the former population of Agathyrnum at the hands of the Roman republican army. It was reborn around 1925 after centuries of relative irrilevance when it was elevated to the status of Comune (council), whereas, before it was just a part of the territory of Naso (a hillside town located just above - i.e. to the south of - Capo d'Orlando), and the railway station was made, during the fascist "ventennio" (short history). During the 20th century, its population, influence and tourist development quickly grew taking Capo d'Orlando to a new level of "excellence" in the Sicilian frame which it is actually broadly recognized today.

The town also has a small marina for both fishing and tourist boats alike that also offers transportation to and from the Aeolian islands during the summer season and approximately 14 km of beaches, rocky shores that face the deep blue Tyrrenian sea making it an ideal spot to enjoy the summertime, early fall and late springtime. The location of Capo d'Orlando is also very peculiar because for a town that faces the sea, it is also very close (less than 20 km) to Nebrodi Mountain Regional Environmental Park: a fairly large extension of temperate woods, where is possible to hike to lakes, rivers, falls and tiny historical villages where everyone can enjoy the best of traditional Sicilian food and wine.

Capo d'Orlando has a twin city relationship with the City of Fremantle in Western Australia, established due to the cultural and historical links between the cities, and to maintain family associations, trade and tourism.[1]