Cappadocian, also known as Cappadocian Greek or Asia Minor Greek, is a mixed language formerly spoken in Cappadocia (Central Turkey). In the population exchange between Greece and Turkey in the 1920s, Cappadocian Greeks were forced to emigrate to Greece, where they were resettled in various locations, especially in Central and Northern Greece. The Cappadocians rapidly shifted to Standard Modern Greek and their language was thought to be extinct since the 1960s. In June 2005, Mark Janse (Ghent University) and Dimitris Papazachariou (University of Patras) discovered Cappadocians in Central and Northern Greece who could still speak their ancestral language fluently. Amongst them are middle-aged, third-generation speakers who take a very positive attitude towards the language as opposed to their parents and grandparents. The latter are much less inclined to speak Cappadocian and more often than not switch to Standard Modern Greek. A survey of Cappadocian speakers and language use is currently in preparation. 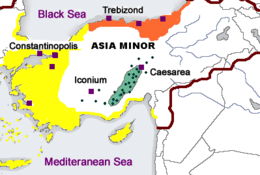 Cappadocian evolved out of Byzantine Greek. After the battle of Manzikert in 1071, Cappadocia was cut off from the rest of the Greek-speaking world and Turkish became the lingua franca in the region.

The earliest records of the language are in the macaronic Persian poems of Jalal ad-Din Muhammad Rumi, who lived in Iconium (Konya), and some Ghazals by his son Sultan Walad.[4][5] Interpretation of the texts is difficult, as they are written in Arabic script, in Rumi's case without vowel points; Dedes' is the most recent edition and rather more successful than others.[6][7][8]

Many Cappadocians shifted to Turkish altogether (written with the Greek alphabet, Karamanlidika); where Greek was maintained (Sille, villages near Kayseri, Pharasa town and other nearby villages), it became heavily influenced by the surrounding Turkish. Unfortunately, there are next to no written documents in Medieval or early Modern Cappadocian, as the language was and still is essentially without a written tradition. The earliest descriptions of Cappadocian date from the 19th century, but are generally not very accurate.

The first reliable grammar of Cappadocian is Modern Greek in Asia Minor: A study of dialect of Silly, Cappadocia and Pharasa (Cambridge: Cambridge University Press, 1916), by Richard MacGillivray Dawkins (1871–1955), the first Bywater and Sotheby Professor of Byzantine and Modern Greek Language and Literature at the University of Oxford, based on fieldwork conducted by the author in Cappadocia in 1909–1911.[9]

In recent years, the study of Cappadocian has seen a revival following the pioneering work on Language Contact, Creolization, and Genetic Linguistics (Berkeley: University of California Press, 1988) by Sarah Grey Thomason and Terrence Kaufman, and a series of publications on various aspects of Cappadocian linguistics by Mark Janse, professor at Roosevelt Academy, who has also contributed a grammatical survey of Cappadocian to a forthcoming handbook on Modern Greek dialects edited by Christos Tzitzilis (Aristotle University of Thessaloniki).

The recent discovery of Cappadocian speakers by Janse and Papazachariou will result in a new grammar, dictionary and collection of texts.

Cappadocian Greek is well known from the linguistic literature as being one of the first well documented cases of language death, and in particular the significant admixture of non-Indo-European linguistic features into an Indo-European language. This process was pronounced on South-Western Cappadocia, and included the introduction of vowel harmony and verb-final word order.

The Greek element in Cappadocian is to a large extent Byzantine, e.g. θír or tír "door" from (Ancient and) Byzantine Greek θύρα (Modern Greek θύρα), píka or épka "I did" from Byzantine Greek έποικα (Modern Greek έκανα). Other, pre-Byzantine, archaisms are the use of the possessive pronouns mó(n), só(n) etc. from Ancient Greek εμός, σός etc. and the formation of the imperfect by means of the suffix -išk- from the Ancient Greek (Ionic) iterative suffix -(e)sk-. Turkish influence appears at every level. The Cappadocian sound system includes the Turkish vowels ı, ö, ü, and the Turkish consonants b, d, g, š, ž, tš, dž (although some of these are also found in Greek words as a result of palatalization).

Agglutinative forms are also found in the verb system such as the pluperfect írta ton "I had come" (lit. "I came I was") (Delmeso) on the model of Turkish geldi idi (geldiydi). Although Cappadocian word order is essentially governed by discourse considerations such as topic and focus, there is a tendency towards the Turkish subject–object–verb word order with its typological correlates (suffixation and pre-nominal grammatical modifiers).