Wild goats are animals of mountain habitats. They are very agile and hardy, able to climb on bare rock and survive on sparse vegetation. They can be distinguished from the genus Ovis, which includes sheep, by the presence of scent glands close to the feet, in the groin, and in front of the eyes, and the absence of other facial glands, and by the presence of a beard in the males, and of hairless calluses on the knees of the forelegs.[1]

The Rocky Mountain goat is in a separate genus, Oreamnos. 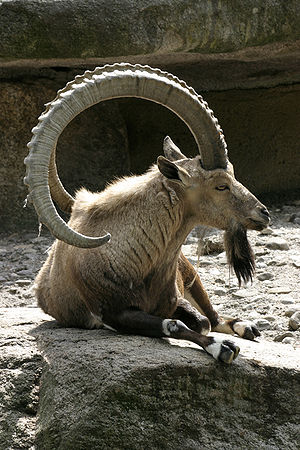 All members of the Capra genus are bovids (members of the family Bovidae), and more specifically and caprids (subfamily Caprinae). As such they are ruminants, meaning they chew the cud, and have four-chambered stomachs which play a vital role in digesting, regurgitating, and redigesting their food.

The genus has sometimes been taken to include Ovis (sheep) and Ammotragus (Barbary sheep),[2] but these are usually regarded as distinct genera, leaving Capra for goats and ibexes. In this smaller genus, some authors have recognized only two species, the markhor on one side and all other forms included in one species on the other side.[3] Today, nine species are usually accepted:[4]

The goats of the genus Capra have complex systematic relationships, which are still not completely resolved. Recent studies based on mitochondrial DNA suggest that the Siberian ibex and the Nubian ibex represent distinct species, which are not very closely related to the physically similar Alpine ibex. The Alpine ibex forms a group with the Spanish ibex. The West Caucasian tur appears to be more closely related to the wild goat than to the East Caucasian tur. The markhor is relatively little separated from other forms—previously it had been considered to be a separate branch of the genus.[5]

Almost all wild goat species are allopatric (geographically separated)—the only geographical overlaps are the wild goat (Capra hircus) with the East Caucasian tur (Capra caucasica cylindricornis), and the markhor (Capra falconeri) with the Siberian ibex (Capra siberica). In both cases, the overlapping species do not usually interbreed in the wild, but in captivity, all Capra species can interbreed, producing fertile offspring.[6]

Species and subspecies of goats

Along with sheep, goats were among the first domesticated animals. The domestication process started at least 10,000 years ago in what is now northern Iran.[7] Easy human access to goat hair, meat, and milk were the primary motivations. Goat skins were popularly used until the Middle Ages for water and wine bottles when traveling and camping, and in certain regions as parchment for writing. 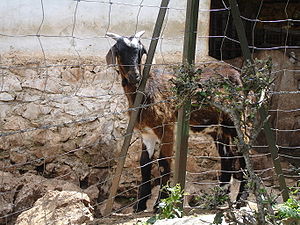 Evidence of the ibex is widely present in the archaeological record, particularly in the Near East and Mediterranean regions. Ibex motifs are very common on cylinder seals and pottery, both painted and embossed. Excavations from Minoan Crete at Knossos, for example, have yielded specimens from about 1800 BC, including one cylinder seal depicting an ibex defending itself from a hunting dog.[8] From the similar age a gold jewelry ibex image was found at the Akrotiri archaeological site[9] on Santorini in present-day Greece.

An Iron Age Capra ibex specimen was recovered at the Aq Kupruk archaeological site in present-day Afghanistan, illustrating either domestication or hunting of the ibex by these early peoples.[clarification needed] However, archaeological records of ibex can be difficult to separate from those of domestic goats.[10] 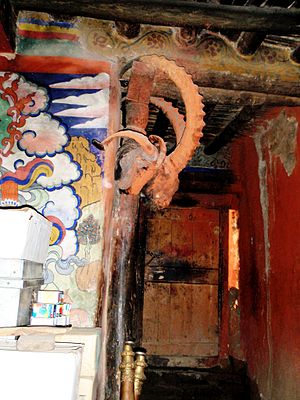 It has been suggested that rock carvings and the horns of ibex may have been used as charms to encourage childbearing or to give thanks for a child by Himalayan peoples between 1000 BC to 300 AD[citation needed]. As commented on by historian and archaeologist, A. H. Francke:

Our Christian evangelist at Khalatse had become a father a few weeks before, and the people of the village had made presents of "flour-ibex" to him and his wife. He gave me one of those figures, which are made of flour and butter, and told me that it was a custom in Tibet and Ladakh, to make presents of "flour-ibex" on the occasion of the birth of a child. This is quite interesting information. I had often wondered why there were so many rock carvings of ibex at places connected with the pre-Buddhist religion of Ladakh. Now it appears probable that they are thank offerings after the birth of children. As I have tried to show in my previous article, people used to go to the pre-Buddhist places of worship, in particular, to pray to be blessed with children.[11]