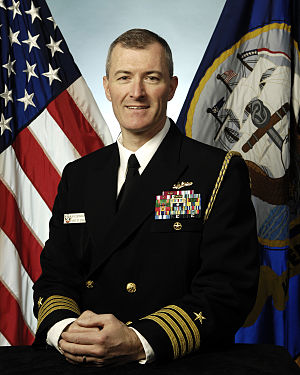 Portrait of a U.S. Navy submarine captain, serving as a chief of staff to a flag officer.

Reflecting its nautical heritage, the term "captain" also sometimes is used as a military title by more junior officers who are serving as the commanding officer (CO) of a commissioned vessel of the Navy, Coast Guard, or National Oceanic and Atmospheric Administration ship of patrol boat size or greater, while officers below O-6 commanding aviation squadrons (typically O-5 commanders) will usually use the less formal title of "skipper." (see rank vs. title)

In the United States Navy, captain (abbreviated CAPT) is a senior officer rank, with the pay grade of O-6. It ranks above commander and below rear admiral (lower half). It is equivalent to the rank of colonel in the other uniformed services. Promotion to captain is governed by Department of Defense policies derived from the Defense Officer Personnel Management Act (DOPMA) of 1980 or its companion Reserve Officer Personnel Management Act (ROPMA). DOPMA/ROPMA guidelines suggest that no more than 50% of eligible commanders should be promoted to captain after serving a minimum of three years at their present rank and after attaining 21–23 years of cumulative commissioned service, although this percentage may be appreciably less contingent on force structure and the needs of the service. With very few exceptions, such as Naval Aviator Astronaut and Naval Flight Officer Astronaut, unrestricted line officer captains in the Navy will have successfully completed at least one commanding officer assignment at the commander (O-5) level, typically a destroyer or frigate for surface warfare officers, an attack submarine for submarine warfare officers, or an aviation squadron for Naval Aviators and Naval Flight Officers, before being selected for promotion to captain.

In the submarine community, a captain typically commanded a ballistic-missile submarine (SSBN) until the early 21st century when the requisite rank for the position was downgraded to that of a commander. Today, like their surface warfare counterparts, captains in the submarine community may serve as commodores of submarine squadrons (SUBRON), commanding a group of SSBNs or attack submarines (SSN).

In Naval Aviation, captains with sea commands are Naval Aviators or Naval Flight Officers who are commanding officers or executive officers of aircraft carriers or commanders of air-capable amphibious assault ships, commanders of carrier air wings (CAG), or commodores of functional or "type" air wings or air groups. A smaller cohort outside of sea and shore commands may also serve as astronauts on loan to the National Aeronautics and Space Administration (NASA).

In contrast, commanders of aircraft carrier strike groups (CSG) and expeditionary strike groups (ESG) are normally rear admirals, while subordinate destroyer squadron commodores, amphibious squadron commodores, carrier air wing commanders and the individual ship commanding officers within the strike group are of captain rank or lower. In rare instances, the carrier air wing commander may be a Marine Corps colonel who is a Naval Aviator or Naval Flight Officer; while in the expeditionary strike group, the Marine Expeditionary Unit (MEU) commanding officer will always be a Marine Corps colonel. Adding to the confusion, all commanding officers of Navy ships and submarines are called "captain" regardless of actual rank.

The United States Coast Guard also uses the naval rank system. A Coast Guard captain ranks above a commander and below rear admiral (lower half). The sleeve and shoulder board insignia are similar to the Navy insignia, with a lighter shade of blue with a gold USCG shield above the stripes. Coast Guard captains follow career paths very similar to their Navy counterparts, with marine safety, security, and boat forces officers serving as Captain of the Port in command of Coast Guard Sectors, seagoing officers typically commanding large maritime security cutters or high endurance cutters and aviators commanding coast guard air stations. Coast Guard captains will also command all types of major Coast Guard shore installations and activities, as well as serve as chiefs of staff / executive assistants, senior operations officers, and other senior staff officers for Coast Guard flag officers. The Coast Guard has no staff corps officers.

Although it exists largely as a maritime training organization, the United States Maritime Service also uses the rank of captain. Even though the Maritime Service is an auxiliary service, the grade is appointed by the President via the Secretary of Transportation, making it a federally recognized rank with corresponding paygrade of O-6.