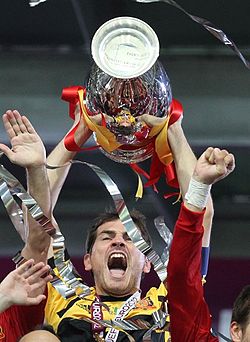 Iker Casillas lifting the Euro 2012 trophy, as the captain of Spain.

The team captain of an association football team, sometimes known as the skipper,[1] is a team member chosen to be the on-pitch leader of the team: it is often one of the older or more experienced members of the squad, or a player that can heavily influence a game. The team captain is usually identified by the wearing of an armband.[2]

The only official responsibility of a captain specified by the Laws of the Game is to participate in the coin toss prior to kick-off[3] (for choice of ends) and prior to a penalty shootout. Contrary to what is sometimes said, captains have no special authority under the Laws to challenge a decision by the referee.[4] However, referees may talk to the captain of a side about the side's general behaviour when necessary.[5]

At an award-giving ceremony after a fixture like a cup competition final, the captain usually leads the team up to collect their medals. Any trophy won by a team will be received by the captain who will also be the first one to hoist it. The captain also generally leads the teams out of the dressing room at the start of the match.

The captain generally provides a rallying point for the team: if morale is low, it is the captain who will be looked upon to boost their team's spirits.[6]

Captains may join the manager in deciding the first team for a certain game. In youth or recreational football, the captain often takes on duties, that would, at a higher level, be delegated to the manager.

A club captain is usually appointed for a season. If he is unavailable or not selected for a particular game, then the club vice-captain will be appointed to perform a similar role. 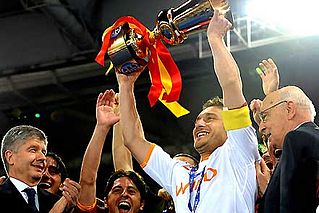 A club may appoint two distinct roles: a club captain to represent the players in a public relations role, and correspondent on the pitch. Manchester United has had both of these types of captains; Roy Keane was the club captain on and off the pitch from 1997 to 2005 as he was a regular in the starting eleven, but his successor Gary Neville while nominally club captain from 2005 to 2010 had made few first team appearances due to injuries and in his absence other players (Rio Ferdinand or vice-captain Ryan Giggs) were chosen to skipper the team on the field, such as in the 2008 (Ferdinand was captain as he was in the starting XI, while Giggs was a substitute) and 2009 UEFA Champions League Finals, respectively.[8] After Neville retired in 2011, regular starter Nemanja Vidić was named as club captain.

São Paulo's Rogério Ceni is currently the player who has worn the captain's armband the most times (802, as March 31, 2013), all playing for São Paulo.[citation needed]

A vice-captain (or assistant captain) is a player that is expected to captain the side when the club's captain is not included in the starting eleven, or if, during a game, the captain is substituted or sent off. Examples include Manuel Neuer succeeding Philipp Lahm at Bayern Munich and Marcelo taking over from Sergio Ramos at Real Madrid.

In the 1986 FIFA World Cup, when Bryan Robson was injured and vice-captain Ray Wilkins received a two-game suspension for a red card, Peter Shilton became England's skipper for the rest of the tournament.

During the 2010 FIFA World Cup in South Africa, Germany had three captains. Michael Ballack had skippered the national team since 2004, including the successful qualifiers for the 2010 World Cup, but he did not play in the latter tournament due to a last minute injury. Philipp Lahm was appointed captain in South Africa, but due to an illness that ruled him out of Germany's final fixture, Bastian Schweinsteiger skippered the team for that game which was the third-place match. Lahm stated in an interview that he would not relinquish the captaincy when Ballack returned, causing some controversy, so team manager Oliver Bierhoff clarified the situation saying "Philipp Lahm is the World Cup captain and Michael Ballack is still the captain".[9][10] Lahm ended up becoming the permanent captain of Germany, as Ballack was never again called up for the national team.[11][12]