From Infogalactic: the planetary knowledge core
Jump to: navigation, search
This article is about the fictional character. For other uses, see Captain Nemo (disambiguation).

Captain Nemo /ˈniːmoʊ/ (Latin for "Nobody")—also known as Prince Dakkar—is a fictional character created by the French science fiction author Jules Verne (1828–1905). Nemo appears in two of Verne's novels, Twenty Thousand Leagues Under the Sea (1870) and The Mysterious Island (1874), a cameo appearance in Verne's play Journey Through the Impossible (1882).

Nemo, one of the best known antiheroes in fiction, is a mysterious figure. The son of an Indian Raja, he is a scientific genius who roams the depths of the sea in his submarine, the Nautilus, which was built in pieces all over the world and shipped to the builder. Nemo tries to project a stern, controlled confidence, but he is driven by a thirst for vengeance and a hatred of imperialism focused on the British Empire. He is also wracked by remorse over the deaths of his crew members and even by the deaths of enemy sailors.

Nemo has appeared in various adaptations of Verne's novels, including films, where he has been portrayed by a number of different actors. He has also been adopted by other authors for inclusion in their novels, most notably in Alan Moore's The League of Extraordinary Gentlemen and Philip José Farmer's The Other Log of Phileas Fogg.

Nemo is, moreover, the Latin rendering of Ancient Greek Outis ("Nobody"), the pseudonym adopted by Odysseus, in Greek mythology—a ruse employed to outwit the cyclops Polyphemus. 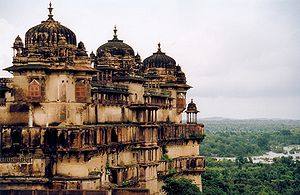 Nothing concerning his past is revealed in Twenty Thousand Leagues Under the Sea, except his dislike of imperialism (and of British imperial society more generally) and the apparent loss of his family in the past.

In The Mysterious Island, Captain Nemo identifies himself as Prince Dakkar, son of the Hindu Raja of Bundelkund, and also a descendant of the Muslim Sultan Fateh Ali Tipu of the Kingdom of Mysore, famous for the Anglo-Mysore Wars. After the First Indian War of Independence of 1857, in which Dakkar lost his family and his kingdom, he devoted himself to scientific research and developed the Nautilus, wherein he and a crew of followers cruise the seas. They gather bullion from various shipwrecks in the oceans, most notably the wrecks of the Spanish treasure fleet in Bay of Vigo, sunk during the Battle of Vigo Bay. He claims to have no interest in the affairs of the world above, but occasionally he intervenes to aid the oppressed, such as by giving salvaged treasure to participants in the Cretan Revolt (1866-1869) against the island's Turkish rulers and by saving (both physically and financially) a Ceylonese or Tamil pearl hunter from a diving accident, or by saving the castaways from drowning in Twenty Thousand Leagues Under the Sea and covertly protecting another set of castaways in The Mysterious Island.

Like many actual Indian princes of the era, Nemo had a European or English education, in which (he states) he spent his youth studying and touring Europe. In his first meeting with Professor Aronnax and his companions, they speak to him in French, English, Latin and German; Nemo later reveals that he is fluent in all of these. Aronnax comments that Nemo's French was perfect, and relies on his intuition and knowledge of ethnology to infer that he was from southern latitudes; but is unable to determine his origin. The Nautilus's library and art collection reveal Nemo to be familiar with European culture and arts. Further, he was an accomplished player of the organ.

Nemo is said to have died of old age, on board the Nautilus, at Dakkar Grotto on Lincoln Island in the South Pacific. Funeral rites were administered by Cyrus Smith, one of the castaways protected by Nemo himself, and his vessel was then submerged in the waters of the grotto. 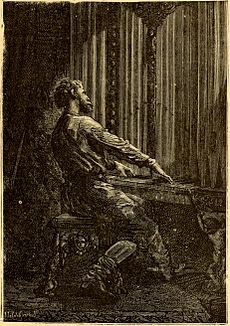 Captain Nemo playing the organ, at which he was a master.

Nemo's character in the novels is largely seen through the observations of Professor Pierre Aronnax, the narrator of Twenty Thousand Leagues Under the Sea, when Nemo is about forty years of age and described as a reticent man, tall and swarthy in appearance, with a straight nose and wide-set eyes. In The Mysterious Island, the aged Captain Nemo sports a long white beard.

He avoids dry land, except when it's uninhabited, as with Antarctica and desert islands. In keeping with his contempt for the nations of the surface, he uses no products that are not marine in nature, be it food, clothing, furnishing, or even tobacco. Little is revealed about his political opinions except an almost maniacal hatred of oppression, with which he identifies all the imperialistic nations of the world. He therefore identifies himself with those oppressed, be they Cretans rising against the Turks, Ceylonese pearl divers, or even black whales attacked by cachalots (sperm whales). When Professor Aronnax alleges that Nemo violates maritime and international law by sinking war-ships, Nemo responds that he is merely defending himself from his attackers, and that the laws of the world on the surface no longer apply to him. In one scene, Nemo exclaims:

"On the surface, they can still exercise their iniquitous laws, fight, devour each other, and indulge in all their earthly horrors. But thirty feet below the (sea's) surface, their power ceases, their influence fades, and their dominion vanishes. Ah, monsieur, to live in the bosom of the sea! ....

There I recognize no master! There I am free!"[1] 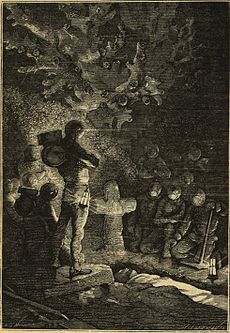 Nemo is devoted to his crew and grieves deeply when one is killed in the giant squid attack in the Caribbean Sea, or after a midnight encounter with a surface ship. He shows the same compassion in his treatment of the castaways in The Mysterious Island, and retains a strong attachment to his deceased wife and children. Though short-tempered, he rarely expresses his anger. He is also a man of immense courage, in the forefront of every activity, from releasing the Nautilus from the Antarctic ice to fighting squid in the Caribbean; and notable for having worked consecutive eight-hour shifts without a break, with little oxygen, to free the Nautilus from the ice. He was also identified as having discovered Atlantis.

An extraordinary engineer, Nemo has designed and built the Nautilus, besides inventing her electric propulsion and navigation systems. He has an exceptional mastery of underwater navigation, taking upon himself the most difficult submarine passages, such as those under the Isthmus of Suez and the Antarctic ice sheet. 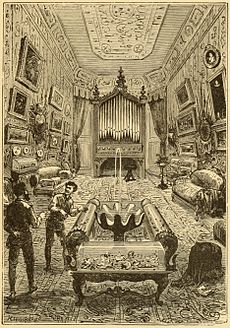 The Grand Salon of the Nautilus

He has a comprehensive knowledge of marine biology, and it is his respect for Professor Aronnax's expertise in the field which led to his befriending the professor when the latter was cast upon the Nautilus. Further, he is said to have read and annotated all the books he possessed in the Nautilus's vast library.

He has very fine taste in art, possessing several masterpieces of both painting and sculpture, from ancient and modern European masters, all of which are housed in the Grand Salon of the Nautilus, along with his collection of pearls, corals and other such marine products, which he had gathered himself. In the opinion of Professor Aronnax, the collection of the Grand Salon far outstrips that of the Louvre. Despite the opulence visible all through the Nautilus, Nemo's cabin was furnished with little beside a bed and the navigational instruments integral to the Nautilus. Captain Nemo is believed to be extremely affluent, in that while he never states exactly how much he is worth, he claims that 'without missing it, he could pay the national debt of France'. At the time of Twenty Thousand Leagues Under the Sea's publication, this was worth 4,600,000,000 francs, or $16,454,045,553.54 U.S. dollars in 2011.

Nemo tells Professor Aronnax that his intention was to have his autobiography sealed in an unsinkable casket and thrown overboard by the last survivor of the Nautilus's crew, in the hope that it would be washed up somewhere. Accordingly an unsinkable casket does wash up in The Mysterious Island (wherein is revealed Nemo's background story), containing tools, guns, navigation instruments, an atlas, books, blank paper, and even clothing. The crate is lashed to empty barrels, and the contents sealed in a waterproof zinc envelope, showing careful preparation and packing. Throughout the same book, Nemo acts as an agent of Divine Providence, as when the sailor Pencroff laments the absence of tobacco, and a hunting party discover a plant that the young naturalist Harbert identifies as such. The other castaways keep the discovery secret until they can dry and cure the leaves. One evening, Pencroff is offered some coffee by his friends. When he declines, they say, "A pipe, then?" and produce a homemade pipe stuffed full, with a coal to light it. Pencroff exclaims, "O, divine Providence! sacred Author of all things!...Nothing more is now wanting to our island".[2]

His emblem, as given in a description of the flag he raised when claiming Antarctica, is a large golden N on a black field. The motto of the Nautilus was Mobilis in mobili, which may be roughly translated from Latin as, "moving amidst mobility", "moving within the moving element", or "changing in the changes".

The motto of the Nautilus

In the initial draft of Twenty Thousand Leagues Under the Sea, Nemo was a Polish noble, a member of the szlachta, resenting the murder of his family during the Russian repression of the January Uprising; but Verne's editor Pierre-Jules Hetzel feared a book ban in the Russian market and offending a French ally, the Russian Empire, and had Verne obscure Nemo's motivation in the first book.[3][4] In the second book of Twenty Thousand Leagues under the Sea, Nemo comes close to revealing his Indian ancestry, though this is not obvious except in retrospect, where he saves a Ceylonese pearl-fisher in the Gulf of Mannar.

Many errors in the original French first printing (the 'grand in-8' published by Pierre-Jules Hetzel) are likely the fault of the editors who, at that time, were unlikely to consult the authors of the books they edited before making a change. According to the new, full translation put out by the Naval Institute Press, nearly all errors can be attributed to the editors, with only a few being the fault of Jules Verne, who was otherwise meticulous. The inconsistency of the dates between Twenty Thousand Leagues Under the Sea and The Mysterious Island is perhaps evidence in this argument, as it seems unlikely that Verne would make such an obvious gaffe.

The Nautilus goes down in the Maelstrom on June 2, 1868, according to 20,000 Leagues Under The Sea, but may have survived. (The Mysterious Island gives this date as June 22, 1867.) Captain Nemo dies on the Nautilus under Lincoln Island in The Mysterious Island on October 15, 1868. Therefore, some chronological inconsistencies still exist: Cyrus and Gideon knew of Captain Nemo years before Aronnax published his story, Nemo being trapped under Lincoln Island all during the time in 20,000 Leagues Under The Sea.

In most subsequent media adaptations of 20,00 Leagues and Mysterious Island, Nemo is (in a deviation from Verne's novels) depicted as a European.

Besides his original appearance in Twenty Thousand Leagues Under the Sea and The Mysterious Island, Captain Nemo also appears in numerous other works, though none written by Jules Verne, and all works were created decades after the original books.