The Captaincy General of Cuba (Spanish: Capitanía General de Cuba) was an administrative district of the Spanish Empire created in 1607 as part of Habsburg Spain's attempt to better defend the Caribbean against foreign powers, which also involved creating captaincies general in Puerto Rico, Guatemala and Yucatán. The restructuring of the Captaincy General in 1764 was the first example of the Bourbon Reforms in America. The changes included adding the provinces of Florida and Louisiana and granting more autonomy for these provinces. This later change was carried out by the Count of Floridablanca under Charles III to strengthen the Spanish position vis-a-vis the British in the Caribbean. A new governor-captain general based in Havana oversaw the administration of the new district. The local governors of the larger Captaincy General had previously been overseen in political and military matters by the president of the Audiencia of Santo Domingo. This audiencia retained oversight of judicial affairs until the establishment of new audiencias in Puerto Príncipe (1800) and Havana (1838). In 1825, as a result of the loss of the mainland possessions, the Spanish government granted the governors-captain generals of Cuba extraordinary powers in matters of administration, justice and the treasury and in the second half of the 19th century gave them the title of Governor General.

Since the 16th century the island of Cuba had been under the control of the governor-captain general of Santo Domingo, who was at the same time, president of the audiencia there. He oversaw the local governor and the Santo Domingo Audiencia heard appeals from the island.

The conquest of Cuba was organized in 1510 by the recently restored Viceroy of the Indies, Diego Colón, under the command of Diego Velázquez de Cuéllar, who became Cuba's first governor until his death in 1524. The new settlers did not wish to be under the personal authority of Colón, so Velázquez founded the city of Nuestra Señora de la Asunción de Baracoa in 1511 and convoked a general cabildo (a local government council), which was duly authorized to deal directly with Spain. This legal move removed Velázquez and the settlers from under the authority of Colón, their nominal superior. It was a precedent that would come back to haunt Velázquez during Hernán Cortés's conquest of Mexico. Other cities were later founded under Velázquez: Bayamo in 1513; Santísima Trinidad, Sancti Spíritus and San Cristóbal de La Habana in 1514; Puerto Príncipe and Santiago de Cuba in 1515. After the conquest of Mexico, Cuba experienced an exodus of settlers, and its population remained small for the next two centuries.

In 1565 the Adelantado Pedro Menéndez de Avilés, who was also Captain General of the Spanish treasure fleet which rendezvoused in Havana, established the first permanent Spanish settlement in Florida, San Agustín, initially bringing the province under the administrative control of Cuba, although due to distance and sea currents, Florida's government was granted the right to correspond directly with the Council of the Indies.

In 1607 Philip III created the Captaincy General of Cuba as part of larger plans to defend the Caribbean against foreign threats. The first captain general was Pedro Valdés. Around the same time other captaincies general were established in Puerto Rico (1580) and Central America (1609). Cuba was divided into two governorships with capitals in Havana and Santiago de Cuba. The governor of Havana was Captain General of the island. In 1650 Cuba received a large influx of refugees when the British conquered Jamaica and expelled the Spanish residents there.

In 1756 the construction of ships for the Royal Navy began with the establishment of an Intendancy of the Navy was established in Havana, which functioned as a royal shipyard. 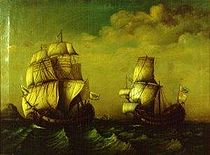 A Spanish frigate towing a British ship to Havana. Oil on canvas, c. 1770.

The British conquest of the island in 1762 during the Seven Years' War proved to be a turning point in the history of Cuba and Spanish America in general. The British captured Havana after a three-month siege and controlled the western part of the island for a year. Britain returned Cuba in exchange for Florida in the Treaty of Paris (1763). The events revealed not only the weaknesses of the region's defenses but also proved just how much the Cuban economy had been neglected by the Spanish. During the year they controlled Cuba, the British conducted an unprecedented amount of trade with the island.[1] A year earlier France had secretly ceded Louisiana to Spain in compensation for its losses as its ally during the war.

As a sign of the seriousness with which the government took the problems, the very year the Spanish retook control of Havana construction began on what would become the largest Spanish fort in the New World, San Carlos de la Cabaña on the eastern side of the entrance to harbor of Havana.

Starting in 1764 the government apparatus of Cuba was completely reworked. A report on the island was created by Alejandro O'Reilly, which provided the basis for the changes. A new emphasis was placed on appointing military men to the governorship-captaincy general of Cuba, many of whom were later rewarded with the post of Viceroy of New Spain. To aid the captain general of Cuba, the governor of Santiago was made captain general of the province and given command of the military forces there. At the same time a new institution, which up until now had only been used in Spain, was introduced into Cuba: the intendancy. An intendencia de hacienda y guerra was set up in Havana to oversee government and military expenditures and to promote the local economy. The first Intendant, Miguel de Altarriba arrived on March 8, 1765. Other intendancies soon followed: Louisiana (1766), Puerto Príncipe (1786) and Santiago de Cuba (1786). In 1774 the first census of the island was carried out, revealing 171,670 inhabitants, and other measures were taken to improve the local economy.

These reforms, especially the institution of the intendancy, initiated a dramatic social and economic transformation of the island during the last half of the 18th century and early 19th. Cuba went from being a defensive post in the Caribbean sustained by a subsidy from New Spain, the situado, to becoming a self-sustaining and flourishing, sugar-, coffee- and tobacco-exporting colony, which also meant that large number of slaves were imported into Cuba. The agricultural economy was aided by the gradual opening of Cuban ports to foreign ships, especially after the loss of the mainland due to the independence wars.

During the American Revolutionary War Spain recaptured colonial Florida (which at that time included Gulf Coast lands extending all the way to the Mississippi River) from Great Britain, which was ratified in the 1783 Treaty of Paris. But, within about 35 years, all of this territory was incrementally obtained by the U.S.; this was due in part to boundary disputes.

The transfer of the Spanish part of Santo Domingo to France in 1795 in the Treaty of Basel, made Cuba the main Spanish possession in the Caribbean. The Audiencia of Santo Domingo was formally moved to Santa María del Puerto Príncipe (today, Camagüey) five years later, after temporarily residing in Santiago de Cuba. (It resided in Havana for a few years starting in 1808 before returning to Camagüey.)

The Church also experienced growth. In 1787 a Diocese of San Cristóbal de La Habana was established, which included Florida and Louisiana in its territory. In 1793 the Diocese of Louisiana and the Two Floridas was established. Both were suffragan to the Archdiocese of Santo Domingo, but after the Treaty of Basel, it disappeared, so Santiago de Cuba was elevated to an Archdiocese with the above-mentioned dioceses suffragan to it, as well as the Diocese of Puerto Rico.

The Spanish Constitution of 1812 enacted by the Cádiz Cortes declared the territory of the Captaincy General an integral part of the Spanish Monarchy and transformed it into a province with its own elected diputación provincial, a governing board with joint administrative and limited legislative powers. Municipalities were also granted locally elected cabildos. The provincial deputation and cabildos functioned while the Constitution was in force from 1812 to 1814 and 1820 to 1823. Ultimately the Constitution was abolished by Ferdinand VII.

The death of Ferdinand VII brought about new changes. Regent María Cristina reconvened the Cortes, in its traditional form with three estates. In 1836, Constitutional government was reestablished in Spain, except this time the government in Spain, despite its liberal tendencies, defined the overseas territories as colonies, which should be governed by special laws. The democratic institutions, such as the Diputación Provincial and the cabildos, established by the 1812 Constitution were removed. The new Constitution of 1837 ratified Cuba's demoted status. Worse still, the "special laws", by which the overseas areas were to be governed, were not drafted until three decades later, when a special Junta Informativa de Reformas de Ultramar (Overseas Informative Reform Board), with representatives from Cuba and Puerto Rico, was convened in 1865. Even then its proposals were never made into laws.

On 24 August 1821 New Mexican republic under Emperor Don Agustin de Iturbide, gave back the Island of Cuba and its Captaincy to the Spanish crown in good faith.

In the 1830s, judicial affairs were restructured. An Audiencia of Havana was created in 1838, with the jurisdiction of the Puerto Príncipe Audiencia limited to the east and center of the island. (The latter was temporarily abolished from 1853 to 1868.)

By mid-century a definite pro-independence movement had coalesced, and Cuba experienced three civil wars in thirty years that culminated in a US intervention and the island's eventual independence: the Ten Years' War (1868–1878), the Little War (1879–1880) and the War of Independence, which became the Spanish–American War. During the last war the issue of autonomy came to a head. In 1895 the Overseas Minister, with approval from the Prime Minister, took the extra-constitutional step in 1897 of writing the Constitución Autonómica, which granted the Caribbean islands autonomy, technically bringing the Captaincy General to an end. Given the urgency of the movement, the government approved this unusual measure. The new government of the island was to consist of "an Island Parliament, divided into two chambers and one Governor-General, representative of the Metropolis, who will carry out his duties in its name, the supreme Authority."[2] The new government functioned only for a few months before the United States took control of the island.