The Captaincy General of Santo Domingo was the first colony in the New World and was claimed for Spain. The island was originally named "La Española" (Hispaniola) by Christopher Columbus. From 1511, the courts of the colony were placed under the jurisdiction of the Royal Audiencia of Santo Domingo. In the 17th century, after years of struggles with the French, the Spanish lost the western third of the island.[1][2] The Spanish remained in control of the eastern two-thirds of the island, which later became the Dominican Republic.

The colony of Santo Domingo played a significant role in the establishment of Spanish colonies in the New World serving as a headquarters for Spanish conquistadors on their way to the conquest of the Americas.

Arrival of the Europeans

Columbus reached the island on his first voyage, on December 5, 1492, naming it La Española. Believing that the Europeans were in some way supernatural, the Taínos welcomed them with all the honors available. This was a totally different society from the one the Europeans came from. Guacanagarí, the chief who hosted Christopher Columbus and his men, treated them kindly and provided them with everything they desired. Yet the Taínos' allegedly "egalitarian" system clashed with the Europeans' feudalist system, with more rigid class structures. This led the Europeans to believe the Taínos to be either weak or misleading, and they began to treat the tribes with more violence. Columbus tried to temper this when he and his men departed from Ayiti—as the Taínos called the island—and they left on a good note.

Columbus had cemented a firm alliance with Guacanagarix, who was a powerful chief on the island. After the shipwrecking of the Santa María, Columbus decided to establish a small fort with a garrison of men that could help him lay claim to this possession. The fort was called La Navidad, since the events of the shipwrecking and the founding of the fort occurred on Christmas Day. The garrison, in spite of all the wealth and beauty on the island, was wracked by divisions that evolved into conflict amongst these first Europeans. The more rapacious ones began to terrorize the Taíno, Ciguayo and Macorix tribesmen up to the point of trying to take their women. Viewed as weak by the Spaniards and even some of his own people, Guacanagarix tried to come to an accommodation with the Spaniards, who saw his appeasement as the actions of someone who submitted. They treated him with contempt and even took some of his wives. The powerful cacique of the Maguana, Caonabo, could brook no further affronts and attacked the Europeans, destroying La Navidad. Guacanagarix was dismayed by this turn of events but did not try too hard to aid these guamikena, probably hoping that the troublesome outsiders would never return. However, they did return.

In 1493, Christopher Columbus came back to the island on his second voyage and founded the first Spanish colony in the New World, the city of Isabella. In 1496, his brother Bartholomew Columbus established the settlement of Santo Domingo de Guzmán on the southern coast, which became the new capital. An estimated 400,000 Tainos living on the island were soon enslaved to work in gold mines. As a consequence of oppression, forced labor, hunger, disease, and mass killings, it is estimated that by 1508 that number had been reduced to around 60,000. By 1535, only a few dozen were still alive.[3]

During this period, the Spanish leadership changed hands several times. When Columbus departed on another exploration, Francisco de Bobadilla became governor. Settlers' charges against Columbus of mismanagement added to the tumultuous political situation. In 1502, Nicolás de Ovando replaced de Bobadilla as governor, with an ambitious plan to expand Spanish influence in the region. It was he who dealt most brutally with the Taínos.

One rebel, however, successfully fought back. Enriquillo, leading a group of those who had fled to the mountains, attacked the Spanish repeatedly for fourteen years. Finally, the Spanish offered him a peace treaty. In addition, they gave Enriquillo and his followers their own city in 1534. The city did not last long, however; several years after its establishment, a slave rebellion burned it to the ground, killing anyone who stayed behind. 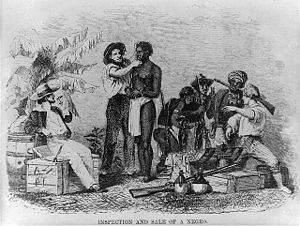 Inspection and sale of African slaves.

In 1501, the Spanish monarchs, Ferdinand I and Isabella, first granted permission to the colonists of the Caribbean to import African slaves, which began arriving to the island in 1503. In 1510, the first sizable shipment, consisting of 250 Black Ladinos, arrived in Hispaniola from Spain. Eight years later African-born slaves arrived in the West Indies. Sugar cane was introduced to Hispaniola from the Canary Islands, and the first sugar mill in the New World was established in 1516.[4] The need for a labor force to meet the growing demands of sugar cane cultivation led to an exponential increase in the importation of slaves over the following two decades. The sugar mill owners soon formed a new colonial elite, and initially convinced the Spanish king to allow them to elect the members of the Real Audiencia from their ranks. Poorer colonists subsisted by hunting the herds of wild cattle that roamed throughout the island and selling their hides.

The first major slave revolt in the Americas occurred in Santo Domingo during 1522, when enslaved Muslims of the Wolof nation led an uprising in the sugar plantation of admiral Don Diego Colon, son of Christopher Columbus. Many of these insurgents managed to escape to the mountains where they formed independent maroon communities.

While sugar cane dramatically increased Spain's earnings on the island, large numbers of the newly imported slaves fled into the nearly impassable mountain ranges in the island's interior, joining the growing communities of cimarrónes-literally, 'wild animals'. By the 1530s, cimarron bands had become so numerous that in rural areas the Spaniards could only safely travel outside their plantations in large armed groups. By the 1540s, the Caribbean Sea had become overrun with English, French and Dutch pirates. In 1541 Spain authorized the construction of Santo Domingo's fortified wall, and decided to restrict sea travel to enormous, well-armed convoys. In another move, which would destroy Hispaniola's sugar industry, Havana, more strategically located in relation to the Gulf Stream, was selected as the designated stopping point for the merchant flotas, which had a royal monopoly on commerce with the Americas. In 1564, the island's main inland cities Santiago de los Caballeros and Concepción de la Vega were destroyed by an earthquake.

French acquisition and the Haitian Revolution

With the conquest of the American mainland, Hispaniola slowly declined. Many Spanish colonists left for the silver-mines of the American mainland, while new immigrants from Spain bypassed the island. Agriculture dwindled, new imports of slaves ceased, and white colonists, free blacks and slaves alike lived in poverty, weakening the racial hierarchy and aiding intermixing, which resulted in a population of predominantly mixed Spaniard, African, and Taino descent. Except for the city of Santo Domingo, which managed to maintain some legal exports, Dominican ports were forced to rely on contraband trade, which, along with livestock, became the sole source of livelihood for the island dwellers. In 1586, Sir Francis Drake captured the city of Santo Domingo, collecting a ransom for its return to Spanish rule.

In 1605, Spain, unhappy that Santo Domingo was facilitating trade between its other colonies and other European powers, attacked vast parts of the colony's northern and western regions, forcibly resettling their inhabitants closer to the city of Santo Domingo.[5] This action, known as the devastaciones, proved disastrous; more than half of the resettled colonists died of starvation or disease.[6] French and English buccaneers took advantage of Spain's retreat into a corner of Hispaniola to settle the island of Tortuga in 1629, which France established direct control over in 1640, reorganizing it into an official colony and expanding to the north coast of Hispaniola itself. Spain ceded the western end of the island to France in 1697, under the Treaty of Ryswick. In 1655, Oliver Cromwell dispatched a fleet, commanded by Admiral Sir William Penn, to conquer the colony. After being defeated at Santo Domingo on April 30, the English retreated, taking the island of Jamaica instead.

The House of Bourbon replaced the House of Habsburg in Spain in 1700 and introduced economic reforms that gradually began to revive trade in Santo Domingo. The crown progressively relaxed the rigid controls and restrictions on commerce between Spain and the colonies and among the colonies. The last flotas sailed in 1737; the monopoly port system was abolished shortly thereafter. By the middle of the century, the population was bolstered by emigration from the Canary Islands, resettling the northern part of the colony and planting tobacco in the Cibao Valley, and importation of slaves was renewed. The population of Santo Domingo grew from about 6,000 in 1737 to approximately 125,000 in 1790. Of this number, about 40,000 were white landowners, about 25,000 were black or mulatto freedmen, and some 60,000 were slaves. However, it remained poor and neglected, particularly in contrast with neighboring French Saint-Domingue, which became the wealthiest colony in the New World.[7] As restrictions on colonial trade were relaxed, the colonial elites of St. Domingue offered the principal market for Santo Domingo's exports of beef, hides, mahogany and tobacco.

With the outbreak of the Haitian Revolution, the rich urban families linked to the colonial bureaucracy fled the island, while most of the rural hateros (cattle ranchers) remained, even though they lost their principal market. Spain saw in the unrest an opportunity to seize all, or part, of the western region of the island in an alliance of convenience with the British and the rebellious slaves. They were defeated by the forces of the black Jacobin General Toussaint L'Ouverture, and in 1795, France gained control of the whole island under the Treaties of Basel.