From Infogalactic: the planetary knowledge core
Jump to: navigation, search
For the 1573 battle, see Capture of Geertruidenberg (1573).

The Capture of Geertruidenberg of 1589, also known as the English betrayal of Geertruidenberg, took place on April 10, 1589, at Geertruidenberg, Duchy of Brabant, Flanders (present-day the Netherlands), during the Eighty Years' War and the Anglo-Spanish War (1585–1604).[1][2] On April 10, 1589, the garrison of Geertruidenberg, composed by a large number of English and some Dutch troops commanded by Governor Sir John Wingfield, surrendered the city to the Army of Flanders led by Don Alexander Farnese, Governor-General of the Spanish Netherlands (Spanish: Alejandro Farnesio).[2][3] Few days before, when pay did not arrive on time, the English soldiers mutinied, and was rumored that Wingfield had intended to surrender (or "sold") the city to the Spaniards.[4] The States-General and the Prince Maurice of Nassau (Dutch: Maurits van Oranje) accused him of treason for its surrender, but Wingfield denied the charges against him. The fact was that Geertruidenberg was in Spanish hands.[2][3] 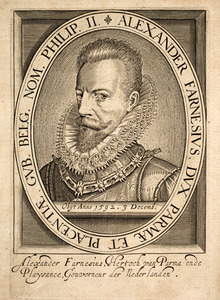 The same year, in September, Parma sent a force, under the Count Peter Ernst of Mansfeld, to besiege Rheinberg.[5] The garrison, commanded by Sir Francis Vere, capitulated to the Spaniards in February 1590.[5][6]