From Infogalactic: the planetary knowledge core
Jump to: navigation, search
Not to be confused with Carvel (boat building). 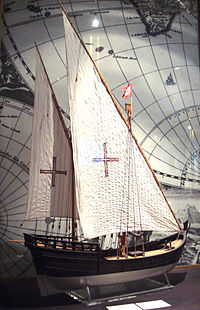 Portuguese caravel. This was the standard model used by the Portuguese in their voyages of exploration. The lateen rigged caravel was able to sail close to the wind, closer than square rigged vessels. It could accommodate about 20 sailors.[1]

A caravel (Portuguese: caravela, IPA: [kɐɾɐˈvɛlɐ]) is a small, highly maneuverable sailing ship developed in the 15th century by the Portuguese to explore along the West African coast and into the Atlantic Ocean. The lateen sails gave her speed and the capacity for sailing windward (beating). Caravels were used by the Portuguese for the oceanic exploration voyages during the 15th and 16th centuries in the Age of Discovery. 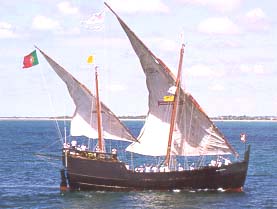 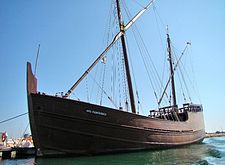 A replica of the caravel Boa Esperança in the city of Lagos, Portugal

Until the 15th century, Europeans were limited to coastal cabotage navigation using the barge (barca) or the balinger (barinel), ancient cargo vessels of the Mediterranean Sea with a capacity of around 50 to 200 tons. These boats were fragile, with only one mast with a fixed square sails that could not overcome the navigational difficulties of southward oceanic exploration, as the strong winds, shoals and strong ocean currents easily overwhelmed their abilities.

The caravel was developed in about 1451, based on existing fishing boats under the sponsorship of Henry the Navigator of Portugal, and soon became the preferred vessel for Portuguese explorers like Bartolomeu Dias, Vasco da Gama or Ferdinand Magellan. Its name may derive from an ancient boat type known as carabus in Latin and καραβος in Greek, later adopted into Arabic as qārib, indicating some continuity of its carvel build through the ages.[2] They were agile and easier to navigate than the barca and barinel, with a tonnage of 50 to 160 tons and 1 to 3 masts, with lateen triangular sails allowing beating. 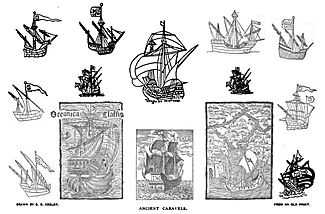 Being smaller and having a shallow keel, the caravel could sail upriver in shallow coastal waters. With the lateen sails attached, it was highly maneuverable and could sail much nearer the wind, while with the square Atlantic-type sails attached, it was very fast. Its economy, speed, agility, and power made it esteemed as the best sailing vessel of its time. The limited capacity for cargo and crew were their main drawbacks, but did not hinder its success.

The exploration done with caravels made the spice trade of the Portuguese and the Spanish possible. However, for the trade itself, the caravel was later replaced by the larger carrack (nau), which was more profitable for trading. The caravel was one of the pinnacle ships in Iberian ship development from 1400–1600.

Due to its lighter weight and thus greater speed, the caravel was a boon to sailors. Early caravels generally carried two or three masts with lateen sails, while later types had four masts. Early caravels such as the caravela tilhada of the 15th century had an average length of between 12 and 18 m (39 and 59 ft), an average capacity of 40 to 50 tons,[3] a high length-to-beam ratio of around 3.5 to 1, and narrow ellipsoidal frame (unlike the circular frame of the nau), making them very fast and maneuverable but with somewhat low capacity. Towards the end of the 15th century, the caravel was occasionally modified by giving it the same rig as a nau with a foresail, square mainsail and lateen mizzen, but not the carrack's high forecastle or much of a sternpalace, which would make it unweatherly. In this form it was sometimes known as caravela redonda (a bulging square sail is said to be round, redonda, in the Iberian tradition). It was in such ships that Christopher Columbus set out on his expedition in 1492; Santa María was a ~100 ton nau which served as the flagship and the Pinta and Niña were smaller caravels of around 15–20 m with a beam of 6 m and displacing around 60-75 tons. 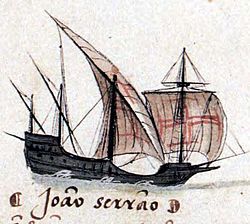 A typical round caravel or caravela de armada (of 1500-1505), with origin in the Portuguese model of caravela redonda or square-rigged caravel (Livro das Armadas). There were also some other European and Mediterranean types of ships, also called round caravels, during the turn of the century and in the 16th century

In the transition to the 16th century, the Portuguese created a specialized fighting ship also called the caravela redonda or square-rigged caravel (also caravela de armada) to act as an escort in Brazil and in the Indies route. It had a foremast with square sails and three other masts with a lateen each, for a total of 4 masts. The hull was galleon-shaped, and it is considered a forerunner of the fighting galleon. The Portuguese man o' war was named after the appearance of the man-of-war, which were in use until the 17th century.

Lisbon and the Tagus (1572). Galleon in the center (one type of Portuguese galleon), carracks, galley, round caravels, and caravels (lateen), among other vessels