From Infogalactic: the planetary knowledge core
Jump to: navigation, search
For other uses, see Caraway (disambiguation).

The plant is similar in appearance to other members of the carrot family, with finely divided, feathery leaves with thread-like divisions, growing on 20–30 cm stems. The main flower stem is 40–60 cm tall, with small white or pink flowers in umbels. Caraway fruits (erroneously called seeds) are crescent-shaped achenes, around 2 mm long, with five pale ridges.

The etymology of caraway is complex and poorly understood.

Caraway has been called by many names in different regions, with names deriving from the Latin cuminum (cumin), the Greek karon (again, cumin), which was adapted into Latin as carum (now meaning caraway), and the Sanskrit karavi, sometimes translated as "caraway" but other times understood to mean "fennel".[8]

English usage of the term caraway dates back to at least 1440,[9] and is considered by Skeat to be of Arabic origin, though Katzer believes the Arabic al-karawya (cf. Spanish alcaravea) to be derived from the Latin carum.[8] 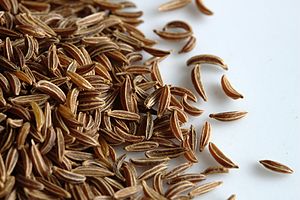 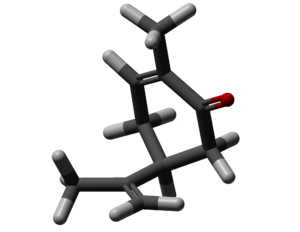 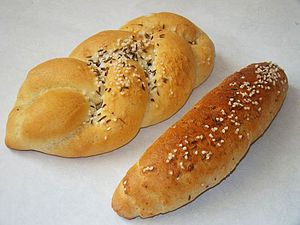 The fruits, usually used whole, have a pungent, anise-like flavor and aroma that comes from essential oils, mostly carvone and limonene.[10] Anethole, generally regarded as a minor product in the essential oil of this species, has also been found to be a major component.[11] Caraway is used as a spice in breads, especially rye bread.

Caraway is also used in desserts, liquors, casseroles, Indian cuisine rice dishes such as pulao and biryani, and other foods. It is also found in European cuisine. For example, it is used in caraway seed cake, and it is frequently added to sauerkraut.[12][13][14][15][16] The roots may be cooked as a vegetable like parsnips or carrots. Additionally, the leaves are sometimes consumed as herbs, either raw, dried, or cooked, similar to parsley.[5]

In Serbia, caraway is commonly sprinkled over home-made salty scones (pogačice s kimom). It is also used to add flavor to cheeses such as bondost, pultost and havarti. Akvavit and several liqueurs are made with caraway.

In Middle Eastern cuisine, caraway pudding is a popular dessert during Ramadan. Caraway is also added to flavor Harissa, a Maghrebian chili pepper paste. It is typically made and served in the Levant area in winter and on the occasion of having a new baby, In Aleppian, Syrian cuisine it is used to make the sweet scones named Keleacha.

The plant prefers warm, sunny locations and well-drained soil rich in organic matter. In warmer regions it is planted in the winter months as an annual. In temperate climates it is planted as a summer annual or biennial. There is however a polyploid variant (with four haploid sets=4n) of this plant that was found to be perennial.

Finland supplies approximately 28% (2011) of the world's caraway production.[17] Caraway cultivation is well suited to the Finnish climate and latitudes, which ensure long hours of sunlight in the summer. This results in fruits that contain higher levels of essential oils than those produced in other main growing areas which include Canada, the Netherlands, Egypt and central Europe.