Cardinal-Infante Ferdinand (May 1609 or 1610,[1] – 9 November 1641) (also known as Don Fernando de Austria, Cardenal-Infante Fernando de España and as Ferdinand von Österreich) was Governor of the Spanish Netherlands, Cardinal of the Holy Roman Church, Infante of Spain, Infante of Portugal (until 1640), Archduke of Austria, Archbishop of Toledo (1619–41), and military commander during the Thirty Years' War.

Born at the Escorial near Madrid, Spain in 16091, he was the son of the King of Spain and Portugal, Philip III and II and Margaret of Austria, sister of Emperor Ferdinand II.[2] His older siblings were King Philip IV and III and the French queen Anne of Austria.

As his father wished that he make an ecclesiastical career, Ferdinand was elevated to the Primacy of Spain in 1619, becoming Archbishop of Toledo.[3] Shortly afterwards he was created Cardinal. The style Cardinal-Infante was a combination of his dignity as Cardinal and his station as a royal Prince (Infante in Spanish) of Spain. Ferdinand was never actually ordained a priest (however he received the minor orders),[4] not unusual for royalty and members of the aristocracy, but nevertheless received clerical benefices carrying huge incomes along with them.

Events leading to the Battle of Nördlingen

In 1630 the Cardinal Infante's aunt Isabella Clara Eugenia planned to make him her successor as governor of the Spanish Netherlands. To move to the Netherlands in a style befitting to a governor, a strong army had to accompany him. Travel by ship from Spain was not an option, due to heavy risk of battle with the Dutch navy, regarded as unacceptable to bear up by a royal person. Therefore, he went to Genoa in 1633, so quitting his Governorship of Catalonia where he was duly trained, to meet with an army from Milan for a planned march through the famous Spanish Way across Lombardy, Tyrol, and Swabia, and then following the Rhine to the Netherlands. Ferdinand also planned to secure this supply route with a string of garrisons, and to support the army of King Ferdinand IV of Hungary, his brother-in-law the emperor's son and heir, who was leading the Imperial army facing the Swedes in the Thirty Years' War. Since disease delayed his travels, he sent half of his army ahead under the command of the Duke of Feria. However, this army was severely depleted during fighting with the Swedish army of Bernhard of Saxe-Weimar and Gustaf Horn. The Spanish requested 4000 cavalry from the Imperial general Albrecht von Wallenstein, but since Wallenstein declined the request the Spanish had to fund the troops on their own. The Cardinal-Infante was able to continue his travels in 1634, collecting in Bavaria the remains of the army of Gómez Suárez, who had died in January 1634.

Meanwhile, Ferdinand of Hungary was able to defeat the Swedish army at Regensburg in July 1634. This Ferdinand and his cousin the Cardinal-Infante Ferdinand then raced to merge their armies. The Swedish forces of Bernhard of Saxe-Weimar and Gustaf Horn desperately tried to prevent this merger, but were unable to catch up with Ferdinand of Hungary. The Cardinal-Infante crossed the Danube in August 1634. In September both armies were able to merge, and camped south of Nördlingen in Swabia. At that time Nördlingen was protected by a small Swedish garrison. Shortly thereafter, the armies of Bernhard of Saxe-Weimar and Gustaf Horn also reached Nördlingen, preparing the events for the decisive Battle of Nördlingen. Cardinal-Infante Ferdinand and his nephew Ferdinand then prepared for battle, ignoring the advice of the more experienced generals, such as the Imperial general Matthias Gallas. Bernhard and Horn also prepared for battle, but they were by now rivals and in disagreement with each other. They also underestimated the numerically superior enemy forces, due to incorrect reports that did not realize the Spanish Army of the late Duke of Feria had joined the Cardinal-Infante and believed that the enemy forces numbered only 7,000, not 21,000 infantry, compared to 16,000 Swedish infantry. During the battle, almost anything that could go wrong went wrong for the Swedish forces, due to the strong defensive efforts of the Spanish Infantry (the most feared Tercios Viejos, mainly those commanded by Fuenclara, Idiáquez and Toralto) after pushing back fifteen Swedish assaults against Blue and Yellow Horn regiments on the hill of Albuch they protected, so the two Ferdinands achieved an outstanding military victory. Gustaf Horn was captured, the Swedish army was destroyed, and the remainder that fled to Heilbronn was only a shadow of the former glorious army. As a whole this battle proved that the deployment improvements deviced by Maurice of Orange and the late Swedish King did not match yet the old Tercio when Spanish troops were engaged in the fighting.

The King of Hungary tried to convince his cousin to stay and to strengthen their hold on Germany, but the Cardinal-Infante Ferdinand moved his troops almost immediately after the battle to continue to Brussels. At the end of 1634 he entered Brussels with all the glory befitting a Governor-General. Due to the unpopularity of the clergy in Brussels, he downplayed his religious status and instead emphasized his worldly ranks. Ferdinand was a skilled politician and diplomat, and quickly reformed the government and the military. He especially managed to win the support of the Flemings against France.

However, his powers were secretly limited, and the leader of his army was instructed to follow Spanish orders instead of Ferdinand's orders if necessary. In 1635 the French attacked Namur, planning to merge with the Dutch near Maastricht. However, the Dutch hesitated, and the French retreated. Ferdinand subsequently was able to capture Diest, Goch, Gennep, Limbourg, and Schenk. 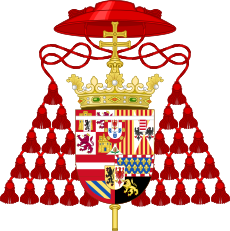 Coat of Arms of the Cardinal-Infante Ferdinand of Spain.

In 1636 Ferdinand disempowered the last Protestant priests in the Spanish Netherlands, and continued his military expansion by capturing Hirson, Le Catelet, and La Capelle, and securing Luxembourg using the usual mixed nationalities of a Modern Age Army that included then Croatian troops, and reaching as far a stronghold in France as Corbie, threatening Paris.

On October 10, 1637, Breda was recaptured again after a 10-month siege by the Prince of Orange after being under Spanish control for 12 years. The loss of Breda damaged the Spanish prestige in Europe, but in strategic terms that year Ferdinand greatly strengthened the Spanish position by taking the towns of Venlo and Roermond in the Meuse, effectively cutting Maastricht from the Dutch Republic and, thus, preventing further attacks on the Spanish Netherlands from the east.[5][6] In the southern front Ferdinand lost the towns of La Capelle, Landrecies, and Damvillers to the French, but then he forced them to retreat south of Maubeuge.[7]

In 1638 Ferdinand's army successfully defended Antwerp, Saint-Omer and Geldern from the Dutch and French armies.[8] Ferdinand achieved a decisive victory over the Dutch at the Battle of Kallo in June, when he took 2,500 Dutch prisoners, 81 river barges and a good amount of artillery.[6] In a letter to his brother the King shortly afterwards, Ferdinand described the battle as "the greatest victory which you Majesty's arms have achieved since the war in the Low Countries began".[9] The next year Ferdinand managed again to thwart the Franco-Dutch plans. The Dutch navy defeated an important Spanish fleet in the Battle of the Downs, off the English coast, but it failed to prevent the landing in Dunkirk of some 7,000 to 10,500 infantry soldiers.[10] While Ferdinand frustrated the Prince of Orange's move against Hulst, an Imperial army under Count Piccolomini destroyed the main French army in the south at the Battle of Thionville.[10]

In 1640 Dutch attacks over Hulst and Brugges were repelled by the local Spanish garrisons.[11] In the south, after a failed attack over the fortress of Charlemont in Givet, the French army launched a great offensive upon Arras, the capital of the County of Artois. Ferdinand took the command of the Spanish Army and attempted unsuccessfully to break the French lines. The city finally surrendered on 9 August. Its capture was the first victory of importance for the French in the war after five years of fighting.[12] 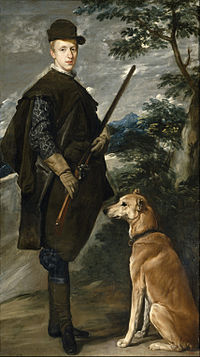 Cardinal-Infante Ferdinand of Austria as Actaeon

More dangerous than his military enemies were, however, his enemies at the Spanish court. Numerous rumors and lies floated about, and it was claimed that Ferdinand was planning to become an independent ruler of the Spanish Netherlands with the help of the French King, an enemy of Spain. This rumor was enhanced by another rumor that the French court was planning to marry Ferdinand to Anne Marie Louise d'Orléans, Duchess of Montpensier, the (eldest) daughter of Gaston, Duke of Orléans, the French king's brother. The former claim was untrue however his sister Anne of Austria did suggest a marriage between Ferdinand and Anne Marie Louise, the greatest heiress in Europe .

At the same time, the Spanish empire was in a bad state both military and financially. The Cardinal-Infante was even giving conflicting orders to send troops to Spain to aid against a Portuguese uprising.

Ferdinand fell ill during battles in 1641, and died on 9 November 1641 in Brussels at age 32.[13] It is believed that the death was caused by exhaustion combined with ill health. Reports talk about a stomach ulcer, but rumors also claimed that he was poisoned. Before his death he had an illegitimate daughter, Marie Anne de la Croix, born in Brussels in 1641 and died a nun in Madrid in 1715.

His body was brought to Spain in 1643, and 12,000 requiem Masses were performed in accordance with his last wishes. He was buried in the Panteón de Infantes escudos-de-cardenales-arzobispos/?pag=2

Disputes about his successor as the Governor-General of the Spanish Netherlands destroyed the alliance between the Emperor in Vienna and the Spanish in Madrid. The Emperor (by now the Cardinal-Infante's old comrade in arms, Ferdinand III) favored his brother Archduke Leopold Wilhelm of Austria, a militarily unfortunate but otherwise capable leader. Madrid favored John of Austria the Younger, the twelve-year-old illegitimate son of Philip IV and the actress María Calderón. The inauguration of the unpopular bastard was delayed, and Spain lost control of much of the Spanish Netherlands in the following years due to the incompetent rule of the interim governor Francisco de Mello, Marquis of Terceira.