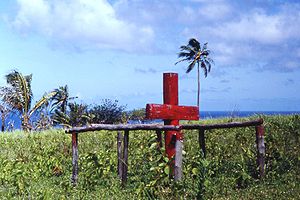 A cargo cult is a Melanesian millenarian movement encompassing a diverse range of practices and occurring in the wake of contact with the commercial networks of colonizing societies. The name derives from the belief that various ritualistic acts will lead to a bestowing of material wealth ("cargo").[1][2]

Cargo cults often develop during a combination of crises. Under conditions of social stress, such a movement may form under the leadership of a charismatic figure. This leader may have a "vision" (or "myth-dream") of the future, often linked to an ancestral efficacy ("mana") thought to be recoverable by a return to traditional morality.[1][3] This leader may characterize the present state regimes as a dismantling of the old social order, meaning that social hierarchy and ego boundaries have been broken down.[4]

Contact with colonizing groups brought about a considerable transformation in the way indigenous peoples of Melanesia have thought about other societies. Early theories of cargo cults began from the assumption that practitioners simply failed to understand technology, colonization, or capitalist reform; in this model, cargo cults are a misunderstanding of the trade networks involved in resource distribution and an attempt to acquire such goods in the wake of interrupted trade. However, many of these practitioners actually focus on the importance of sustaining and creating new social relationships, with material relations being secondary.[5]

Since the late twentieth century, alternative theories have arisen. For example, some scholars, such as Kaplan and Lindstrom, focus on Europeans' characterization of these movements as a fascination with manufactured goods and what such a focus says about Western commodity fetishism.[2] Others point to the need to see each movement as reflecting a particularized historical context, even eschewing the term "cargo cult" for them unless there is an attempt to elicit an exchange relationship from Europeans.[6]

Cargo cults are marked by a number of common characteristics, including a "myth-dream" that is a synthesis of indigenous and foreign elements; the expectation of help from the ancestors; charismatic leaders; and lastly, belief in the appearance of an abundance of goods.[7]

The indigenous societies of Melanesia were typically characterized by a "big man" political system in which individuals gained prestige through gift exchanges. The more wealth a man could distribute, the more people in his debt, and the greater his renown. Those who were unable to reciprocate were identified as "rubbish men". Faced, through colonialism, with foreigners with a seemingly unending supply of goods for exchange, indigenous Melanesians experienced "value dominance". That is, they were dominated by others in terms of their own (not the foreign) value system; exchange with foreigners left them feeling like rubbish men.[8]

Since the modern manufacturing process is unknown to them, members, leaders, and prophets of the cults maintain that the manufactured goods of the non-native culture have been created by spiritual means, such as through their deities and ancestors. These goods are intended for the local indigenous people, but the foreigners have unfairly gained control of these objects through malice or mistake.[9] Thus, a characteristic feature of cargo cults is the belief that spiritual agents will, at some future time, give much valuable cargo and desirable manufactured products to the cult members.[9]

Symbols associated with Christianity and modern Western society tend to be incorporated into their rituals; for example the use of cross-shaped grave markers. Notable examples of cargo cult activity include the setting up of mock airstrips, airports, offices, and dining rooms, as well as the fetishization and attempted construction of Western goods, such as radios made of coconuts and straw. Believers may stage "drills" and "marches" with sticks for rifles and use military-style insignia and national insignia painted on their bodies to make them look like soldiers, thereby treating the activities of Western military personnel as rituals to be performed for the purpose of attracting the cargo.[10]

The term cargo cult was first used in print in 1945 by Norris Mervyn Bird, repeating a derogatory description used by planters and businessmen in the Australian protectorate of Papua. The term was later adopted by anthropologists, and applied retroactively to movements in a much earlier era.[11]

Discussions of cargo cults usually begin with a series of movements that occurred in the late nineteenth century and early twentieth century. The earliest recorded cargo cult was the Tuka Movement that began in Fiji in 1885 at the height of British colonial plantation era. Tuka was a leader who witnessed a loss of ancestral efficacy in his social group, a loss of land, and a loss of everything meaningful to his people.[citation needed] The movement began with a promised return to a golden age of ancestral potency. Minor alterations to priestly practices were undertaken to update them and attempt to recover some kind of ancestral efficacy. Colonial authorities saw Tuka as a rebel, and he was exiled, although he kept returning.[12]

The most widely known period of cargo cult activity occurred among the Melanesian islanders in the years during and after World War II. A small population of indigenous peoples observed, often right in front of their dwellings, the largest war ever fought by technologically advanced nations. The Japanese arrived first with a great deal of supplies. Later the Allied forces followed suit.

The vast amounts of military equipment and supplies that both sides airdropped (or airlifted to airstrips) to troops on these islands meant drastic changes to the lifestyle of the islanders, many of whom had never seen outsiders before. Manufactured clothing, medicine, canned food, tents, weapons and other goods arrived in vast quantities for the soldiers, who often shared some of it with the islanders who were their guides and hosts. This was true of the Japanese Army as well, at least initially before relations deteriorated in most regions.

The John Frum cult, one of the most widely reported and longest-lived, formed on the island of Tanna, Vanuatu. This cult started before the war, and only became a cargo cult afterwards. Cult members worship certain "Americans" (such as John Frum and Tom Navy), who they claimed had brought cargo to their island during World War II, as the spiritual entity who would provide the cargo to them in the future.[13]

With the end of the war, the military abandoned the airbases and stopped dropping cargo. In response, charismatic individuals developed cults among remote Melanesian populations that promised to bestow on their followers deliveries of food, arms, Jeeps, etc. The cult leaders explained that the cargo would be gifts from their own ancestors, or other sources, as had occurred with the outsider armies. In attempts to get cargo to fall by parachute or land in planes or ships again, islanders imitated the same practices they had seen the soldiers, sailors, and airmen use. Cult behaviors usually involved mimicking the day-to-day activities and dress styles of US soldiers, such as performing parade ground drills with wooden or salvaged rifles.[14] The islanders carved headphones from wood and wore them while sitting in fabricated control towers. They waved the landing signals while standing on the runways. They lit signal fires and torches to light up runways and lighthouses.[citation needed]

In a form of sympathetic magic, many built life-size replicas of airplanes out of straw and cut new military-style landing strips out of the jungle, hoping to attract more airplanes. The cult members thought that the foreigners had some special connection to the deities and ancestors of the natives, who were the only beings powerful enough to produce such riches.

Cargo cults were typically created by individual leaders, or big men in the Melanesian culture, and it is not at all clear if these leaders were sincere, or were simply running scams on gullible populations. The leaders typically held cult rituals well away from established towns and colonial authorities, thus making reliable information about these practices very difficult to acquire.

Over the last sixty-five years, most cargo cults have disappeared. However, some cargo cults are still active including:

Peter Worsley's analysis of Cargo cults placed the emphasis on the economic and political causes of these popular movements. He viewed them as "proto-national" movements by indigenous peoples seeking to resist colonial interventions. He observed a general trend away from millenarianism towards secular political organization through political parties and cooperatives.[17]

Theodore Schwartz was the first to emphasize that both Melanesians and Europeans place great value on the demonstration of wealth. "The two cultures met on the common ground of materialistic competitive striving for prestige through entrepreneurial achievement of wealth."[8] Melanesians felt "relative deprivation" in their standard of living, and thus came to focus on cargo as an essential expression of their personhood and agency.

Peter Lawrence was able to add greater historical depth to the study of cargo cults, and observed the striking continuity in the indigenous value systems from pre-cult times to the time of his study. Kenelm Burridge, in contrast, placed more emphasis on cultural change, and on the use of memories of myths to comprehend new realities, including the "secret" of European material possessions. His emphasis on cultural change follows from Worsley's argument on the effects of capitalism; Burridge points out these movements were more common in coastal areas which faced greater intrusions from European colonizers.[18]

Cargoism: The discourse on cargo cults

More recent work has debated the suitability of the term cargo cult arguing that it does not refer to an identifiable empirical reality, and that the emphasis on "cargo" says more about Western ideological bias than it does about the movements concerned.[19]

Nancy McDowell argues that the focus on cargo cult isolates the phenomena from the wider social and cultural field (such as politics and economics) that gives it meaning. She states that people experience change as dramatic and complete, rather than as gradual and evolutionary. This sense of a dramatic break is expressed through cargo cult ideology.[11]

Lamont Lindstrom takes this analysis one step farther through his examination of "cargoism", the discourse of the west about cargo cults. His analysis is concerned with our western fascination with the phenomenon in both academic and popular writing. A serious problem with the name is its pejorative connotation of backwardness, since it imputes a goal (cargo) obtained through the wrong means (cult); the actual goal is not so much obtaining material goods as creating and renewing social relationships under threat. Martha Kaplan thus argues we should erase the term altogether.[20]

Metaphorical uses of the term

The term "cargo cult" has been used metaphorically to describe an attempt to recreate successful outcomes by replicating circumstances associated with those outcomes, although those circumstances are either unrelated to the causes of outcomes or insufficient to produce them by themselves. In the former case, this is an instance of the post hoc ergo propter hoc fallacy.

The metaphorical use of "cargo cult" was popularized by physicist Richard Feynman at a 1974 Caltech commencement speech, which later became a chapter in his book Surely You're Joking, Mr. Feynman!, where he coined the phrase "cargo cult science" to describe activity that had some of the trappings of real science (such as publication in scientific journals) but lacked a basis in honest experimentation.

Later the term cargo cult programming developed to describe computer software containing elements that are included because of successful utilization elsewhere, unnecessary for the task at hand.[21]

Novelist Chinua Achebe in his 1984 book The Trouble with Nigeria criticized what he called the "cargo cult mentality" of the rulers of many developing countries who issued lofty proclamations about the future of their countries but fail to exert the necessary effort to bring about those improvements.[22]

Economist Bryan Caplan has referred to Communism as "the largest cargo cult the world has ever seen", describing the economic strategy of the 20th-century Communist leaders as "mimicking a few random characteristics of advanced economies", such as the production of steel.[23]

American rock critic Robert Duncan used cargo cults as an organizing metaphor for the social dislocations in 1960–1970s America in his 1984 book, The Noise.[24]