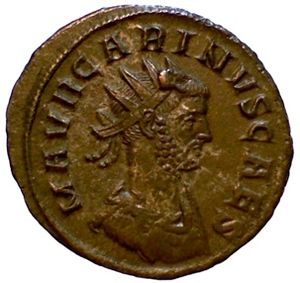 Carinus (Latin: Marcus Aurelius Carinus Augustus;[1] died 285) was Roman Emperor from 282 to 285. The elder son of emperor Carus, he was first appointed Caesar and in the beginning of 283 co-emperor of the western portion of the empire by his father. Official accounts of his character and career have been filtered through the propaganda of his successful opponent, Diocletian.

He fought with success against the Germanic Quadi tribes,[2] but soon left the defence of the Upper Rhine to his legates and returned to Rome, where the surviving accounts, which demonize him, assert that he abandoned himself to all kinds of debauchery and excess. More certainly, he celebrated the annual ludi Romani on a scale of unexampled magnificence.[3][4]

After the death of Carus, the army in the east demanded to return to Europe, and Numerian, the younger son of Carus, was forced to comply.[5] During a halt at Chalcedon, Numerian was found dead. Diocletian, commander of the body-guards, claimed that Numerian had been assassinated, and he was proclaimed emperor by the soldiers.[6][4]

Carinus left Rome at once and set out for the east to meet Diocletian. On his way through Pannonia he put down the usurper Sabinus Iulianus and in July 285 he encountered the army of Diocletian at the Margus River in Moesia.[2][4]

Historians differ on what then ensued. At the Battle of the Margus River (Morava), according to one account, the valour of his troops had gained the day, but Carinus was assassinated by a tribune whose wife he had seduced.[2] Another account represents the battle as resulting in a complete victory for Diocletian, and Carinus' army deserted him. This account may be confirmed by the fact that Diocletian kept in service Carinus' Praetorian Guard commander, Titus Claudius Aurelius Aristobulus.[2][4]

Carinus has a reputation as one of the worst Roman emperors. This infamy may have been supported by Diocletian himself. For example, the (unreliable) Historia Augusta has Carinus marrying nine wives, while neglecting to mention his only real wife, Magnia Urbica, by whom he had a son, Marcus Aurelius Nigrinianus.

After his death, Carinus' memory was officially condemned in the Roman proceeding known as Damnatio Memoriae. His name, along with that of his wife, was erased from inscriptions.[7]