Carisbrooke Castle is a historic motte-and-bailey castle located in the village of Carisbrooke, near Newport, Isle of Wight, England. Charles I was imprisoned at the castle in the months prior to his trial.[1]

The site of Carisbrooke Castle may have been occupied in pre-Roman times. A ruined wall suggests that there was a building there in late Roman times. The Anglo-Saxon Chronicle mentions that Wihtgar, cousin of King Cynric of Wessex, died in AD 544, and was buried there. The Jutes may have taken over the fort by the late 7th century. An Anglo-Saxon stronghold occupied the site during the 8th century. Around 1000, a wall was built around the hill as a defence against Viking raids. 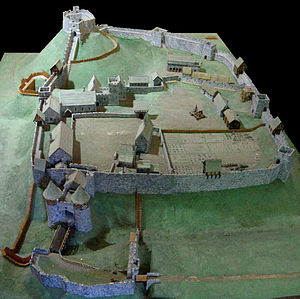 A reconstruction of Carisbrooke Castle during the 14th century

From 1100 the castle remained in the possession of Richard de Redvers' family, and over the next two centuries his descendants improved the castle with stone walls, towers and a keep. In 1293, Countess Isabella de Fortibus, the last Redvers resident, sold the castle to Edward I. From then on, its governance was entrusted to wardens as representatives of the crown.[2]

In 1377, in the reign of Richard II the castle was unsuccessfully attacked by the French. It was reputedly saved by local hero Peter de Heyno who shot the French commander. Anthony Woodville, Lord Scales, later Earl Rivers, obtained a grant of the castle and rights of Lordship in 1467. He was responsible for the addition of the Woodville Gate, now known as the Entrance Gate.[3] Woodville was killed by Richard III in 1483, but his brother Edward Woodville was given control of the castle on the accession of Henry VII in 1485.[4]

The keep was added to the castle in the reign of Henry I, and in the reign of Elizabeth I, when the Spanish Armada was expected, it was surrounded by additional fortifications by Sir George Carey, who had been appointed Governor of the Isle of Wight in 1583. Carey later commissioned the Italian engineer Federigo Giambelli (or Genebelli) to make more substantial improvements to the defences. Starting in 1597, Giambelli constructed a modern trace Italienne fortification, a squat rampart and ditch supported at intervals by powerful bastions, which completely surrounded the old castle and bailey. The new fortification was mostly completed by 1600 at the cost of £4,000.[5]

Charles I was imprisoned here for fourteen months before his execution in 1649.[1] Afterwards his two youngest children were confined in the castle, and Princess Elizabeth died there. From 1896–1944, it was the home of Princess Beatrice, daughter of Queen Victoria, as Governor of the Isle of Wight.[6] It is now under the control of English Heritage.[7]

The castle is located above, and to the south of, Carisbrooke village centre.

In 2007, English Heritage opened a holiday flat inside the castle, in converted former staff quarters. The flat is above the museum near the room in which the king was kept captive. A balcony going across the King's prison room adjoins the flat, which is currently rented on a long lease to English Heritage staff.[8] According to the Association of Leading Visitor Attractions, nearly 120,000 people visited Carisbrooke Castle in 2010.[9] 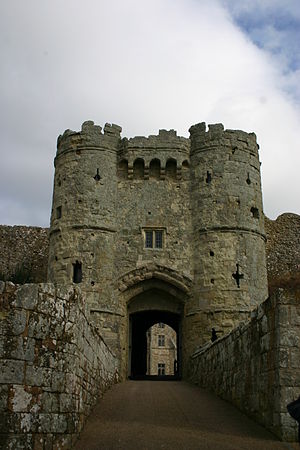 Carisbrooke was the strongest castle on the Island; though it is visible from some distance, it does not dominate the countryside like many other castles.

There are traces of a Roman fort underneath the later buildings. Seventy-one steps lead up to the keep; the reward is a fine view. In the centre of the castle enclosure are the domestic buildings; these are mostly of the 13th century, with upper parts of the 16th century. Some are in ruins, but the main rooms were used as the official residence of the Governor of the Isle of Wight until the 1940s, and they remain in good repair.

The Great Hall, Great Chamber and several smaller rooms are open to the public, and an upper room houses the Isle of Wight Museum. Most rooms are partly furnished.

One of the main subjects of the museum is King Charles I. He tried to escape from the castle in 1648, but was unable to get through the bars of his window.

The name of the castle is echoed in a very different structure on the other side of the world. A visit to the castle by James Macandrew, one of the founders of the New Zealand city of Dunedin, led to him naming his estate "Carisbrook". The name of the estate was later used for Dunedin's main sporting venue.

The gateway tower was erected by Lord Scales who was lord of the castle at the time in 1464.[3]

The chapel is located next to the main gate. In 1904 the chapel of St Nicholas in the castle was reopened and re-consecrated, having been rebuilt as a national memorial of Charles I. Within the walls is a well 200 feet deep and another in the centre of the keep is reputed to have been still deeper.

Near the domestic buildings is the well-house with its working donkey wheel. As it is still operated by donkeys, the wheel is a great attraction and creates long queues. The well is also famous as the hiding place of the Mohune diamond, in the 1898 adventure novel Moonfleet, by J. Meade Falkner. Wyndham Lewis, who lived on the Isle of Wight as a child, cites the donkey wheel at Carisbrooke as an image for the way machines impose a way of life on human beings ('Inferior Religions', published 1917).

Surrounding the whole castle are large earthworks, designed by the Italian Federigo Gianibelli, and begun in the year before the Spanish Armada. They were finished in the 1590s. The outer gate has the date 1598 and the arms of Elizabeth I. 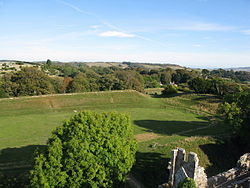 The bowling green used by Charles I during his imprisonment