The Carl Gustaf (Swedish pronunciation: [ˈkʰɑːɭ ˈɡɵ̞stɑːv]; also known as, Gustaf Bazooka and M2CG) is an 84 mm man-portable reusable anti-tank recoilless rifle produced by Saab Bofors Dynamics (formerly Bofors Anti-Armour AB) in Sweden. The first prototype of the Carl Gustaf was produced in 1946, and while similar weapons of the era have generally disappeared, the Carl Gustaf remains in widespread use today.[citation needed] It is also recognized as being a "rocket launcher", not just a recoilless rifle, in that it is capable of firing the HEAT RAP FFV 551 (High Explosive Anti Tank Rocket Assisted Projectile) finned round. Simply put, depending on the round (shell) utilized, the explosive energy propelling the projectile may, or may not, occur during mid flight of said projectile. Hence, the Carl Gustaf may or may not be referred to as a "rocket launcher" or "recoilless rifle", both equally correct.

In its country of origin it is officially named Grg m/48 (Granatgevär or grenade rifle, model 48). British troops refer to it as the Charlie G, while Canadian troops often refer to it as the 84 or Carl G. In U.S. military service it is known as the M3 Multi-Role Anti-Armor Anti-Personnel Weapon System (MAAWS) or Ranger Anti-tank Weapons System (RAWS), but is often called the Gustaf or the Goose or simply the Carl Johnson by American servicemembers. In Australia it is irreverently known as Charlie Gusto or Charlie Gutsache (guts ache, slang for stomach pain).[citation needed]

The Carl Gustaf was developed by Hugo Abramson and Harald Jentzen at the Kungliga Arméförvaltningens Tygavdelning (Royal Swedish Arms Administration) and produced at Carl Gustaf Stads Gevärsfaktori from where it derives its name. The weapon was first introduced into Swedish service in 1948 as the 8,4 cm Granatgevär m/48 (Grg m/48), filling the same anti-tank role as the U.S. Army's Bazooka, British PIAT and German Panzerschreck. Unlike these weapons, however, the Carl Gustaf used a rifled barrel for spin-stabilizing its rounds, as opposed to fins used by the other systems.

The use of the recoilless firing system allowed the Carl Gustaf to use ammunition containing considerably more propellant, firing its rounds at 290 m/s, as opposed to about 105 m/s for the Panzerschreck and Bazooka and about 75 m/s for the PIAT. The result was superior accuracy at longer ranges. The Carl Gustaf can be used to attack larger stationary targets at up to 700 m, but the relatively low speed of the projectile restricts attacks on moving targets to a range of 400 m or less.[citation needed]

The Carl Gustaf was soon sold around the world and became one of the primary squad-level anti-tank weapons for many West European armies. An improved version (M2) was introduced in 1964 and quickly replaced the original version. The current M3 version was introduced in 1991, using a thin steel liner containing the rifling, strengthened by a carbon fiber outer sleeve. External steel parts were replaced with aluminium alloys or plastics, reducing the empty weapon weight considerably—from 16.35 kg to 10 kg.[citation needed]

In recent years, the weapon has found new life in a variety of roles. The British Special Air Service, United States Army Special Forces and United States Army Rangers use M3s in bunker-busting and anti-vehicle roles, while the German Bundeswehr maintains a small number of M2s for battlefield illumination. Many armies continue to use it as a viable anti-armor weapon, especially against 1950s- and '60s-era tanks and other armored vehicles still in use worldwide.[citation needed]

In a well-documented incident during the Falklands War, a Royal Marine attacked an Argentinian corvette (ARA Guerrico) using a Carl Gustaf.[5]

The Carl Gustaf was used against Taliban defensive fortifications by soldiers of Princess Patricia's Canadian Light Infantry in operations in Afghanistan. They developed a new system for firing at night in which a spotter with a night-scope fires tracer ammunition to mark the target for the Carl Gustaf gunner.[citation needed]

Carl Gustaf launchers were used by Free Libyan Army during the Libyan Civil War in 2011; the weapons being used were either captured or provided by defecting members of the Libyan Army.[citation needed]

In November 2011, the U.S. Army began ordering the M3 MAAWS for regular units deployed in Afghanistan. Soldiers were being engaged with RPGs at 900 meters, while their light weapons had effective ranges of 500–600 meters. The Carl Gustaf allows airburst capability of troops in defilade out to 1,250 meters, and high explosive use out to 1,300 meters. While the weapon provides enhanced effectiveness, its 9.5 kg weight burdens troops. On 28 March 2013, USSOCOM announced a call for sources to develop a kit to lighten the M3 MAAWS by 1.3–2.2 kg, plus a 7.5 cm reduction in overall length, without affecting the weapon's center of gravity or ruggedness, including air delivery and salt water submersion. A kit with production configuration is to be delivered within 16 months. Saab has developed a weight-reduced version prior to the SOCOM release weighing approximately 11 kg and is 5 cm shorter. Live fire tests have demonstrated no decrease in performance, no increase in recoil, and nearly equivalent barrel life. It was to be ready for government testing in 2014. Saab has also developed a new high explosive round that has a direct fire range of 1,500 meters when using a fire control system.[6]

At AUSA 2014, Saab Dynamics displayed its new Carl Gustaf M4 variant. Compared to the M3 MAAWS, the M4 is 3.4 kg (7.5 lb) lighter weighing 6.6 kg (15 lb) and shorter with a 950 mm (37 in) overall length. The shorter length was in response to the need to wield the weapon in urban terrain, and weight savings were achieved through using lighter components whenever possible including a carbon fiber tube with titanium liner, as well as a new venturi design. Other new features include a red-dot sight, a travel safety catch to allow the M4 to be carried while loaded, an adjustable shoulder rest and forward grip for improved ergonomics, a shot counter to keep track of how many rounds have been fired to manage the weapon's 1,000-round barrel life, picatinny rails for grips and sight mounts, and a remote round management function so intelligent sights can "talk" to programmable rounds. Sources claim the M4 can meet the needs of USSOCOM for a shorter and lighter recoilless rifle and note that they are considering acquiring it under the designation of M3A1.[7][8] The Defense Department has agreed to evaluate the shorter and lighter M4 version over the next two years.[9] 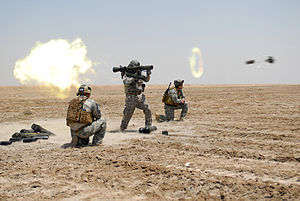 In May 2009, U.S. Army Special Forces soldiers train with the Carl Gustaf recoilless rifle in Basra, Iraq, during the Iraq War. Note the firing position and recoilless backblast.

The basic weapon consists of the main tube with the breech-mounted Venturi recoil damper, with two grips near the front and a shoulder mount. The weapon is fitted with iron sights, but is normally aimed with the attached 3× optical sight with a 17 degree (300 mrad) field of view. The most modern variants fielded to Swedish rifle companies have been fitted with the Swedish Aimpoint sighting system. Luminous front and rear sight inserts are available for the iron sights when aiming at night, and an image intensification system may also be used.

The Carl Gustaf can be fired from the standing, kneeling, sitting or prone positions, and a bipod may be attached in front of the shoulder piece. An operating handle called the "Venturi lock" is used to move the hinged breech to one side for reloading. The weapon is normally operated by a two-man crew, one carrying and firing the weapon, the other carrying ammunition and reloading.

In the late 1980s, the Special Operations Forces Modernization Action Plan indicated need for a Ranger Anti-Armor/Anti-Personnel Weapon System (RAAWS) to replace the M67 recoilless rifle in use by the 75th Ranger Regiment. A market survey in 1987 indicated that the Carl Gustaf M3 was the best candidate for satisfying RAAWS requirements. On 29 September 1988, the M3 was selected as the RAAWS from candidate proposals submitted in response to the market survey compiled by ARDEC. A subsequent review of the contractor-supplied fatigue test data determined that the data did not meet U.S. Army requirements. Benét Laboratories conducted fatigue test of 2 tubes to establish an interim safe service life for the weapon. Tests were conducted in 1993. The manufacturer’s recommended life for the weapon was 500 rounds, but bore surfaces showed no indications of erosion until 2,360 rounds. The U.S. Navy SEALs became interested in the program and moved it to a Joint Integrated Product Team. The program name subsequently changed from the RAAWS to the Multi-Role Anti-Armor Anti-Personnel Weapon System (MAAWS).[11]

Army Rangers found the M3 Carl Gustaf was best employed using a two-man team. One person would carry the launcher and be armed with a pistol for personal protection, and the other would carry 5–6 rounds of ammunition and act as a spotter for the gunner. Although the single-shot AT-4 is lighter and can be carried by one person, a Gustaf team with the heavier recoilless rifle can reload and fire more rounds.[12]

In late 2012, the Army fielded 58 M3s and 1,500 rounds of ammunition to units deployed to Afghanistan to destroy enemy targets out to 1,000 meters. This was because RPG and machine gun teams could attack 900 meters away, while existing weaponry like the M141 Bunker Defeat Munition, M72 LAW, M136 AT-4 and MK153 SMAW had effective ranges of only 500 meters. The AT-4 is lighter and cheaper but is made of reinforced fiberglass, while the M3's rifled metal/carbon fiber launch tube allows for reloading. Employing the 22 lb M3 is easier than the 50 lb FGM-148 Javelin with its launcher with missile and reusable command launch unit, is faster than waiting on mortars, and is cheaper than the Javelin and artillery shells for engaging targets in hard cover.[11] 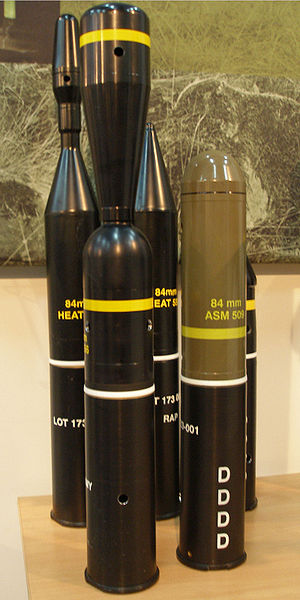 Carl Gustaf recoilless rifle round ammunition on display in 2007.

Improvements to the ammunition have been continual. While the older HEAT rounds are not particularly effective against modern tank armor, the weapon has found new life as a bunker-buster with an HEDP round. In addition, improved HEAT, high explosive (HE), smoke and illumination (star shell or flare) ammunition is also available. For full effectiveness, illumination rounds have to be fired at a very high angle, creating a danger for the gunner as the backblast from firing can burn him. For this reason, several armies have retired the illumination rounds, while the U.S. Army requires that they be fired from a standing position.

Note that the following are Canadian designations (other countries use similar terminology, replacing the "FFV") 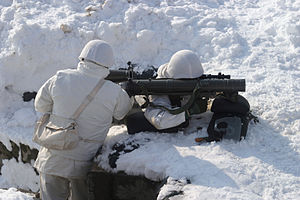 JGSDF soldiers operating the Howa 84RR IN February 2004. The Howa 84RR is a Japanese-made version of the Carl Gustaf. 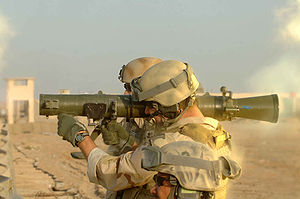