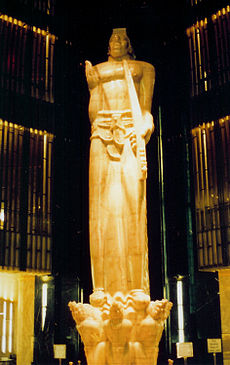 Carl Milles (23 June 1875 – 19 September 1955) was a Swedish sculptor. He was married to artist Olga Milles and brother to Ruth Milles and half brother to the architect Evert Milles. Carl Milles sculpted the Poseidon statue in Gothenburg, the Gustaf Vasa statue at the Nordic Museum, the Orpheus group outside the Stockholm Concert Hall and the Folke Filbyter sculpture in Linköping. The latter was featured on a stamp issued in 1975 commemorating the centenary of his birth. Millesgården became his last home and is now a museum. 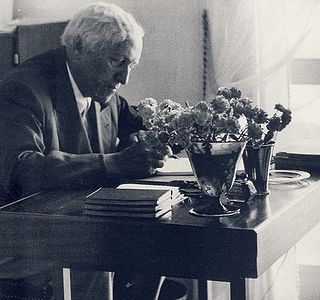 Carl Milles by his desk in the Millesgården in Sweden 1955

Milles was born Carl Wilhelm Andersson, son of lieutenant Emil "Mille" Andersson and his wife Walborg Tisell, (June 23, 1875 – September 19, 1955) at Lagga outside Uppsala in 1875. In 1897 he made what he thought would be a temporary stop in Paris on his way to Chile, where he was due to manage a school of gymnastics. However, he remained in Paris, where he studied art, working in Auguste Rodin's studio and slowly gaining recognition as a sculptor. In 1904 he and Olga moved to Munich.

Two years later they settled in Sweden, buying property on Herserud Cliff on Lidingö, a large island near Stockholm. Millesgarden was built there between 1906 and 1908 as the sculptor's private residence and workspace. It was turned into a foundation and donated to the Swedish people in 1936, five years after Milles had sailed for America and the Cranbrook Academy of Art in Bloomfield Hills. 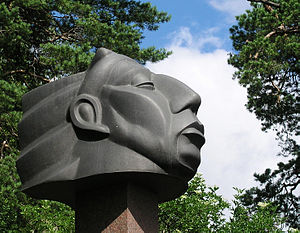 In 1931, American publisher George Gough Booth brought Milles to Cranbrook Educational Community, in Bloomfield Hills, Michigan, to serve as his sculptor in residence.[1] Part of Booth's arrangement with his principal artists was that they were expected to create major commissions outside the Cranbrook environment.[2]

In 1938, for the 300th anniversary of the founding of New Sweden, the country commissioned a sculpture by Milles featuring a replica of the Kalmar Nyckel, the ship which originally brought the Swedish colonists to America. The sculpture is located at Fort Christina in Wilmington, Delaware near the landing site where the colonists arrived in 1638.

In America he is best known for his fountains. Milles' fountain group The Wedding of the Waters in St. Louis symbolizes the Missouri and Mississippi Rivers merging just upstream. Commissioned in 1936 and unveiled in May 1940 to a crowd of about 3000 people, the fountain caused a local uproar because of its playful, irreverent, naked, and nearly cartoonish figures, and because Milles had conceived the group as a wedding party. Local officials insisted that the name be changed to The Meeting of the Waters.

Outside the Detroit's Frank Murphy Hall of Justice is a Carl Milles statue, The Hand of God, which was sculpted in honor of Frank Murphy, Detroit Mayor, Michigan Governor and United States Supreme Court Associate Justice. The statue was placed on a pedestal with the help of sculptor Marshall Fredericks. The statue was commissioned by the United Automobile Workers,[3] and paid for by individual donations from UAW members.[4] The annual Global Award for Entrepreneurship Research is an award for research on entrepreneurship. It consists of a statuette replica of The Hand of God and a prize sum of 100,000 euros.

Milles' sculptures sometimes offended American sensibilities, and he had a 'fig leaf' maker on retainer.[1]

Photographs of his sculptures, taken for a monograph on Milles, are now held in the Carl Milles Photograph Collection, c. 1938–1939, in the Ryerson & Burnham Libraries at the Art Institute of Chicago.

Milles and his wife returned to Sweden in 1951, and lived in Millesgården every summer until Milles's death in 1955. They spent winters in Rome, where the American Academy had supplied them with a studio. Milles and his wife, Olga, who died in 1967 in Graz, Austria, are buried in a small stone chapel, designed by Milles, at Millesgården. Because Swedish law requires burial on sacred ground, it took the assistance of the then reigning Gustaf VI Adolf to allow this resting place. 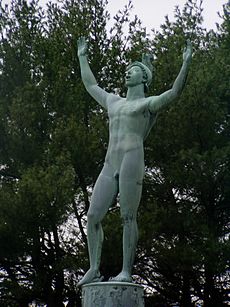 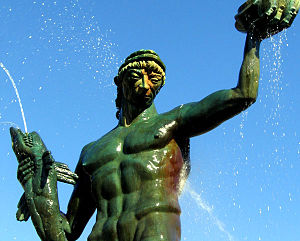