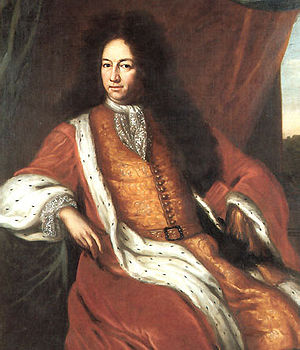 Carl, Count (or Greve) Piper (July 29, 1647, Stockholm – May 29, 1716, Schlüsselburg) was a Swedish statesman. He entered the foreign office after completing his academical course at Uppsala, accompanied Benedict Oxenstjerna on his embassage to Russia in 1673, and attracted the attention of Charles XI during the Scanian War by his extraordinary energy and ability.

In 1679, he was appointed secretary to the board of trade and ennobled. In 1689, he was made one of the secretaries of state, and Charles XI recommended him on his deathbed to his son and successor, Charles XII. Piper became the most confidential of the new sovereign's ministers. In 1697 he was made a senator and set over domestic affairs while still retaining his state-secretaryship. [1]

In 1698, he was created a count, in 1702 appointed chancellor of Uppsala University, and during the first half of the Great Northern War, as the chief of Charles' perambulating chancellery, he was practically prime minister. It was his misfortune, however, to be obliged to support a system which was not his own. [1]

He belonged to the school of Benedict Oxenstjerna and was therefore an avowed advocate of a pacific policy. He protested in vain against nearly all the military ventures of Charles XII, e.g. the War of Deposition against Augustus of Saxony and Poland, the invasion of Saxony, the raid into the Ukraine. Again and again he insisted that the pacific overtures of Peter the Great should at least be fairly considered, but his master was always immovable. Piper's career came to an end at the Battle of Poltava (1709), where he was among the prisoners. The last years of his life were spent in exile in Russia. He died at Schlüsselburg in 1716. [1]

Carl Piper was the son of Carl Piper and Ingrid Charlotta Ekenbom and married to Christina Törne.