From Infogalactic: the planetary knowledge core
Jump to: navigation, search
This article is about the writer. For the passenger train service, see Carl Sandburg (train).

Carl Sandburg (January 6, 1878 – July 22, 1967) was an American poet, writer, and editor who won three Pulitzer Prizes, two for his poetry and one for his biography of Abraham Lincoln.[2] During his lifetime, Sandburg was widely regarded as "a major figure in contemporary literature", especially for volumes of his collected verse, including Chicago Poems (1916), Cornhuskers (1918), and Smoke and Steel (1920).[3] He enjoyed "unrivaled appeal as a poet in his day, perhaps because the breadth of his experiences connected him with so many strands of American life",[4] and at his death in 1967, President Lyndon B. Johnson observed that "Carl Sandburg was more than the voice of America, more than the poet of its strength and genius. He was America."[5]

Carl Sandburg was born in a three-room cottage at 313 East Third Street in Galesburg, Illinois, to Clara Mathilda (née Anderson) and August Sandberg,[1] both of Swedish ancestry.[6] He adopted the nickname "Charles" or "Charlie" in elementary school at about the same time he and his two oldest siblings changed the spelling of their last name to "Sandburg".[1][7][8]

At the age of thirteen he left school and began driving a milk wagon. From the age of about fourteen until he was seventeen or eighteen, he worked as a porter at the Union Hotel barbershop in Galesburg.[9] After that he was on the milk route again for eighteen months. He then became a bricklayer and a farm laborer on the wheat plains of Kansas.[10] After an interval spent at Lombard College in Galesburg,[11] he became a hotel servant in Denver, then a coal-heaver in Omaha. He began his writing career as a journalist for the Chicago Daily News. Later he wrote poetry, history, biographies, novels, children's literature, and film reviews. Sandburg also collected and edited books of ballads and folklore. He spent most of his life in the Midwest before moving to North Carolina.

Sandburg volunteered to go to the military and was stationed in Puerto Rico with the 6th Illinois Infantry during the Spanish–American War,[12] disembarking at Guánica, Puerto Rico on July 25, 1898. Sandburg was never actually called to battle. He attended West Point for just two weeks, before failing a mathematics and grammar exam. Sandburg returned to Galesburg and entered Lombard College, but left without a degree in 1903.

He moved to Milwaukee, Wisconsin, and joined the Social Democratic Party, the name by which the Socialist Party of America was known in the state. Sandburg served as a secretary to Emil Seidel, socialist mayor of Milwaukee from 1910 to 1912.[13]

Sandburg met Lilian Steichen at the Social Democratic Party office in 1907, and they married the next year. Lilian's brother was the photographer Edward Steichen. Sandburg with his wife, whom he called Paula, raised three daughters.

The Sandburgs moved to Harbert, Michigan, and then to suburban Chicago, Illinois. They lived in Evanston, Illinois, before settling at 331 S. York Street in Elmhurst, Illinois, from 1919 to 1930. Sandburg wrote three children's books in Elmhurst, Rootabaga Stories, in 1922, followed by Rootabaga Pigeons (1923), and Potato Face (1930). Sandburg also wrote Abraham Lincoln: The Prairie Years, a two-volume biography, in 1926, The American Songbag (1927), and a book of poems called Good Morning, America (1928) in Elmhurst. The family moved to Michigan in 1930. The Sandburg house at 331 W. York Street, Elmhurst was demolished and the site is now a parking lot.

In 1919 Sandburg won a Pulitzer Prize "made possible by a special grant from The Poetry Society" for his collection Corn Huskers.[14] He won the 1940 Pulitzer Prize for History for The War Years, the second volume of his Abraham Lincoln, and a second Poetry Pulitzer in 1951 for Complete Poems.[2][14]

In 1945 he moved to Connemara, a 246-acre (100 ha) rural estate in Flat Rock, North Carolina. Here he produced a little over a third of his total published work,[citation needed] and lived with his wife, daughters, and two grandchildren.

On February 12, 1959, in commemorations of the 150th anniversary of Abraham Lincoln's birth, Congress met in joint session to hear actor Fredric March give a dramatic reading of the Gettysburg Address, followed by an address by Sandburg.[15] As of 2013[update], Sandburg remains the only American poet ever invited to address a joint session of Congress.[16]

Sandburg supported the Civil Rights Movement and was the first white man to be honored by the NAACP with their Silver Plaque Award as a "major prophet of civil rights in our time."[17] 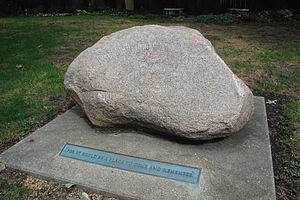 Sandburg died of natural causes in 1967; his ashes were interred under "Remembrance Rock", a granite boulder located behind his birth house.[18][19] 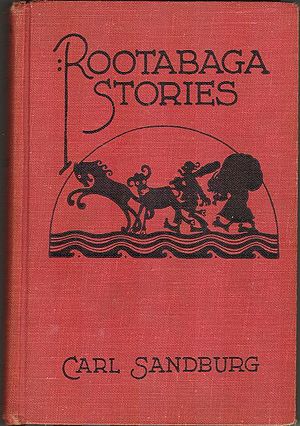 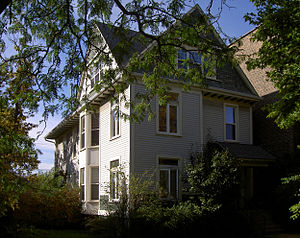 Carl Sandburg rented a room in this house where he lived for three years while he wrote the poem "Chicago". It is now a Chicago landmark.[20]

Much of Carl Sandburg's poetry, such as "Chicago", focused on Chicago, Illinois, where he spent time as a reporter for the Chicago Daily News and the Day Book. His most famous description of the city is as "Hog Butcher for the World/Tool Maker, Stacker of Wheat/Player with Railroads and the Nation's Freight Handler,/Stormy, Husky, Brawling, City of the Big Shoulders."

Sandburg earned Pulitzer Prizes for his collection The Complete Poems of Carl Sandburg, Corn Huskers, and for his biography of Abraham Lincoln (Abraham Lincoln: The War Years).[2] He recorded excerpts from the biography and some of Lincoln's speeches for Caedmon Records in New York City in May 1957. He was awarded a Grammy Award in 1959 for Best Performance – Documentary Or Spoken Word (Other Than Comedy) for his recording of Aaron Copland's Lincoln Portrait with the New York Philharmonic.

Sandburg is also remembered by generations of children for his Rootabaga Stories and Rootabaga Pigeons, a series of whimsical, sometimes melancholy stories he originally created for his own daughters. The Rootabaga Stories were born of Sandburg's desire for "American fairy tales" to match American childhood. He felt that the European stories involving royalty and knights were inappropriate, and so populated his stories with skyscrapers, trains, corn fairies and the "Five Marvelous Pretzels".

Sandburg's 1927 anthology, the American Songbag, enjoyed enormous popularity, going through many editions; and Sandburg himself was perhaps the first American urban folk singer, accompanying himself on solo guitar at lectures and poetry recitals, and in recordings, long before the first or the second folk revival movements (of the 1940s and 1960s, respectively).[21] According to the musicologist Judith Tick:

As a populist poet, Sandburg bestowed a powerful dignity on what the '20s called the "American scene" in a book he called a "ragbag of stripes and streaks of color from nearly all ends of the earth ... rich with the diversity of the United States." Reviewed widely in journals ranging from the New Masses to Modern Music, the American Songbag influenced a number of musicians. Pete Seeger, who calls it a "landmark", saw it "almost as soon as it came out." The composer Elie Siegmeister took it to Paris with him in 1927, and he and his wife Hannah "were always singing these songs. That was home. That was where we belonged."[22]

In 1960, Elmhurst, Illinois renamed the former Elmhurst Junior High School as "Carl Sandburg Middle School." Sandburg spoke at the dedication ceremony. He resided at 331 S. York Street in Elmhurst from 1919 to 1930. The house was demolished and the site is a parking lot.[24] In 1954, Carl Sandburg High School was dedicated in Orland Park, Illinois. Sandburg was in attendance, and stretched what was supposed to be a one-hour event into several hours, regaling students with songs and stories. Years later, he returned to the school with no identification and, appearing to be a hobo, was thrown out by the principal. When he later returned with I.D., the embarrassed principal canceled the rest of the school day and held an assembly to honor the visit.[citation needed] In 1959, Carl Sandburg Junior High School was opened in Golden Valley, Minnesota. Carl Sandburg attended the dedication of the school. In 1988 the name was changed to Sandburg Middle School servicing grades 6, 7, and 8. The school was built with a capacity for 1,800 students. Sandburg Middle school was one of the first schools in the state of Minnesota to offer accelerated learning programs for gifted students. The middle school closed in 2010 and now operates as the Sandburg Learning Center, specializing in adult education. In December 1961, Carl Sandburg Elementary School was dedicated in San Bruno, California. Again, Sandburg came for the ceremonies and was clearly impressed with the faces of the young children, who gathered around him.[25] The school was closed in the 1980s, due to falling enrollments in the San Bruno Park School District. Also, Carl Sandburg Grade school, constructed in 1960's Charleston Illinois, shares in the legacy of Mr. Sandburg.

In Neshaminy School District of lower Bucks County resides the secondary institution Carl Sandburg Middle School. Located in the lobby is a finished split tree trunk with the quote engraved lengthwise horizontally: "Man is born with rainbows in his heart and you'll never read him unless you consider rainbows". Another secondary school by the same name is located south of Alexandria, Virginia, and is part of the Fairfax County Public Schools School District. Sandburg Halls is a student residence hall at the University of Wisconsin–Milwaukee. The building consists of four high-rise towers with a total housing capacity of 2,700 students. It has an exterior plaque on Sandburg's roles as an organizer for the Social Democratic Party and as personal secretary to Emil Seidel, Milwaukee's first Socialist mayor. There are several other schools named after Sandburg in Illinois, including those in Wheaton, Orland Park, Springfield, Mundelein, Freeport and Joliet. 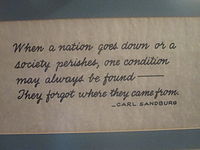 On January 6, 1978, the 100th anniversary of his birth, the United States Postal Service issued a commemorative stamp honoring Sandburg. The spare design consists of a profile originally drawn by his friend William A. Smith in 1952, along with Sandburg's own distinctive autograph.[26]

The Rare Book & Manuscript Library (University of Illinois at Urbana-Champaign) (RBML)[27] houses the Carl Sandburg Papers. The bulk of the collection was purchased directly from Carl Sandburg and his family. In total, the RBML owns over 600 cubic feet of Sandburg's papers, including photographs, correspondence, and manuscripts.[28][29]

Carl Sandburg Library first opened in Livonia, Michigan, on December 10, 1961. The name was recommended by the Library Commission as an example of an American author representing the best of literature of the Midwest. Carl Sandburg had taught at the University of Michigan for a time.[30]