Carleton Place is a town in Eastern Ontario, Canada, in Lanark County, about 46 kilometres (29 mi) west of downtown Ottawa.[2] It is located at the crossroads of Highway 15 and Highway 7, halfway between the towns of Perth, Almonte, Smiths Falls, and the nation's capital, Ottawa. The Mississippi River, a tributary of the Ottawa River flows through the town. Mississippi Lake is just upstream by boat, as well as by car. 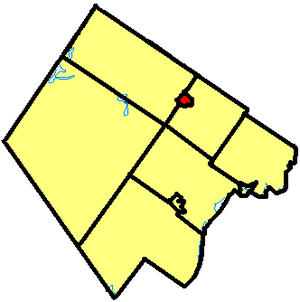 The town is situated on the edge of a large limestone plain, just south of the edge of the Canadian Shield in the deciduous forest ecoregion of North America.[3] Carleton Place was first settled when British authorities prompted immigration to Lanark County in the early 19th century.[4] The Morphy and Moore families were among the first to arrive. Edmond Morphy chose the site in 1819 when he realized there was potential in the area waterfall. He built a mill there and was the first of many such textile and lumber industries to reside in the area. The settlement was then known as Morphy's Falls. In 1829, the area was renamed Carleton Place, after a street in Glasgow, Scotland, when a post office was constructed. It became a village in 1870, and a town in 1890. The community's economic growth was enabled by the construction of the Brockville and Ottawa Railway later in the century. The town was also renowned for its access to Mississippi Lake, and had steamship service to Innisville on the west end of Mississippi Lake between the 1860s and 1920s.[5] The river led to the development of the Ottawa Valley Canoe Association in 1893, which still exists today as the Carleton Place Canoe Club. The town received further recognition when a World War One fighter pilot, and town resident, Captain Arthur Roy Brown, made history by shooting down the Red Baron.

The logging industry stimulated economic development in the 19th century, with white pine logs exported to Europe.[6] Local forests were depleted of hemlock to provide bark for the leather tanning industry.[7] Both textile and lumber mills flourished,[5] but none still operates. "The Findlay Foundry", founded by David Findlay in 1862,[8] operated until 1974, making cast iron cookware and woodstoves. Some of the designs created by this company are still being made by another company. Today, the remaining mill buildings house condominiums and high-tech industry. The "Crash Position Indicator" (CPI) was manufactured and marketed in Carleton Place by Leigh Instruments Ltd.[9] 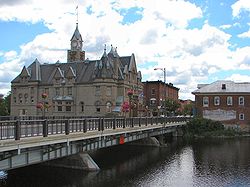 One of the principal attractions of Carleton Place is the Mississippi River, including the rapids through limestone which supports one of the regions largest stands of hackberry trees [1]. Mississippi Lake provides an important source of recreation and economic stimulus from tourism. Other attractions include local parks and walking paths such as the Trans-Canada Trail, the O-Kee-Lee Park Trail, where you might see Canada geese or even a bald eagle fishing, and the Arklan/Stone Water Gate Nature Trail that provides a view of the ruins of the Arklan mills. There is also the Carleton Place Dragon Boat Festival, Carleton Place and Beckwith Heritage Museum, and the Canada Veteran's Hall of Valour. Also located in Carleton Place is The Book Gallery, Ontario's largest used book store. There are several fine restaurants featuring locally grown-food. The Carleton Place Canoe Club was founded in 1893 and it is the oldest canoe club in Canada. It is the towns most successful and longest lasting sports facility, sending dozens of athletes to the Olympics and World Championships. The Bridge Street Bazaar hosted annually by the Carleton Place BIA(Business Improvement Association) is a street fair, which occurs on the Civic Holiday weekend. Each year thousands of people flock to the historic downtown for shopping, entertainment, a fun and exciting kid's zone and local restaurants.

As a result of the population growth in Carleton Place and area, Highway 7 has been expanded from two lanes to four to allow better traffic flow from the Ottawa area during rush hour periods. Construction was completed at the end of 2011.

In addition to the Highway 7 expansion, since 2006, there has been a rapid expansion in the number and variety of retail stores in Carleton Place, mainly concentrated along McNeely Ave between Hwy 7 and Coleman Avenue/Cavanagh Road in three large format big box developments. New additions include a Walmart superstore with an in-store McDonald's, Mark's Work Wearhouse, Hallmark, Bulk Barn, EB Games, Dollarama, Home Depot, A&W, Rona, Taphouse Grill & Bar, Staples, Starbucks, Telus Mobility, Shawarma Place, Subway, LCBO, and Giant Tiger. A Canadian Tire, Your Independent Grocer and a Tim Horton's were built between 2000 and 2006 in the same area at McNeely Avenue and Highway 7. In addition to this retail development, housing projects along Mississippi Road in the south, Quarry Road in the Northwest, and along both sides of McNeely Avenue have become more noticeable in recent years. Several new high-rise condominiums are also under construction: one located along a new main thoroughfare, Coleman Street and another for seniors along McNeely Avenue.

A revitalization of the downtown is a goal of Town staff, the Mayor and Councillors. It has met with limited success to date. Several key historical buildings have seen renovations, most notably the move of Moore House to its new home downtown, across the street from the Town Hall. The sidewalks and facades have also seen work redone, as well as heritage murals, to display former businesses that used to be located in the Town. A parallel access route, Beckwith Street, was repaired in summer 2011 to better help with traffic congestion downtown; Bridge Street saw a similar, much-needed renovation during 2010.

The old Canadian Tire, which was situated at the corner of Beckwith and Lake Ave. East, was demolished in June 2011, along with an old house and commercial building. Most of the land will become a parking lot to not only ease the congestion of the downtown core, but will also provide a permanent location for the local Farmer's Market. The new Market Square Pavilion opens annually in May and operates until October. The Carleton Place Farmer's Market has a wide variety of vendors - farm fresh produce and meats, homemade preserves and baking, as well as handmade crafts and artwork. A small building will also be erected on the old Canadian Tire location and will provide retail and residential opportunities. Another, less-noticed disappearance is that of the trains which, up until recently, traveled along the local route from Smiths Falls to Arnprior. Though track through Carleton Place has not been removed, local advocates work towards maintaining the presence of a local train track, however, rail utility buildings in downtown Carleton Place were recently removed.

Carleton Place is an active participant in the Sister Cities program and has a relationships with the following municipalities: