From Infogalactic: the planetary knowledge core
Jump to: navigation, search
"Crivelli" redirects here. For other people with this surname, see Crivelli (surname).

Carlo Crivelli ( Venice 1430? – Ascoli Piceno 1495) was an Italian Renaissance painter of conservative Late Gothic decorative sensibility,[1] who spent his early years in the Veneto, where he absorbed influences from the Vivarini, Squarcione and Mantegna. By 1458 he left the Veneto and was never to return; he spent most of the remainder of his career in the March of Ancona, where he developed a distinctive personal style that makes a contrast to his Venetian contemporary Giovanni Bellini.

Crivelli was born around 1430–35 in Venice to a family of painters, and received his artistic formation there and in Padua. After a century's work in Italian archives, the details of Crivelli's career are still sparse:[2] He is said to have studied under Jacobello del Fiore, who was painting as late as 1436; at that time Crivelli was probably only a boy. He also studied at the school of Vivarini in Venice, then left Venice, initially, it is generally believed, for Padua, where he is believed to have worked in the workshop of Francesco Squarcione and then for Zadar in Dalmatia (now part of Croatia, but then a Venetian territory) in 1459, following legal trouble after he was sentenced to prison for six months for having an affair with a married woman, Tarsia Cortese, the wife of a sailor. 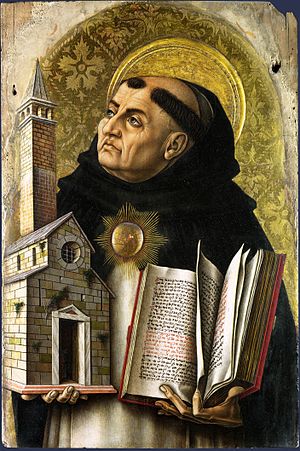 The only dates that can with certainty be given about his life as a painter are his first appearance, already a master of his own shop, in 1457, in a matter of adultery for which he was imprisoned for six months; and the earliest and the latest years signed on his pictures, 1468 on an altarpiece in the church of San Silvestro at Massa Fermana, near Fermo, and 1493 on The Dead Christ between St John, the Virgin and Mary Magdalene (Brera Gallery, Milan).

Though the artist advertised his Venetian origin in his constant signatures varying upon Carolus Crivellus Venetos ("Carlo Crivelli of Venice"),[3] Crivelli seems to have worked chiefly in the March of Ancona, and especially in and near Ascoli Piceno; there are only two pictures remaining in Venice, in the church of San Sebastiano.

He painted in tempera only, despite the increasing popularity of oil painting during his lifetime, and on panels, though some of his paintings have been transferred to canvas. His predilection for decoratively punched gilded backgrounds is one of the marks of this conservative taste, in part imposed by his patrons. Of his early polyptychs, only one, the altarpiece from Ascoli Piceno, survives complete in its original frame; all the others have been disassembled and their panels and predella scenes are divided among the world's museums.

An amorphous band of contemporaries and followers, termed Crivelleschi, show to varying degrees aspects of his style. 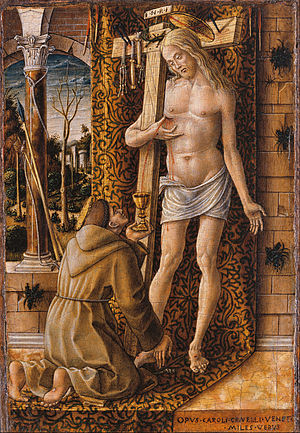 Saint Francis with the Blood of Christ, c. 1500

Unlike the naturalistic trends arising from Florence at the same time, Crivelli's style still echoes the courtly International Gothic sensibility. The urban settings are jewel-like, and full of elaborate allegorical detail.

He favored verdant landscape backgrounds, and his works can be identified by his characteristic use of fruits and flowers as decorative motifs, often depicted in pendant festoons,[4] which are also a hallmark of the Paduan studio of Francesco Squarcione, where Crivelli may have worked.

Despite his Venetian birth, his paintings have a linear Umbrian quality. Crivelli is a painter of marked individuality; unlike Giovanni Bellini, his contemporary, his works are not "soft", but clear and definite in contour, with astounding attention to detail. His use of "trompe l'oeil," often compared to painters of the Northern Renaissance such as Rogier van der Weyden, includes raised objects, such as tears and "jewels" modelled in gesso on the panel. Commissioned by the Franciscans and Dominicans of Ascoli, Crivelli's work is exclusively religious in nature. His paintings consist largely of Madonna and Child images, Pietà, and the by-then-old-fashioned altarpiece known as the polyptych. Often filled with images of suffering, such as gaping wounds in Christ's hands and side and the mouths of mourners twisted in agony, Crivelli's work appropriately fulfills the spiritual needs of his patrons. These ultra-realistic, sometimes disturbing qualities have often led critics to label Crivelli's paintings "grotesque", much like his fellow Northern Italian painter, Cosimo Tura.

Few artists seem to have worked with more uniformity of purpose, or more forthright command of his materials; this singlemindedness was recognised by the number of prestigious commissions he was awarded.[4] It is possible that Carlo was of the same family as the painter Donato Crivelli[4] (who was working in 1459, and was also a pupil of Jacobello); Vittorio Crivelli, with whom he occasionally collaborated, was his younger brother. Pietro Alemanno, a painter who had travelled to the March of Ancona from Germany/Austria, was his pupil/collaborator.

Carlo Crivelli died in the Marche (probably Ascoli Piceno) around 1495. His work fell out of favor following his death and he is not mentioned in Vasari's Lives of the Most Excellent Painters, Sculptors, and Architects (which is notably Florentine in its outlook). He had something of a revival, especially in the UK, during the time of the pre-Raphaelite painters, several of whom, including Edward Burne-Jones were admirers of Crivelli. Admiration for his work declined with the decline of the pre-Raphaelites during the Modernist period, but recent writings on his work and a rehanging of his work in the National Gallery, London, are again bringing him more attention.

The National Gallery, London has several examples of his work, including the Annunciation with St Emidius, possibly his most famous painting, and the Beato Ferretti (of the same family as Pope Pius IX) in religious ecstasy. Another of his principal pictures is in San Francesco di Matelica; in Berlin is a Madonna and Saints (1491); in the Vatican Gallery a Dead Christ, in the Musée des Beaux-Arts de Strasbourg is an Adoration of the Shepherds and in the Brera of Milan the Madonna of the Candle.[4] There are also examples of his work in several major American galleries. The Madonna with child and saints can be seen in the town of Monte San Martino in Marche. In addition, the otherwise unremarkable church of San Giacomo Maggiore in the small hill town of Massignano in Marche has a Madonna and Child by Crivelli. 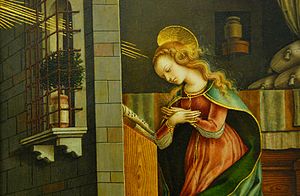 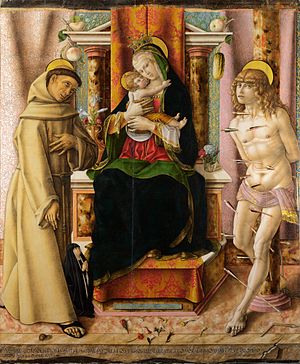 The Virgin and Child with Saints Francis and Sebastian, 1491 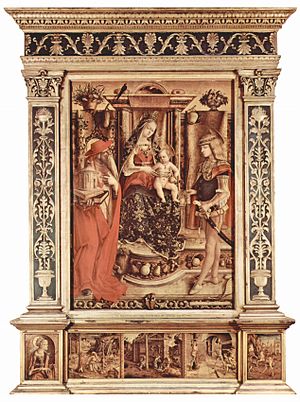