"Carloman II" might refer to the second Carolingian of that name, otherwise known as Carloman I.

Carloman II (c. 866 – 12 December 884), King of Western Francia, was the youngest son of King Louis the Stammerer and Ansgarde of Burgundy, and became king, jointly with his brother Louis III of France, on his father's death in 879. 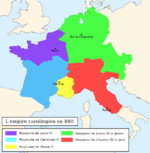 Francia:
the realm of Carloman II after the division of March 880 is shown in blue

Some nobles advocated electing a sole king, but eventually both brothers were elected kings. Although doubts were cast upon their legitimacy, the brothers obtained recognition and in March 880 divided their father's realm at Amiens, Carloman receiving Burgundy and Aquitaine.

However, Duke Boso had renounced his allegiance to both brothers and had been elected King of Provence. In the summer of 880 the brothers Carloman and Louis marched against him, took Mâcon and the northern parts of Boso's realm. They united their forces with those of Charles the Fat and unsuccessfully besieged Vienne from August to November. Only in the summer of 882, Vienne was taken after being besieged by Richard, Count of Autun.

About the same time, in August 882, Carloman became sole king owing to his brother's death, but the kingdom was in a deplorable condition partly owing to incursions from the Norman raiders, and his power was very circumscribed. There were revolts of the feudal lords even in Burgundy.

Carloman met his death while hunting on 12 December 884 and was succeeded in the rule by his cousin, the Emperor Charles the Fat.