Several of the Carlist pretenders to the Spanish throne were also known as Don Carlos.

Carlos, Prince of Asturias, also known as Don Carlos (8 July 1545 – 24 July 1568), was the eldest son and heir-apparent of King Philip II of Spain. His mother was Maria Manuela of Portugal, daughter of John III of Portugal. Carlos was mentally unstable and was imprisoned by his father in early 1568, dying after half a year of solitary confinement. His fate was a theme in Spain's Black Legend, and inspired a play by Friedrich Schiller and an opera by Giuseppe Verdi.

Carlos was born at Valladolid on 8 July 1545. His mother, María Manuela of Portugal, died four days later from a haemorrhage she had suffered after the birth.[1] The young Infante Carlos was delicate and deformed. He grew up proud and willful and, as a young adult, began to show signs of mental instability. Many of his physical and psychological afflictions may have stemmed from the inbreeding common to the House of Habsburg and the royal houses of Portugal (House of Aviz) and Spain. Carlos had only four great-grandparents instead of the maximum of eight,[2] and his parents had the same coefficient of coancestry (1/8) as if they were half siblings. He had only six great-great-grandparents, instead of the maximum 16;[2] his maternal grandmother and his paternal grandfather were siblings, his maternal grandfather and his paternal grandmother were also siblings, and his two great-grandmothers were sisters. 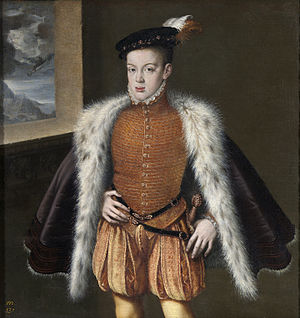 In 1559 Prince Carlos was betrothed to Elizabeth of Valois, eldest daughter of King Henry II of France. However, for political reasons, she instead married King Philip in 1560. Three other brides were then suggested for the Prince: Mary, Queen of Scots; Margaret of Valois, youngest daughter of Henry II of France; and Anna of Austria, who was to later become Philip's fourth wife, and was a daughter of Philip's cousin, the Emperor Maximilian II. It was agreed in 1564 that Carlos should marry Anna.[3]

Carlos was recognized in 1560 as the heir-apparent to the Castilian throne, and three years later as heir-apparent to the Crown of Aragon as well. He became also the 218th Knight of the Order of the Golden Fleece. He often attended meetings of the Council of State (which dealt with foreign affairs) and was in correspondence with his aunt Margaret, who governed the Low Countries in his father's name.[4]

In 1562 Carlos fell down a flight of stairs, which caused serious head injuries. His life was saved by a trepanation of the skull, performed by the eminent anatomist Andreas Vesalius.[5] After his recovery, Carlos became wild and unpredictable in his behavior. He took a dislike to the Duke of Alba, who became the commander of Philip's forces in the Netherlands, a position that had been promised to Carlos. Carlos possibly made contacts with representative of the Count Egmont from the Low Countries, who was one of the leaders of the revolt against the Spanish. He also exhibited an antipathy towards his father, whose murder, according to Carlos' confessor, he supposedly contemplated at one time.[6] In the autumn of 1567 he made preparations to flee to the Netherlands.[6] However, John of Austria, whom Carlos tried to draw into his plans, revealed everything to King Philip.[7]

Just before midnight on 17 January 1568 Philip II, in armour, and with four councillors, entered Don Carlos' bedchamber where they declared his arrest, seized his papers and weapons, and nailed up the windows. Carlos remained in solitary confinement at the Alcázar of Madrid until his death six months later.[8] It was later claimed that he was poisoned on the orders of King Philip, especially by William the Silent in his Apology, a 1581 propaganda work against the Spanish king.[9] Modern historians think that Don Carlos died of natural causes. He grew very thin and developed eating disorders during his imprisonment, alternating self-starvation with heavy binges.[10]

Carlos left an unfavourable impression on some foreign ambassadors. The Venetian ambassador Hieronymo Soranzo thought that Carlos was "ugly and repulsive" and claimed that Carlos liked to roast animals alive and once tried to force a shoemaker to eat shoes Carlos had found unsatisfactory. Another Venetian, Paolo Tiepolo, wrote: "He [Prince Carlos] wished neither to study nor to take physical exercise, but only to harm others."[11] 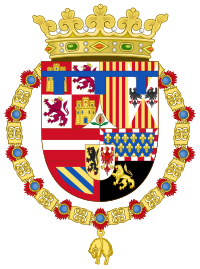 The idea of King Philip confining and murdering his own son later played a minor role in establishing the anti-Spanish Black Legend.[citation needed] It also formed the basis for Friedrich Schiller's 1787 tragedy Don Karlos, Infant von Spanien; Schiller's play was adapted into several operas, most notably Giuseppe Verdi's Don Carlos. Schiller based his work on a novel written in 1672 by the French Abbé, César Vichard de Saint-Réal, which was also the source used by the English writer Thomas Otway for his play Don Carlos, Prince of Spain.

The story of a king jailing his own son is also the basis for the Spanish play [La vida es sueño] (Life Is a Dream) (1635), by Pedro Calderón de la Barca; however, this play does not explicitly refer to Don Carlos.

The role of Carlos is portrayed by Canadian actor Mark Ghanimé in the CW show Reign.[12]