Carlos López-Cantera (born December 29, 1973) is an American politician from the state of Florida. He is the lieutenant governor of Florida, a position that he was sworn into on February 3, 2014.[2] He was elected property appraiser of Miami-Dade County on August 14, 2012.[3] From 2004-2012, he represented District 113 in the Florida House of Representatives, where he served as the Republican majority leader[4] during the final two years of his term. On January 14, 2014, Florida governor Rick Scott announced López-Cantera's appointment to serve out the term of Jennifer Carroll, who resigned in March 2013.[5][6]

López-Cantera was born on December 29, 1973 in Madrid, Spain, the son of Esther “Shelly” Smith Fano and Carlos López-Cantera.[7][8] His father is Cuban. His father is Catholic and his mother is Jewish.[2] He was born two months prematurely and returned with his parents to reside in Miami, Florida, once he was healthy enough to travel. He earned an Associate of Arts degree from Miami-Dade Community College in 1994 and a Bachelor of Business Administration with a minor in political science from the University of Miami in 1996.[9] 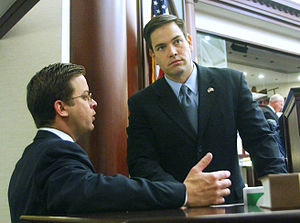 López-Cantera and Marco Rubio in 2007

In 1997, he was a facilitator for the Florida Senate's criminal justice committee.[10] In 2002, he made an unsuccessful bid for a seat in the Florida House of Representatives. Two years later, López-Cantera won his first election to the Florida House of Representatives to the 113th District in November 2004, and was successively reelected in 2006, 2008 and 2010. He was House majority whip from 2008 to 2010 and the House Majority Leader from 2010 to 2012.[11]

López-Cantera was twice elected by his colleagues from Miami-Dade County to be the chairman of the Miami-Dade Legislative Delegation from 2011-2012. On August 14, 2012, he became the second property appraiser to be elected by the citizens of Miami-Dade, a county with a population of more than 2.5 million people and almost 1,000,000 properties. On July 15, 2015, López-Cantera announced his candidacy to run in the 2016 United States Senate election in Florida to replace retiring Senator Marco Rubio, who was running for president of the United States.

López-Cantera has been married to his wife Renee since 2005. They have two daughters.[12]