Carlos Sastre Candil (pronounced: [ˈkaɾ.los ˈsas.tɾe ˈkandil]; born 22 April 1975) is a former Spanish professional road bicycle racer and winner of the 2008 Tour de France. He consistently achieved great results in the Vuelta a España and equally good showings in the Tour de France. Sastre established himself as a strong and stable climbing specialist, and after working to improve his individual time trial skills, he became a contender for the top GC spots in the Grand Tours. In total, Sastre finished in the top ten overall of fifteen Grand Tours during his career.

Also remarkable was that Sastre never tested positive or was caught in a doping investigation given he performed at the top level of cycling for many years.[2] Sastre rode for UCI Professional Continental team Saunier Duval–Prodir in 2011, before retiring.[3] Sastre continues to be widely regarded, following the Lance Armstrong affair, as one of the very few 'clean' riders to have won the Tour de France in modern times as he has never been involved in a doping affair.[4]

When Sastre was young, professional cyclist Francisco Ignacio San Román lived in his parents's house during military service.[5] Sastre was at first coached by his father, until he became an amateur.[5]

Sastre signed his first professional contract in 1997 with ONCE. In his five years at ONCE he mostly served as a domestique and only managed a few wins, though he showed his strength in the mountains with several good results, most notably winning the mountain competition in the 2000 Vuelta a España.

In 2002 he switched to Team CSC, where he filled the role of captain in the Vuelta a España and, until 2005, had a free role in the Tour de France. This resulted in his winning the 13th stage of the 2003 Tour de France, which Sastre won with a pacifier in his mouth, as a greeting to his infant daughter.[6] Sastre finished 2 minutes 32 seconds ahead of team captain Tyler Hamilton on the stage.

Before the 2004 season, Carlos Sastre and teammate Ivan Basso trained extensively to improve their individual time trial skills, making them better all-round riders. They went to Boston to train on MIT's wind tunnel.[7] This helped Sastre improve his Vuelta a España performance, ranking 6th in the overall classification, as well as 8th in the 2004 Tour de France. 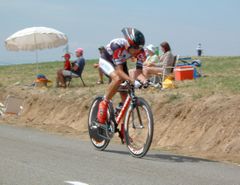 In the 2005 Tour de France he was a domestique for Ivan Basso, and 21st in the overall classification. However, as the captain of Team CSC's 2005 Vuelta a España campaign, Sastre finally reached the podium of a Grand Tour, finishing in third place behind Denis Menchov and initial winner Roberto Heras. Heras was later disqualified due to a positive EPO test, making Sastre the de facto second placed rider of the competition. After the Vuelta a España, he extended his contract with Team CSC for another year. In May 2006 he signed a new contract which expired after the 2008 season.

Before the 2006 Giro d'Italia in May, Sastre decided to ride the Giro d'Italia to help Ivan Basso to win,[8] indicating that he would ride all three Grand Tours; the Giro and Tour in support of Basso and the Vuelta as team captain. In the Giro, Sastre's pace on select mountain stages helped Basso win the overall classification. Sastre finished 43rd in the GC of the 2006 Giro.

Days before the 2006 Tour de France started in July, Team CSC suspended Ivan Basso as his name was brought up in the Operación Puerto doping case. This meant Sastre became the CSC team captain at the 2006 Tour. Even though his main focus for the season had been the 2006 Vuelta a España in September, this Tour was a great opportunity for Sastre to prove himself as a Tour GC contender. Through the mountain stages, Sastre proved himself the strongest mountain rider in the peloton, beating Floyd Landis by one minute and 59 seconds and Andreas Klöden by two and a half minutes on mountain climbs.[9] Sastre was placed well on stage 15, and came in 2nd on both stage 16 and 17, where he closed the gap to the then yellow jersey Óscar Pereiro. Before the penultimate stage of the Tour, the stage 19 individual time trial, Sastre was the second placed rider overall, trailing race leader Óscar Pereiro by 14 seconds. However, on the final time trial, which stretched 57 kilometres between Le Creusot and Montceau-les-Mines, Sastre finished 20th, losing several minutes to Pereiro, eventual overall winner Floyd Landis and Andreas Klöden, who took third place overall. Sastre thus finished the 2006 Tour in 4th place. Floyd Landis has since been stripped of this title, making Sastre 3rd in the 2006 Tour de France.

When he finished the 2006 Vuelta 4th overall, Sastre, who also rode the Giro d'Italia and Tour de France in 2006, became one of a rare breed of riders to finish all three Grand Tours in one year. 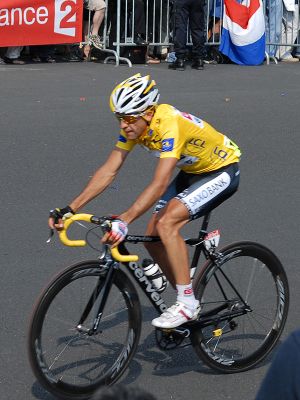 Coming into the 2008 Tour de France, Sastre was considered one of the favorites to win the race along with Australian Cadel Evans of Team Silence–Lotto, Spaniard Alejandro Valverde of Caisse d'Epargne and Russian Denis Menchov of Rabobank. He also faced competition within his own team from brothers Andy and Fränk Schleck, despite officially being the leader of CSC–Saxo Bank.

Sastre had a quiet, understated opening to the tour. After a lacklustre opening time-trial, he remained relatively restrained in the opening mountain stages in the Pyrenees and opted to stay defensive and follow the wheel of his main rivals. This allowed his CSC teammate Fränk Schleck to claim the yellow jersey at the finish to stage 15 at Prato Nevoso. However, on the crucial 17th stage, Sastre showed his class and mountain climbing prowess, attacking at the bottom of the final climb of the day, Alpe d'Huez, finishing 2 minutes and 15 seconds ahead of Evans,[10] claiming both the stage win and the yellow jersey.[11] Sastre, knowing that a slender lead over a strong time-trialist like Evans may not have been enough to secure overall victory going into the penultimate stage, sought to gain an advantage of at least a couple of minutes over his closest rivals.

Following his victorious Stage 17 attack, Sastre took a lead of 1 minute and 24 seconds over teammate Fränk Schleck into the final time trial, although, more crucially, he had a further 10 seconds advantage over Evans, a man considered to be a more accomplished time trialist,[10] who was widely expected to overcome the deficit and leapfrog Sastre into first place. However, Sastre managed to hold onto his lead in the time trial, finishing the Tour with a 58-second lead.[10] Following his overall victory in the general classification, Sastre found it hard to express his joy at finally achieving a boyhood dream;[10]

Sastre's victory capped an exceptional 2008 tour for CSC–Saxo Bank, as they also won the young rider classification with Andy Schleck, the overall team classification, as well as 2 stages, the latter being won by Sastre, on l'Alpe d'Huez.

His victory was however criticized by Lance Armstrong, who said the 2008 Tour was a joke. Armstrong later apologized for this to Sastre.[12]

Sastre and CSC could not agree on a new contract, so Sastre left the team at the end of the year.[13]

After the Tour, Sastre ended up focusing on the Vuelta a España looking to double his victories. He later finished 3rd overall.

Sastre joined the new Cervélo TestTeam for the 2009 season. He won the high mountain Stage 16 of the 2009 Giro d'Italia, which had been called the Giro's queen stage, after seven hours and twelve minutes. His decisive attack saw him break free from a group of general classification contenders to get to the summit of Monte Petrano just under half a minute faster than the group he left.[14] After seeming off his form in Stage 17 of that race, Sastre rebounded with another solo ride to victory in Stage 19 to Mount Vesuvius.[15] He then completed the Giro with a solid ride in the final time-trial around Rome to hold off Ivan Basso and finished 2nd overall.[16]

In the 2009 Tour de France, Sastre attempted to defend his title but had a quiet year finishing 16th overall.