The Carlton Club is a gentlemen's club in London which describes itself as the "oldest, and most important of all Conservative clubs."[1] Membership of the club is by nomination and election only. 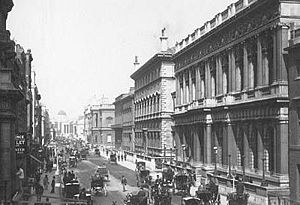 Pall Mall with the Carlton Club, photographed by James Valentine

The club was founded in 1832, by Tory peers, MPs and gentlemen, as a place to coordinate party activity after the party's defeat over the First Reform Act. It later played a major role in the transformation of the Tory party into its modern form as the Conservative Party. The club lost its role as a central party office with the widening of the franchise after the Reform Act 1867, but remained the principal venue for key political discussions between Conservative ministers, MPs and party managers.

Where it was formed

The club was formed at the Thatched House Tavern in 1832 and its first premises were in Carlton Terrace (provided by Lord Kensington), from which it drew its name. These premises were quickly found too small. The second club house was situated next to the Reform Club in Pall Mall, London, and was purpose-built in 1835. It was replaced by a third club house on the same site in 1856.

The Caen stone used on the façade of the third building proved unsuitable in the London atmosphere and had to be completely replaced in 1923–1924.[2]

The club is most famous for the Carlton Club meeting of 19 October 1922, in which backbench Conservative MPs decided to overthrow their leader Austen Chamberlain and withdraw from the David Lloyd George–led coalition government. MPs voted 187 to 87 in favour of discontinuing the coalition, after speeches from Bonar Law and Stanley Baldwin, with Baldwin saying that the fact Lloyd George was a 'dynamic force' was a danger to the stability of the Conservative party.[3]

Bombing by the Luftwaffe, and move to current building

The club suffered a direct hit during the Blitz on 14 October 1940,[4] No-one was killed in the explosion, although the entire building was destroyed. The Carlton at once moved to its current premises, at 69 St James's Street, London, formerly the premises of Arthur's Club, which had closed earlier in 1940.[5] The current Georgian clubhouse is architecturally important (Grade 2* listed) and includes two elegant dining rooms, together with a collection of political portraits and paintings dating back to the 18th century, imported from ruins of the old club house and the former Junior Carlton Club (see below). The current Carlton has not retained any of the furnishings belonging to the building when it was Arthur's club, apart from the war memorial plaque in the entrance. The walls of the Disraeli and Macmillan rooms and their windows at the back of the club were part of the fabric of the original White's Club building.

The Junior Carlton Club, which was entirely separate from the Carlton itself, was established in 1864 and occupied a large purpose-built club house, completed in 1869, at 30 Pall Mall, almost opposite the Carlton. Their redevelopment of their premises into a modern 1960s office-style block as a prototype 'club of the future' led to mass resignations from that club, and in December 1977 it formally merged with the Carlton Club, with negotiations conducted by Harold Macmillan.

At 8:39 p.m. on 25 June 1990, the Carlton Club was bombed by the Provisional Irish Republican Army (IRA), injuring more than 20 people.[6] Lord Kaberry later died of his injuries received in the attack.[7]

Many Conservative politicians have been members. The leader of the Conservative Party is invited to become an honorary member. Iain Duncan Smith refused membership when it was offered to him.

Traditionally, only men could become full members after being proposed and seconded by a number of current members. From the 1970s onwards, women were allowed to become associate members, meaning they were unable to vote. On becoming Conservative leader in 1975, Lady Thatcher was made an honorary member of the club and, as such, until 2008 was the only female member entitled to full membership.

David Cameron accepted honorary membership of the club as of 22 May 2008. Lady Thatcher was elected as the club's second president (the first was Harold Macmillan) in May 2009.

An entirely separate, unrelated Ladies' Carlton Club was established after the First World War as a social and political centre for women Conservatives. It closed in 1958.

The current chairman is Thomas Galbraith, 2nd Baron Strathclyde. A full history of the club was published to mark its 175th anniversary in 2007.