Carnaby Street is a pedestrianised shopping street in Soho in the City of Westminster, central London. Close to Oxford Street and Regent Street, it is home to fashion and lifestyle retailers, including a large number of independent fashion boutiques. 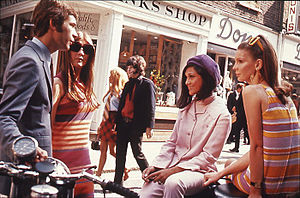 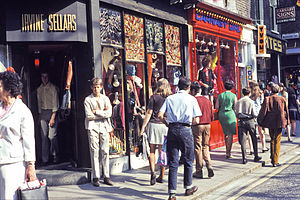 Carnaby Street derives its name from Karnaby House which was built in 1683 to the east. It is not known why the house was so named. The street was probably laid out in 1685 or 1686. First appearing in the ratebooks in 1687, it was almost completely built up by 1690 with small houses. A market was developed in the 1820s. In his novel, Sybil (1845), Benjamin Disraeli refers to "a carcase-butcher famous in Carnaby-market".[1]

This area is notable for a cholera outbreak in 1854 leading to an early application of fundamental epidemiological principles to resolve the crisis. John Snow, the physician who recognised the cases were concentrated near a pump on Broad Street communicated the finding on a map-based graphic. It led to the pump being locked and the reduction in cases of cholera was rapid.

In 1934, Amy Ashwood Garvey and Sam Manning opened the Florence Mills Social Club,[2] a jazz club that became a gathering place for supporters of Pan-Africanism,[3] at number 50.

The first boutique, His Clothes, was opened by John Stephen in 1958 after his shop in Beak Street burned down[4] and was followed by I Was Lord Kitchener's Valet, Kleptomania, Mates, Ravel, and others.

By the 1960s, Carnaby Street was popular with followers of the mod and hippie styles. Many independent fashion boutiques, and designers such as Mary Quant, Marion Foale and Sally Tuffin,[5] Lord John, Merc, Take Six, and Irvine Sellars had premises in the street and various underground music bars such as the Roaring Twenties opened in the surrounding streets. Bands such as the Small Faces, The Who, and Rolling Stones appeared in the area to work (at the legendary Marquee Club round the corner in Wardour Street), shop, and socialise, it became one of the coolest destinations associated with 1960's Swinging London.

The Carnaby Street contingent of Swinging London stormed into North American and international awareness with the 15 April 1966 publication of Time magazine's cover[6] and article that extolled this street's role:

In October 1973, the Greater London Council pedestrianised the street. Vehicular access is restricted between 11 am and 8 pm. A comparison of before and after number of pedestrians entering the area indicated a 30% increase in pedestrian flows as a result of the pedestrianisation. A campaign commenced early in 2010 to call for pedestrianisation in the adjacent area of Soho.[8]

Westminster City Council erected two green plaques, one at 1 Carnaby Street dedicated to fashion entrepreneur John Stephen, who began the Mod fashion revolution and another at 52/55 Carnaby Street is dedicated to the Mod pop group The Small Faces and their manager Don Arden. 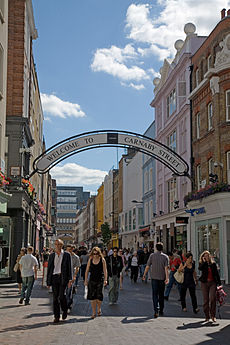 Carnaby Street was satirised by The Kinks in their 1966 hit, "Dedicated Follower of Fashion," which contains the line "Everywhere the Carnabetian Army marches on, each one a dedicated follower of fashion".

It was mentioned in the 1967 film Smashing Time. One of the songs, 'Carnaby Street', features the lyric: You'll pay for the gear on display to appear on the scene/ It's no good being mean/ They'll have your every bean.

In 1969, Peggy March recorded an album called In der Carnaby Street, with a hit song of the same name.

A song by The Jam, "Carnaby Street", was written by bassist Bruce Foxton. It was the B-side of single "All Around The World".