The School of Computer Science (SCS) at Carnegie Mellon University in Pittsburgh, Pennsylvania, US is a leading private school for computer science established in 1988. It has been consistently ranked among the top computer science programs over the decades. U.S. News & World Report currently ranks the graduate program as tied for 1st with Massachusetts Institute of Technology, Stanford University, and University of California, Berkeley.[1] 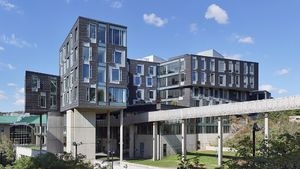 In the past 15 years, researchers from Carnegie Mellon' School of Computer Science have made developments in the fields of algorithms, computer networks, distributed systems, parallel processing, programming languages, robotics, language technologies, human–computer interaction and software engineering.

On July 1965, a group of faculty, including Allen Newell, Herbert A. Simon, and Alan J. Perlis, as well as the faculty from the Graduate School of Industrial Administration (now called the Tepper School of Business), staff from the newly formed Computation Center, and key administrators created The Department of Computer Science, one of the first such departments in the nation. Their mission statement was "to cultivate a course of study leading to the PhD degree in computer science, a program that would exploit the new technology and assist in establishing a discipline of computer science." The educational program, formally accepted in October 1965, drew its first graduate students from several existing academic disciplines: mathematics, electrical engineering, psychology, and the interdisciplinary Systems and Communications Sciences program in the Graduate School of Industrial Administration. The department was housed within the Mellon College of Science.

With support from Newell, Simon, Nico Haberman, Provost Angel Jordan and President Richard Cyert, the department of computer science began a two-year status as a "floating" department in the early months of 1986. Then, the Department began to grow, both academically and financially. In 1988, the Department was officially elevated to the status of a School of Computer Science, among the first such schools in the country.

During the 1980s, the department offered only a PhD study program, with no master's degree as an intermediate step. The PhD program required a minimum of six years of residency. It was called the "do or die" program among the graduate students, because a student could not drop a PhD and receive a master's degree. It had quickly focused on computer networking, operating systems (Mach), and robotics.

Women@SCS is an educational program at Carnegie Mellon whose mission is to create, encourage, and support women's academic, social and professional opportunities in the computer sciences and to promote the breadth of the field and its diverse community. Women@SCS has initiated programs, such as the Big/Little Sister program for undergraduates, the invited Speaker Series for graduates, as well as dinners and other social and academic events. Women@SCS also sponsors outreach projects such as "Is there a robot in your future?" workshop for middle school girls. In general, the committee strives to promote a healthy and supportive community atmosphere.

SCS4ALL is an umbrella organization at Carnegie Mellon that promotes diversity in the School of Computer Science and coordinates outreach programs to broaden interest, understanding, and diversity in computing. SCS4ALL shares many of the core goals of Women@SCS and has expanded to develop more inclusive programs. Within SCS, the organization works to develop social and professional activities and leadership opportunities, such as the social trivia night, the "Develop Your Elevator Pitch" event, panel discussions with industry leaders, and the annual celebration of diversity SCS Day. In outreach, the organization organizes interactive presentations about computer science at local elementary, middle, and high schools. SCS4ALL is open to all students in the SCS and seeks to involve all communities in SCS in shaping the organization and its events. 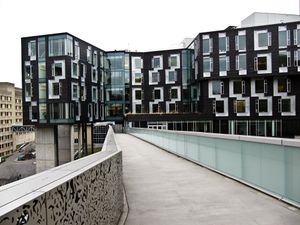 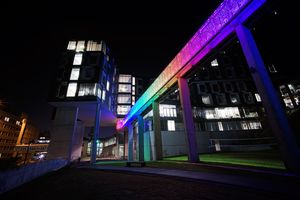 The Randy Pausch memorial bridge has LEDs that glow different colours at night.

The Gates Center for Computer Science and the Hillman Center for Future-Generation Technologies are home to much of the School of Computer Science. The $98 million complex was opened in 2009.[7] It has 217,000-square-foot (20,200 m2) of floor space, including about 310 offices, 11 conference rooms, 32 labs, 8,000 square feet (740 m2) of project space and the Planetary Robotics Center. It also houses 12 classrooms, including a 250-seat auditorium.[8]

Additionally, the Gates Center connects to the Purnell Center, which houses the School of Drama, via the Randy Pausch Memorial Footbridge. The bridge represents Professor Pausch's own devotion to linking computer science and entertainment, as he was a co-founder of Carnegie Mellon's Entertainment Technology Center.[9]

Mack Scogin Merril Elam Architects of Atlanta, Georgia were the lead architects.[7] The centers were designed to achieve at least a LEED (Leadership in Energy and Environmental Design) Silver rating.[8]

SCS research professor Scott Fahlman is credited with the invention of the smiley face emoticon. He suggested the emoticon on an electronic board in 1982 as a way for board readers to know when an author was joking. The text of Fahlman's original post was lost for nearly 20 years but was later recovered from backup tapes:[13]

In 2007, Tartan Racing won the DARPA Urban Challenge, in which 11 autonomous ground vehicles raced over urban roadways. In the challenge, team vehicles were required to obey all California driving laws, share the road with other drivers and robotic cars, and complete the course in under six hours. Tartan Racing won the $2 million cash prize with Boss, a reworked 2007 Chevy Tahoe. Averaging about 14 miles (23 km) an hour for a 55-mile (89 km) trip, Boss beat the second-place team, Stanford Racing, by just under 20 minutes.[15]

The School established a number of honors and awards.[16]

Faculty members from the School of Computer Science have received international recognition for achievements within their fields. These honors include memberships and fellowships in the National Academy of Sciences, the National Academy of Engineering, the American Association for the Advancement of Science, the Association for Computing Machinery, the Institute for Electrical and Electronic Engineers and The Alfred P. Sloan Foundation.[17] Twelve SCS faculty and alumni have won the A. M. Turing Award, the Association for Computing Machinery's most prestigious award,[18] often called the "Nobel Prize of computing." These include Raj Reddy, Manuel Blum and Edmund M. Clarke of the active faculty, in addition to Emeritus Faculty Dana Scott.[19]