Carnegie Mellon University is home to a variety of unique traditions, some of which date back to the early days of its over 100-year history. Many of these traditions hearken to the university's strength in engineering such as the buggy races and the mobots while others are purely social in nature such as Spring Carnival and The Fence.[1] 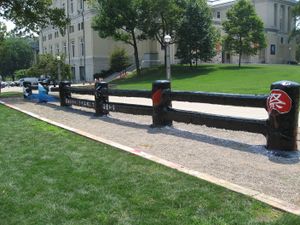 The first great tradition at Carnegie Mellon is The Fence, which is the most painted object on campus, and lies in the middle of the Cut. The Fence frequently displays witty or poignant messages, but is just as often used to advertise upcoming events or recent accomplishments. Because of its highly visible location on campus, it is an ideal place to proclaim one's message to as much of the student body as possible. The original wooden fence was replaced in 1993 when it collapsed under its own weight. Today, a concrete and steel reinforced fence stands where the original one stood, imitating the size it would be today. Students still paint the fence in an effort to break the record held by the original as the world's most painted upon object.

The Fence's origins date back to the early days of Carnegie Institute of Technology when The Cut was still a valley that separated the Carnegie Tech buildings from the Margaret Morrison women's school. Over the valley spanned a bridge which the men of Carnegie Tech realized was a strategic spot for meeting the women of Maggie Mo as they crossed the cut. However, when The Cut was filled in to form the current-day grassy field, the bottleneck disappeared. In its stead, the administration erected a fence to stand in as a meeting spot. However, the university's students took a negative view of the structure not understanding the point of it. Administration was just about to give up and tear it down when the night before a fraternity painted The Fence in the middle of the night advertising a party on campus. The party turned out to be a huge success, as has the tradition of painting the fence. The administration relented on their plans for removing the fence.

Tradition dictates that The Fence only be painted after midnight and before sunrise, and only in its entirety. It must be painted by hand using brushes. If it is painted with spray paint or rollers, the painters would be cited for vandalism. A group wishing to paint the Fence must station two representatives on the small gravel region surrounding it; so long as two guards remain within the boundary, no other group may "take" the Fence. This sometimes leads to fraternities or other groups setting up a tent or campsite just inside the boundary so that they may keep control of the Fence for extended periods of time.

In August 2008, the graduating class of 2008 at the Carnegie Mellon Silicon Valley Campus brought the tradition to California by installing their own version of the fence, and dedicating it to Randy Pausch who died in that year. 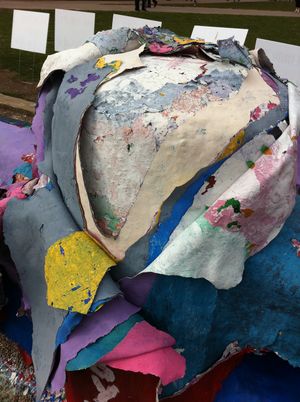 Two years of paint layers are visible after the defacing

On March 21st, 2011, six freshman Carnegie Mellon students defaced the fence. They were stopped by fellow students, CMU Police Officers, and representatives from the Office of Student Affairs. A hacksaw was used to cut away over two years' worth of layers of paint.[2][3] The following night, hundreds of CMU students helped paint the fence in an effort to "heal" it.[4] Facilities Management Services has taken the responsibility of repairing the fence, instead of gluing it back together the chunks were removed on March 23 leaving dozens of different layers visible. The fence was once again vandalized on June 22, again with a saw.

Usually held in April, Spring Carnival is the biggest event of the Carnegie Mellon school year. Students have a four-day weekend to enjoy the Carnival festivities. Many students work hard all year to make it a success, and the Pittsburgh community is invited to attend. Alumni often return for the festivities, and Reunion coincides with the weekend. Spring Carnival features "Midway", with all the standard carnival attractions, and a Buggy race which is run over the course of the weekend. Many organizations across campus construct both a booth for Midway and a buggy for Sweepstakes. Judges decide on winners in several different categories.

Two pushers exchange the buggy for Kappa Delta Rho on the first hill of Sweepstakes.

Buggy, officially called Sweepstakes, is a race around Schenley Park. It can be thought of as a relay race with five runners, using the buggy vehicle as the baton. Entrants submit a small, usually torpedo-shaped, vehicle that is pushed uphill and then allowed to free-roll downhill. The driver (who–like all participants–must be a Carnegie Mellon student, and is almost always short, light, and female) lies down inside the vehicle with the steering and brake controls. The vehicles are completely unpowered, including the prohibition of energy storing devices such as flywheels. Brakes are required but generally rarely used. Often, brakes are applied only as a last resort to prevent a crash, or to slow the buggy at the finish for the pusher to catch up because the rules specify that the pusher must be in contact with buggy at the finish line or be disqualified. Drivers who have been forced to apply the brakes due to another driver cutting them off may appeal for a re-roll in another heat without penalty. The second-to-last corner of the race, a sharp 110-degree right turn, is affectionately called "The Chute" and is lined with hay bales to prevent potential driver and spectator injury. Speeds can be quite high in the chute, often in the vicinity of 35 mph. Student Dormitory Council (SDC) holds the current men's record of 2:03.30 set in 2009 while capturing their first win in the men's division. From 1988-2008 the men's record of 2:06.20 seconds was held by SPIRIT. SDC also holds the current women's record of 2:25.60 (also set in 2009).

For many years extensive experimentation and innovation evolved buggy designs. Prior to 1980 the primary format used 4 wheels in a symmetrical layout with respect to the direction of travel. Exceptions to this did occur with both 3-wheeled buggies[5] and 2 wheeled "bikes" [6]being entered on occasion. Since 1980, new materials, braking systems and wheel orientations provided significant opportunity for experimentation. Alignment of wheels received particular attention. The first successful 3 wheeled buggys were developed in the early 80s led by PKA and SN. Development of two wheeled buggies[7] by Delta Upsilon from 1986-1989 continued the theme of wheel alignment. In 1988 Delta Upsilon broke the course record with a time of 2:08.5 - a record that stood only briefly as Spirit surpassed that time later that day and further lowered the record time the following day with the record time mentioned above that stood for 20 years. Two wheeled buggies were later eliminated from competition for safety reasons through modifications to the rules.

PiKA and SPIRIT took every Sweepstakes championship from 1986 until 2000 when SDC won the women's race and 2001 when Fringe won the men's race. PiKA continued its success in the 2000s, setting the consecutive wins record by winning for seven years in a row (2002-2008). SDC took the title in the men's race in 2009 breaking PiKA's streak and setting a new record. Fringe took the men's title in 2010 after a dominant SDC was removed from competition due to a supposed fire safety violation. SDC then won the men's and women's division's in 2011. [8]

Live media coverage of the Sweepstakes races has historically been provided by WRCT-FM, the school's student-run radio station. In recent years, campus television station cmuTV has broadcast live video coverage of the races with commentary from WRCT-FM. In the fall of 2008 the Buggy Alumni Association was founded to preserve the history of the sport, assist with keeping alumni connected to the event and assist the current students in maintaining the race's continuing existence. The race videos are available on DVD from cmuTV after the races end. 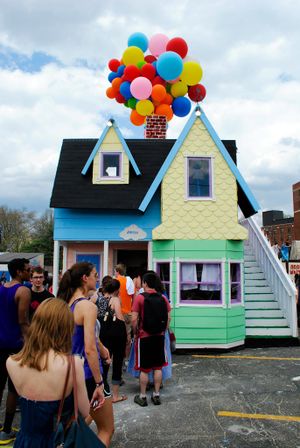 A booth in Carnegie Mellon University's 2013 Booth Competition, a part of the spring Carnival

For Carnival Weekend, the Morewood parking lot is turned into "Midway." Booths are constructed by campus organizations, featuring (usually) free games and cheap giveaway prizes. Some of the booths are intricate, multi-level affairs, showing off the creativity and energy of the students who construct them. The Friday of the week before Carnival is known as "Move On". All the large organizations move their supplies, materials, tools, and pre-fabricated components onto Midway. Build week commences from that Friday night, and for the entire week, organizations steadfastly build their booths, preparing for the official opening of Midway at 3 pm the following Thursday. Each year, an overall theme for the booths is chosen. Then each organization chooses a sub-theme and builds their booth accordingly. The construction of these booths is a competition and each booth is judged on various criteria, including both daytime and nighttime appearance, adherence to theme, game playability, environmentalism, and appropriateness of prizes.

Portable carnival rides are brought in and set up, along with standard carnival concession food. Various musical acts, improv comedy troupes, and other performances are staged in a nearby tent running throughout the weekend and providing a backdrop to the entire spectacle.[9]

File:CarnegieMellonMobot.jpg
A mobot approaches the end of the course, with Hamerschlag Hall in the background.

"Mobot," a general term resulting from shortening "mobile robot", is an annual competition at Carnegie Mellon that made its debut in 1994. In this event, robots try (autonomously) to pass through gates, in order, and reach the finish line. There is a white line on the pavement connecting the gates, and the line is normally used to find the gates, though it is not mandated by the rules that the robots follow the line. Towards the end of the course, the lines split and merge randomly, and knowledge of which line leads to the next gate is needed to consistently finish the course. This information is provided by the judges shortly before the actual competition begins. The current undergraduate mobot course record of 1:17:10 is held by Nathaniel Barshay for his entry "AEPi" which competed in 2010. The overall mobot course record of 33.99 seconds is held by a Michael Licitra and Jeff McMahill set in 2009.

The Kiltie Band is the concert and marching band of Carnegie Mellon University, Pittsburgh, Pennsylvania, United States. It is known for wearing kilts, in recognition of the Scottish-American ancestry of Andrew Carnegie, the founder of the university. As of 2012, the band's director is music professor Paul Gerlach.[10] The band was formed in 1908 with seven members and has grown to more than 130 members.[10] Until 1957 the band was male only, but in that year a female flutist joined and by 1961 there were eleven young women in the band.[11]