Carnegie Museum of Natural History, located at 4400 Forbes Avenue in the Oakland neighborhood of Pittsburgh, Pennsylvania, USA, was founded by the Pittsburgh-based industrialist Andrew Carnegie in 1896. It maintains a local reputation for research and is ranked among the top five natural history museums in the United States.[1] 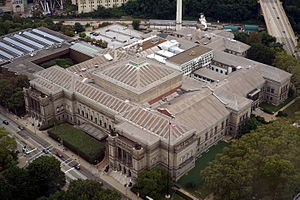 As seen from the 36th floor of the Cathedral of Learning.

The museum consists of 115,000 square feet (10,700 m2) organized into 20 galleries as well as research, library, and office space. It holds some 22 million specimens, of which about 10,000 are on view at any given time and about 1 million are cataloged in online databases. In 2008 it hosted 386,300 admissions and 63,000 school group visits. Museum education staff also actively engage in outreach by traveling to schools all around western Pennsylvania.

The museum gained prominence in 1899 when its scientists unearthed the fossils of Diplodocus carnegii.[2] Today its dinosaur collection includes the world's largest collection of Jurassic dinosaurs and its Dinosaurs in Their Time exhibition offers the third largest collection of mounted, displayed dinosaurs in the United States (behind the Smithsonian's National Museum of Natural History and the American Museum of Natural History). Notable specimens include one of the world's only fossils of a juvenile Apatosaurus, the world's first specimen of a Tyrannosaurus rex,[3] and a recently identified species of oviraptorosaur named Anzu wyliei.[4]

Other major exhibits include Hillman Hall of Minerals and Gems, Alcoa Foundation Hall of American Indians, Polar World: Wyckoff Hall of Arctic Life, Walton Hall of Ancient Egypt, Benedum Hall of Geology, Dinosaurs in Their Time, and Powdermill Nature Reserve, established by the museum in 1956 to serve as a field station for long-term studies of natural populations.