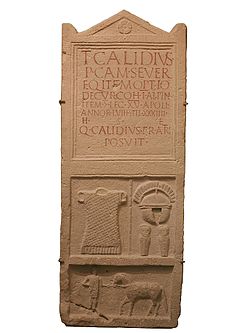 Tombstone of Titus Calidius Severus, centurion of the Fifteenth Legion, depicting a horse, centurion's helmet and armour, found in Carnuntum

Statue of the god Jupiter Dolichenus

Carnuntum (Καρνους in Ptolemy) was a Roman army camp on the Danube in the Noricum province and after the 1st century the capital of the Pannonia Superior province, with 50,000 people.[1][2] Its remains are situated in Lower Austria halfway between Vienna and Bratislava on the "Archaeological Park Carnuntum", extending over the area of 10 km² near today's villages Petronell-Carnuntum and Bad Deutsch-Altenburg.

Carnuntum originated as a Roman army camp. Its name is nearly always found with "K" on monuments and is derived from Celtic karn- ("cairn"). Its name first occurs in history during the reign of Augustus (6 AD), when Tiberius made it his base of operations in the campaigns against Maroboduus (Marbod). Significant Romanization occurred when the town was selected as the garrison of the Legio XV Apollinaris. A few years later, it became the centre of the Roman fortifications along the Danube from Vindobona (now Vienna) to Brigetio (Ó-Szőny). Under Trajan or Hadrian, Carnuntum became the permanent quarters of Legio XIV Gemina and the capital of Pannonia Superior.

Even in Roman times it had a history as a major trading center for amber, brought from the north to traders who sold it in Italy; the main arm of the Amber Road crossed the Danube at Carnuntum. It was made a municipium by Hadrian (Aelium Carnuntum). Marcus Aurelius resided there for three years (172-175) during the war against the Marcomanni, and wrote part of his Meditations there. Septimius Severus, at the time governor of Pannonia, was proclaimed emperor there by his soldiers (193), to replace Emperor Pertinax, who had been murdered. In 308 the Emperor emeritus Diocletian chaired a historic meeting with his co-emperors Maximian and Galerius in Carnuntum to solve the rising tensions within the tetrarchy. It brought about freedom of religion for the Roman Empire. In the 4th century, it was destroyed by Germanic invaders. Although partly restored by Valentinian I, it never regained its former importance, and Vindobona became the chief military centre. During the Barbarian Invasions, Carnuntum was eventually abandoned and used as a cemetery and source of building material for building projects elsewhere. Eventually, its remains were covered by decaying plant material. In fact, the walking level is now 1.5 m higher. 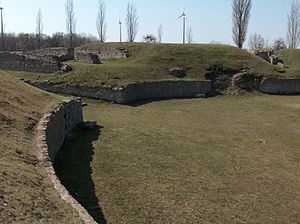 The remains of the civilian city extend around the village Petronell-Carnuntum. There are several places to see in the civilian city: Roman city quarter in the open-air museum, palace ruins, amphitheatre, and "Heidentor".

The Roman city quarter was a peripheral part of the former civilian city. The ruins are exposed in the open-air museum directly in the present village. One of the ancient houses, called the House of Lucius, has been rebuilt using traditional techniques. It was opened to the public on 1 June 2006.

The centre (forum) of the civilian city was next to the palace ruins, also referred to as the large public baths.

Some way outside the city was a large amphitheatre, which had room for about 15,000 spectators. A plate with an inscription found at the site claims that this building was the 4th largest amphitheatre in the whole Roman Empire.

Between 354 AD and 361 AD a huge triumphal monument was erected next to the camp and city. Contemporary reports suggest that Emperor Constantius II had it built to commemorate his victories. When the remains of Carnuntum disappeared after the Migration Period the monument remained as an isolated building in a natural landscape and led Medieval people to believe it was the tomb of a pagan giant. Hence, they called it "Heidentor" (pagan gate). 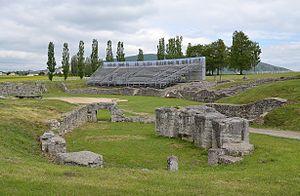 Remains of the military city - amphitheatre

The only remaining building of the military city is an amphitheatre, located just outside the fortified military camp. Today, a small adjacent museum shows the history of gladiators.

In September 2011 aerial photographs and ground-penetrating radar led to the discovery of the typical contours of an ancient Roman gladiator school to the south of the Roman settlement, a ludus rivaling the Ludus Magnus school and covering an area of some 3,350 square yards (0.280 ha).[3] This approach of aerial photography and modern remote sensing has allowed for a detailed virtual recreation of the gladiator school.[4] The aerial photographs used in the recreation were acquired with a radio-controlled Microdrone md4-1000 quadrocopter, which captured a sufficient amount of photographs to create an overlap among them. Then, using a technique called Structure from Motion (SfM), a 3D model of the school was calculated using the sharpest images.[5] The school, along with the amphitheater, was located outside of the town's walls. The school had training grounds, bathing facilities, an assembly hall and dormitories for the gladiators. The school also had a courtyard which housed a training area for gladiators. The school was attached to an open campus which was most likely used for chariot races.[6]

The archaeological museum Carnuntinum, which is situated in the village of Bad Deutsch-Altenburg on the river Danube, exhibits important archeological finds from the ancient city.

Völkisch author Guido von List was so impressed with the ruins that he based his first novel on the subject. Another novel, Household Gods, by Harry Turtledove and Judith Tarr, is set in Carnuntum during the reign of Marcus Aurelius.

In Frank Tallis' crime novel Vienna Blood both Guido von List and his novel Carnuntum appear, together with an eponymous opera based on the novel.