Carol I of Romania

From Infogalactic: the planetary knowledge core
Jump to: navigation, search
"Carol I" redirects here. For the 2009 film, see Carol I (film).

Carol I (20 April 1839 – 27 September (O.S.) / 10 October (N.S.) 1914), born Prince Karl of Hohenzollern-Sigmaringen was the ruler of Romania from 1866 to 1914. He was elected Ruling Prince (Domnitor) of the Romanian United Principalities on 20 April 1866 after the overthrow of Alexandru Ioan Cuza by a palace coup. After the defeat of the Ottoman Empire (1878) in the Russo-Turkish War, he declared Romania a sovereign nation (the country had been under the nominal suzerainty of the Ottoman Empire until then). He was proclaimed King of Romania on 26 March [O.S. 14 March] 1881. He was the first ruler of the Hohenzollern-Sigmaringen dynasty, which ruled the country until the proclamation of a republic in 1947.

During his reign, Carol I personally led Romanian troops during the Russo-Turkish War and assumed command of the Russo/Romanian army during the siege of Plevna. The country achieved full independence from the Ottoman Empire (Treaty of Berlin, 1878) and acquired Southern Dobruja from Bulgaria in 1913. Domestic political life, still dominated by the country's wealthy landowning families organized around the rival Liberal and Conservative parties, was punctuated by two widespread peasant uprisings, in Wallachia (the southern half of the country) in April 1888 and in Moldavia (the northern half) in March 1907.

He married Elisabeth of Wied in Neuwied on 15 November 1869. They only had one daughter, Maria, who died at the age of three.

Carol never produced a male heir, leaving his elder brother Leopold next in line to the throne. In October 1880 Leopold renounced his right of succession in favour of his son William, who in turn surrendered his claim six years later in favour of his younger brother, the future king Ferdinand.

Prince Karl Eitel Friedrich Zephyrinus Ludwig of Hohenzollern-Sigmaringen was born in Sigmaringen, the second son of Prince Karl Anton of Hohenzollern-Sigmaringen and his wife, Princess Josephine of Baden. After finishing his elementary studies, Karl entered the Cadet School in Münster. In 1857 he was attending the courses of the Artillery School in Berlin. Up to 1866, when he accepted the crown of Romania, he was a Prussian officer. He took part in the Second Schleswig War, including the assault of the Fredericia citadel and Dybbøl, an experience which would be very useful to him later in the Russo-Turkish war.

Although he was quite frail and not very tall, prince Karl was reported to be the perfect soldier, healthy and disciplined, and also a very good politician with liberal ideas. He was familiar with several European languages. His family being closely related to the Bonaparte family (one of his grandmothers was a Beauharnais, Joséphine's niece-in-law, and the other a Murat, Joachim's niece Marie Antoinette Murat), they enjoyed very good relations with Napoleon III of France. Romania was at the time under the influence of French culture, and Napoleon's recommendation of Prince Karl of Hohenzollern-Sigmaringen weighed heavily with Romanian politicians of the time, as did his blood relation to the ruling Prussian family. Ion Brătianu was the Romanian politician who was sent to negotiate with Karl and his family the possibility of installing him on the Romanian throne.

On the way to Romania 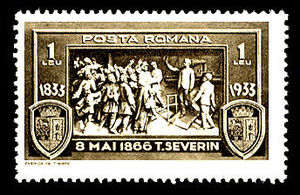 The former Romanian ruler, Alexandru Ioan Cuza, had been expelled from the country by the leading noblemen and Romania was in a political chaos. Cuza's double election, both in Wallachia and in Moldavia) had been the basis on which the Romanian Principalities' unification was recognized by the European powers. With him gone, the country was in danger of disintegration.

Due to the political conflict between Prussia and the Austrian Empire, Karl travelled incognito by railroad from Düsseldorf to Baziaș, through Switzerland. He received there a Swiss passport from a Swiss public clerk, friend of his family, under the name of Karl Hettingen. From Baziaș he travelled by boat to Turnu Severin, as there was no railroad to Romania. As he crossed the border onto Romanian soil, he was met by Brătianu, who bowed before him and asked Karl to join him in his carriage.

On 10 May 1866 (22 May 1866 N.S.), Karl entered Bucharest. The news of his arrival had been transmitted by telegraph and he was welcomed by a huge crowd eager to see the new ruler. In Băneasa he was given the keys to the capital city. Eventually it was a rainy day after a long period of drought, apparently a very favorable sign. As he was crowned, Karl swore this oath: "I swear to guard the laws of Romania, to maintain the rights of its People and the integrity of its territory." He spoke in French, as he did not speak Romanian. However, he endeared himself to his adopted country by adopting the Romanian spelling of his name, Carol. 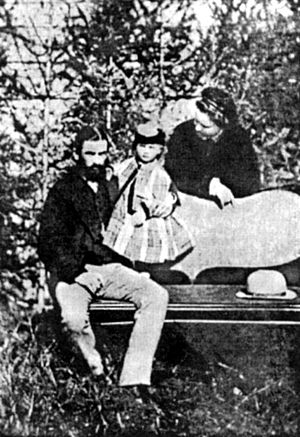 Domnitor Carol with his wife and their only daughter (1873)

Immediately after arriving in the country, the Romanian parliament adopted, on 29 June 1866, the 1866 Constitution of Romania, one of the most advanced constitutions in that time. This constitution allowed the development and modernization of the Romanian state. In a daring move, the Constitution chose to ignore the nominal suzerainty of the Ottoman Empire, which paved the way towards de jure independence.

Article 82 stated that "The ruler's powers are hereditary, starting directly from His Majesty, prince Carol I of Hohenzollern-Sigmaringen, on the male line through the right of first-born, with the exclusion of women and their issue. His Majesty's descendants will be raised in the Eastern Orthodox Religion." It, like all but one of its successors, enshrined the principle that the king reigned, but did not rule.

In 1877, Romania was proclaimed independent, ending the fiction of Ottoman suzerainty that had existed since 1866. From 1878, Carol held the title of Royal Highness (Alteță Regală). On 15 March 1881, the constitution was amended to proclaim Romania a kingdom. Carol became the first king, while the heir-apparent or heir-presumptive would be called Prince Royal. On 10 May, Carol was crowned king.

King Carol was reported to be a cold person. He was permanently concerned with the prestige of the dynasty he had founded. His wife, Elizabeth, claimed he 'wore the crown in his sleep'. He was very meticulous and he tried to impose his style upon everyone that surrounded him. Though he was devoted to his job as a Romanian prince and king, he never forgot his German roots.

In 48 years of rule—the longest in Romanian history—he helped Romania gain its independence, he raised its prestige, he helped redress its economy and he established a dynasty. In the Carpathian mountains, he built Peleș Castle, still one of Romania's most visited touristic attractions. The castle was built in German style, as a reminder of the king's origin. After the Russo-Turkish war, Romania gained Dobrogea and Carol ordered the first bridge over the Danube, between Fetești and Cernavodă, linking the newly acquired province to the rest of the country.

As a member of the German higher landed aristocracy (Fürst), Carol never managed to follow the much-needed liberal and poor-friendly policies initiated by his predecessor, Alexandru Ioan Cuza. Left unsolved, the grave social problems caused by the inequity of land ownership, ignited peasant uprisings throughout the reign of Carol I. The peasant class was suppressed during 1907 revolt, at the cost of 10,000 lives.[lower-alpha 1] [lower-alpha 2] Being under the influence of local landlords, the king failed to put together a sound administration, as envisioned by Prince Cuza.[lower-alpha 3] [lower-alpha 4]

The end of the reign

The long rule of Carol helped the quick development of the Romanian state. But, towards the end of his reign and the start of the World War I, Carol wanted to enter the war on the side of the Central Powers. However, Romanian public opinion was overwhelmingly Francophile and sided with the Triple Entente. Carol had signed a secret treaty in 1883 which had linked Romania with the Triple Alliance. Although the treaty was to be activated only if Russia attacked one of the signatories, Carol was convinced that the honourable thing to do was to enter the war supporting the German Empire and his cousin, Emperor William II.[5][6]

On 3 August [O.S. 21 July] 1914, an emergency meeting was held with the Crown Council, where Carol told them about the secret treaty and shared his opinion with them. However, most of the Crown Council members strongly disagreed, opting for neutrality. King Carol died in 10 October [O.S. 27 September] 1914. The new king, Ferdinand (under the influence of his wife, Marie of Edinburgh, a British princess), was more willing to listen to public opinion. 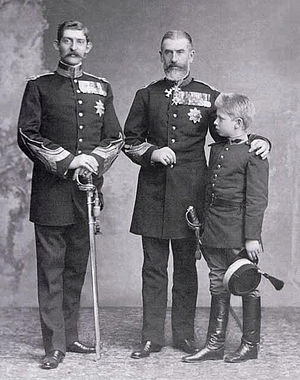 When he was elected prince of Romania, Carol was unmarried. In 1869, the prince started a trip around Europe and mainly Germany, to find a bride. During this trip he met and married Princess Elizabeth of Wied at Neuwied on 15 November 1869. Their marriage was one of the most unfit matches in history, with Carol being a cold and calculated man while Elizabeth was a notorious dreamer. They had one child, Princess Maria, born in 1871, who died 24 March 1874. She had no prospect of inheriting her father's throne; as mentioned above, the Constitution limited succession to the male line. This led to the further estrangement of the royal couple, Elizabeth never completely recovering from the trauma of losing her only child.

After the proclamation of the Kingdom (1881), the succession was a very important matter of state. Since Carol's brother, Leopold (in 1880), and his oldest son, William (in 1886), declined their rights, the second son of Leopold, Ferdinand, was named prince of Romania and heir-presumptive to the throne, in 1886.

Towards the end of Carol's life, though, Carol and Elizabeth finally found a way to understand each other and were reported to have become good friends.