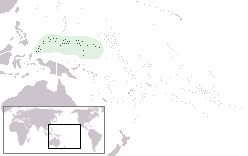 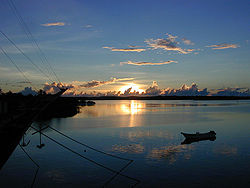 Sunset at Colonia on Yap

The Caroline Islands (Islas Carolinas in Spanish, Karolinen in German) are a widely scattered archipelago of tiny islands in the western Pacific Ocean, to the north of New Guinea. Politically they are divided between the Federated States of Micronesia in the eastern part of the group, and Palau at the extreme western end. Historically, this area was also called Nuevas Filipinas or New Philippines[1] as they were part of the Spanish East Indies and governed from Manila in the Philippines.

The group consists of about 500 small coral islands, east of the Philippines, in the Pacific Ocean; the distance from Manila to Yap, one of the larger islands of the group, is 1,200 miles (1,900 km).

Most of the islands comprise low, flat coral atolls, but some rise high above sea level.

The native inhabitants speak a variety of Micronesian languages including Pohnpeian, Chuukese, Carolinian, Yapese, and Kosraean, as well as the Western Malayo-Polynesian language Palauan. Other significant populations include Filipinos and Japanese.

The natives live mainly on horticulture and fishing, also supplementing their diet with many different varieties of bananas and taro, either of the "swamp" or "purple" varieties. On some islands housing continues to be built with local materials including coconut thatch. The language spoken in commerce is English, but there are several indigenous languages. They traditionally believe in a Supreme Being (Yalafar) and in a bad spirit (Can), yet they have hardly any religious rites. Due to extensive missionary work, Christianity is the primary religion practiced in this region of Micronesia.

Master Micronesian Navigator Mau Piailug was from the Carolinian island of Satawal. He learned the traditional navigation techniques of the Weriyeng school. These techniques had been preserved while similar techniques had been forgotten elsewhere partly due to the remoteness of the Carolinian Islands. In the 1970s Mau shared his knowledge with the Polynesian Voyaging Society which led to a revival of traditional Polynesian navigation and a new anthropological understanding of the history of Polynesian and Micronesian peoples.

In 1985 a study was made of the origin of the sidereal compass used in the Caroline Islands.[2]

Further information: History of the Federated States of Micronesia and History of Palau

Different islands and island groups in the Carolines passed down unique and variant oral legends recounting the origins and early histories of their peoples. On Pohnpei, for example, pre-colonial history is divided into three eras: Mwehin Kawa or Mwehin Aramas (Period of Building, or Period of Peopling, before ca. 1100); Mwehin Sau Deleur (Period of the Lord of Deleur, ca. 1100[3] to ca. 1628);[note 1] and Mwehin Nahnmwarki (Period of the Nahnmwarki, ca. 1628 to ca. 1885).[4][7] Pohnpeian legend recounts that the Saudeleur rulers, the first to bring government to Pohnpei, were of foreign origin. The Saudeleur centralized form of absolute rule is characterized in Pohnpeian legend as becoming increasingly oppressive over several generations. Arbitrary and onerous demands, as well as a reputation for offending Pohnpeian deities, sowed resentment among Pohnpeians. The Saudeleur Dynasty ended with the invasion of Isokelekel, another semi-mythical foreigner, who replaced the Saudeleur rule with the more decentralized nahnmwarki system in existence today.[9][10][11]

From the Moluccas (via Celebes), and carried eastward by a storm, Portuguese navigators Diogo da Rocha and his pilot Gomes de Sequeira reached some islands of the Carolines in mid-1525, staying there until January 20, 1526.[12] The Spanish arrived on August 22 of 1526, by the Spanish explorers Toribio Alonso de Salazar and Diego de Saavedra, sighting the Island of San Bartolomé or Taongui. On 1 January 1528 the discoverer Álvaro de Saavedra took possession on behalf of the King of Spain of the Uluti Islands, being visited the archipelago in 1542 (Matelotes Islands), 1543, 1545 and by Miguel Lopez de Legazpi in 1565.

Under the name Islas de las Hermanas, Hombres Pintados and Los Jardines were known but were lost news of them until Francisco de Lezcano in 1686 came to Yap and called Carolinas, in honor of the king Carlos II of Spain, being extensible the name to the Palau islands and which were renamed Gilbert Islands and Marshall Islands by British explorers of the same name who visited between 1788 the firsts and 1799, the seconds.

The colonization of the Caroline Islands clothed, as in most of the Spanish companies, a marked religious character. Granted authorization for the sending of missionaries by royal decree of October 19, 1707, were made several expeditions to the Caroline Islands. One was made by the father Cantova, who was killed. After this event until 1787, ceased the relations of Spain with the Caroline Islands. Relations were resumed later, but this time with a distinctly commercial.[13]

In 1852 the Spanish colonel Coello said to his government the advantages that the effective occupation of the Caroline Islands provide to trade of Philippines with Australia, New Guinea and the Americas , but Spain ignored his suggestions until 1885. The year in that the Spanish representative Butron signed with the kings of Koror and Artingal an act by which was recognized the sovereignty of the king of Spain on Carolines. Once secured the territory, Spain attempted to establish custom duties in the region in 1875, but Germany and United Kingdom protested because the previous abandonment of the islands by Spain allowed the arrival of different missions of the two countries. The conflict arose because of these facts was submitted to arbitration by the Pope Leon XIII, who recognized the priority of the rights of Spain on the islands fall to 164 degree east longitude. Assigning to Germany the Marshall Islands and the right to maintain a naval station in one of the Caroline Islands, a right that Germany never used[14]

Spanish-Caroline currency used in 1899 in the Caroline Islands. Is appreciated the mark of a circular punch.

After the Spanish–American War of 1898, the Carolines and Marianas islands were sold to Germany in 1899 in the German–Spanish Treaty (1899) by 25 million pesetas or respectively 17 million goldmark (nearly 1,000,000 pounds sterling) in 1899, reserving Spain the right to establish a coal deposit in the area, which administered them as Karolinen, administratively associated with German New Guinea.

Japan occupied the islands in 1914, fighting Germany . This occupation was carried out by two naval squadrons: the Western Carolines under that commanded by Rear Admiral Matsumura Tatsuo (1868–1832), and the Eastern Carolines under Vice-Admiral Yamaya Tanin (1866–1940). After the conclusion of World War I, Japan received a League of Nations mandate over the Caroline and Marshall Islands in 1920. During World War II, Japan had a large base set up at Truk Lagoon which was used for expansion into the south-eastern Pacific. In the latter years of the year, during its withdrawal towards the Japanese home islands, the Allies effectively neutralized Truk in Operation Hailstone. After the war, the islands (together with the Marshall Islands) became trust territories of the United States, with the Federated States of Micronesia gaining independence in 1986, followed by Palau in 1994.

Transfer of sovereignty at Yap in the Western Caroline Islands (1899)

In the Eastern Caroline islands (Ponape, and including the Marshall Islands from 1911)

Two Jesuits, Juan Antonio Cantova (also known as John Anthony Cantova) and Victor Walter, attempted missionary work there in 1731; the former was soon murdered, the latter obliged to flee. Two other Jesuits were killed later. In 1767 the Jesuits were suppressed in the Spanish dominions, and during the next 120 years there is no trace of a missionary.

The controversy between Germany and Spain concerning the possession of the Carolines having been settled by Pope Leo XIII in favour of Spain, the king directed Spanish Capuchins to the islands, 15 March 1886, and the Propaganda Fide officially established that mission, 15 May 1886, dividing it into two sections, named West and East Carolines respectively. Until then the islands had belonged ecclesiastically to the Vicariate Apostolic of Micronesia. The Spanish Capuchins had a catechism and prayer book printed in the Ponape dialect, and Father Anthony of Valentia wrote a small grammar and dictionary of the Yap dialect in 1890.

When the Spanish Fathers had laid the foundations of the mission, these islands passed by purchase into the hands of Germany in 1899. Spain had contributed more than $5000 a year towards the mission; Germany granted no support. Spain had compelled the aborigines to send their children to school; Germany gave full liberty in this regard, and the people consequently began to neglect school as well as church. The mission thereby suffered greatly, and the Propaganda Fide finally deemed it advisable to replace the Spanish Capuchins with others of German nationality (7 November 1904) and to erect one Apostolic prefecture instead of the two separate missions (18 December 1905). The Very Reverend Father Venantius of Prechtal, Germany was appointed first prefect Apostolic.

In 1906 twelve fathers and twelve brothers were working in thirteen stations, and several Sisters of St. Francis left Luxembourg to take charge of the ten schools, in which were 262 children. Ninety adult converts were the "harvest" of that year, and the Catholic population is given as 1900 among 11,600 unconverted natives and a few Protestants. The United States Government sent, 1 July 1905, a Jesuit from the observatory at Manila to erect a meteorological station on the island of Yap, of which station the Capuchin Father Callistus was appointed director. The origin of the East-Asiatic typhoons had been traced to these regions, and twice a day observations are made, and notice is frequently given to Manila by cable. 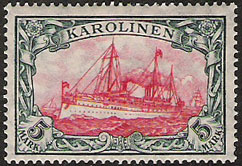 During the period of German control, Germany issued postage stamps for the islands; see postage stamps and postal history of the Caroline Islands for more details.