Caroline Patricia Lucas (born 9 December 1960) is a English politician and member of the Green Party of England and Wales who has been the Member of Parliament (MP) for Brighton Pavilion since the 2010 general election, when she became the UK's first Green Party MP. She was re-elected in the 2015 general election with an increased majority.

She is known as a campaigner and writer on green economics, localisation, alternatives to globalisation, trade justice, animal welfare and food. In her time as a politician and activist, she has worked with non-governmental organizations (NGOs) and think-tanks, including the Royal Society for the Prevention of Cruelty to Animals (RSPCA), the Campaign for Nuclear Disarmament (CND) and Oxfam.

Lucas was born in Malvern in Worcestershire, to middle-class, Conservative parents[3] Peter and Valerie Lucas.[4] She is one of three children; her father ran a small central heating company, and sold solar panelling.[5][6]

Lucas was educated at Malvern Girls' College (which became Malvern St James in 2006), an independent school in Great Malvern. She then went to the University of Exeter, where she gained a first-class BA (Hons) in English Literature, graduating in 1983.[3][7] While there, she went on many trips to Greenham Common Women's Peace Camp and Molesworth peace camp when involved with the Campaign for Nuclear Disarmament (CND). Lucas was an activist in CND and was involved in the Snowball Campaign against US military bases in the UK which involved the cutting of fences with the expectation of being arrested.[8]

She won a scholarship at the University of Kansas between 1983 and 1984, then gained a Diploma of Journalism,[5] before studying a PhD in English from the University of Exeter (awarded 1990)[9] with a thesis entitled Writing for Women: a study of woman as reader in Elizabethan romance.[10] After her doctorate, Lucas worked as a press officer for Oxfam from 1989.[6] She then worked as Asia Desk Communications Officer (1991–94), Policy Adviser on Trade and the Environment (1994–97) and Team Leader for Trade and Investment (1998–99).[citation needed] She left Oxfam in 1999.[6]

After being "utterly inspired" by Jonathon Porritt's book Seeing Green, Lucas joined the Green Party in 1986. She recalled in 2007: "I thought, right! I'm going there now" to the Green's main office on Clapham High Street, near where she lived. "I'm just going to dedicate the rest of my life to this party".[8] Soon afterwards she became the party's National Press Officer (1987–89) and Co-Chair (1989–90).[11] When the Green Party became three separate parties in 1990 for the constituent parts of the United Kingdom, she joined the Green Party of England and Wales. Lucas served as their General Election Speaker from 1991 (for the following year's general election) and a Regional Council Member from 1997.[12]

Lucas's first success in an election came when she gained the Green Party's second council seat in the UK on Oxfordshire County Council, which she held between 1993 and 1997.[13]

Lucas was first elected as a Member of the European Parliament for the South East England Region at the 1999 elections, the first year the election was by proportional representation. In that year the Green Party gained 7.4% of the vote (110,571 votes). She was re-elected in 2004, gaining 173,351 votes (8% share), and again in the 2009 election when the party's vote under the list system rose to 271,506, or 11.6%.[14] In the European Parliament, she was a member of the Committee for Trade, Industry, Energy and Research; the Committee on the Environment, Public Health and Consumer Policy;[13] the Committee on International Trade; and the Temporary Committee on Climate Change.[10]

Lucas was an early signatory of the International Simultaneous Policy (SIMPOL) which seeks to end the usual deadlock in tackling global issues. Lucas became a signatory in June 2004.[15] In addition, she is or has been Vice-President of the Animal Welfare Intergroup, a member of Intergroups on Peace Issues and Consumer Affairs, a member of the Parliament's Delegation to ACP (African Caribbean, and Pacific) Countries,[13] and a member of the Delegation for Relations with the Palestinian Legislative Council.[10] As part of her committee work, she was the Parliament's Rapporteur (draftsperson) on a Commission Communication on the impact of air transport on the environment, and the Vice-President of the parliament's committee of inquiry into foot-and-mouth disease.[13] 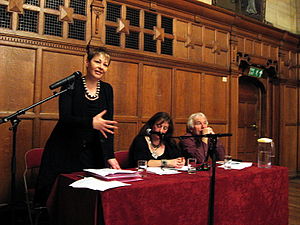 Caroline Lucas speaking about the Green New Deal in Oxford, in 2009

In July 2008, Lucas joined the Green New Deal Group, an alliance of experts in finance, energy and the environment. The group put forward plans to invest in green energy, provide greater regulation of the finance sector, and strengthen ties between environmentalists, industry, agriculture, and trade unions. The proposals were put forth in response to fears over the recession, climate change, and increasing energy prices, and stressed the need for integrative policies towards tackling all three.[16]

In July 2010, Lucas expressed her support for seven campaigners of the Smash EDO campaign who had caused approximately £180,000 damage to an EDO MBM arms factory and were acquitted of conspiring to cause criminal damage. The jury accepted their defence of lawful excuse – action undertaken to prevent a much worse crime – because the company manufactured and sold certain components used by the Israeli military, notably in its assault on Gaza. Lucas stated that: "I am absolutely delighted the jury has recognised that the actions of the decommissioners were a legitimate response to the atrocities being committed in Gaza. I do not advocate non-violent direct action lightly ... [but] their actions were driven by the responsibility to prevent further suffering in Gaza."[17]

On 14 May 2012, Lucas announced she would be standing down as leader as of September 2012 "in order to broaden opportunities for the range of talent in the party and to raise the profiles of others aspiring to election". She added "I'm proud that during the four years of my term, we've moved Green politics forward to a higher level, with the party by far the most influential it has ever been".[18]

Brighton Pavilion had the highest vote in the 2005 general election for a Green Party candidate when Keith Taylor, a former Green Party Principal Speaker, gained 22% of the vote. In 2007, Lucas declared her intention to stand for the Green Party's nomination for the prospective parliamentary candidate in the Brighton Pavilion constituency for the next general election. In a letter to party members, Lucas made it clear that she would only stand if she won the internal party selection election by more than 10%, to avoid internal division. She described the move as "the most difficult decision of my life", due to "personal and family commitments" but also her "loyalty and commitment to Keith Taylor, who is a person and a politician for whom I have great admiration and respect".[19] On 18 July 2007, it was announced that Lucas had been selected by the Brighton Green Party. Lucas won with 55% of the party ballot against Keith Taylor's 45%.[2]

Lucas opposed the presentation of bare breasted models on page 3 in The Sun and in 2013 was reprimanded for transgressing the Westminster dress code by wearing a T-shirt with the logo "No More Page Three" to protest against the feature during a Commons debate.[20]

On 19 August 2013, Lucas was arrested at a nonviolent protest against Cuadrilla Resources fracking operations in Sussex.[21] She was subsequently charged with obstructing a public highway but was found not guilty on 17 April 2014 at Brighton Magistrates' Court. After the hearing, Lucas said: "This judgement is right but this is not a victory or cause for celebration. We will continue to campaign to end fracking and only celebrate when our world is on the path to a clean energy future".[22]

Other roles and writings

Lucas is vice-president of the Royal Society for the Prevention of Cruelty to Animals (RSPCA)[24] and has been on the National Council of CND since 2004.[25] She is also Vice Chair of the All Party Parliamentary Group on Peak Oil and Gas.[26] A former vice-president of the Stop the War Coalition, she resigned from the post in December 2015.[27] According to a statement from Lucas's office, her "busy parliamentary and constituency schedule means that she doesn’t have time to fully engage with the role of a patron and, in light of some recent StWC positions that she didn’t support, she felt standing down was the responsible thing to do".[28]

She has been an Advisory Board Member to the International Forum on Globalisation, the Centre for a Social Europe[10] and the Protect the Local, Globally think-tank.[29] She has been a Trustee of the Radiation Research Trust and Patron of the Joliba Trust (Africa). She is Matron of the Women's Environmental Network. Between 1997 and 1998, she was called upon as a Policy Adviser on Trade and Investment for the UK government's Department for International Development.[10]

Lucas is a prolific writer of reports, articles and books on the subjects of trade justice, localisation, globalisation, animal welfare and food, in which she is critical of free trade, a Single European Currency, trade-led developmental policies, genetically modified (GM) food and a lack of attention to environmental and social issues.[29] Her most substantial work is Green Alternatives to Globalisation: A Manifesto (co-authored with Mike Woodin), which advocates localisation of economies based on minimal trade and greater social and environmental concern, in opposition to neo-liberal, market-led forces of globalisation.[30]

In early 2013, Lucas co-signed a letter which was published in The Guardian newspaper which officially marked her support for the People's Assembly movement.[31] She also gave a speech at the People's Assembly Conference, held at Westminster Central Hall on 22 June 2013. A book by Lucas on her time in parliament, Honourable Friends: Parliament and the Fight for Change, was published in 2015.[32]

Caroline Lucas speaking as the first Leader of the Green Party of England and Wales at its autumn conference in 2008.

In her time as a politician and activist, Lucas has won the 2006 Michael Kay Award "for her outstanding contribution to European animal welfare" from the RSPCA.[33] 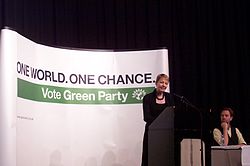 Caroline Lucas keynote speech at the autumn conference of the Green Party of England and Wales with Councillor Rupert Read looking on, Hove, 2006-09-23