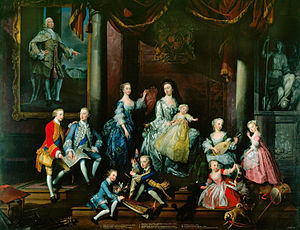 Caroline Matilda was the youngest child of Frederick, Prince of Wales, and Princess Augusta of Saxe-Gotha. Her father died suddenly about three months before her birth. She was born at Leicester House in London, and was given the style and title HRH Princess Caroline Matilda,[lower-roman 1] as daughter of the Prince of Wales, though, by the time of her birth, the title of Prince of Wales had passed to her brother George (who became George III in 1761). Both of her names were used due to her aunt, Princess Caroline, being alive. The princess was christened ten days later, at the same house, by The Bishop of Norwich, Thomas Hayter. Her godparents were her brother George, her paternal aunt Caroline and her sister Augusta.[2] She was brought up by her strict mother away from the English court and was described as natural and informal; she enjoyed out-doors life and riding. She could speak Italian, French and German, and was described as an accomplished singer with a beautiful voice.

In 1764, negotiations were made between the British and Danish royal houses of a marriage between the Danish heir to the throne and a British princess. The marriage was considered suitable in status and welcomed by both houses, as there were few Royal Protestant houses to choose between at that point for either party. The preferred choice for a bride was initially Princess Louisa, but after the Danish representative in London, Count von Bothmer, was informed of her weak constitution, her two years younger sister Caroline Matilda was chosen for the match instead.[3] The marriage was announced in Great Britain 10 January 1765.[4]

At the age of fifteen, Caroline Matilda left her family behind in Britain in order to travel to Denmark and marry her cousin, Christian VII of Denmark. The wedding took place on 8 November 1766 at Christiansborg Palace in Copenhagen. Her eldest brother, by then King George III, was anxious about the marriage, even though he was not fully aware that the bridegroom was mentally ill.

Caroline Matilda had two children, both of whom were officially recognized as the issue of Christian VII: 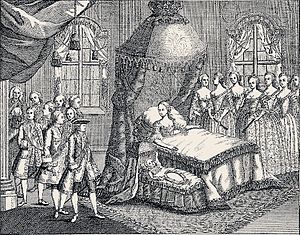 Caroline Matilda was described as vivid and charming. Although not called a beauty, she was regarded as attractive; it was said that her appearance was able to attract the attention of men without the criticism of women. However, her natural and unaffected personality was not popular at the strict Danish court. She was close to her first lady-in-waiting, Louise von Plessen, who regarded the king's friends as immoral and acted to isolate Caroline Matilda from her husband. This was not difficult as her husband did not like her.

The Danish king was persuaded to consummate the marriage for the sake of the succession, and after a son was born, he turned his interest to courtesan Støvlet-Cathrine, with whom he visited the brothels of Copenhagen. Caroline Matilda was unhappy in her marriage, neglected and spurned by the king. When Plessen was exiled from court in 1768, she lost her closest confidante, leaving her even more isolated.

In May 1768 Christian VII took his long tour of Europe, including stays in Altona, Paris and London. During his absence, Caroline Matilda aroused attention when she took walks in Copenhagen; this was considered scandalous, as royal and noble Danish women normally only travelled by carriage in town. Caroline Matilda spent the summer at Frederiksborg Castle with her new child before returning to Copenhagen in the autumn. 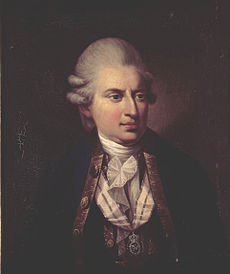 The king returned to Copenhagen on 12 January 1769, bringing with him Johann Friedrich Struensee as royal physician, who would later also become a minister in his court. He had met Struensee in Altona during the beginning of his travels. Struensee could apparently handle the king's instability, which was a great relief to the king's advisers, and the king developed a confidence in him.

Struensee encouraged the king to improve his relationship with Caroline Matilda, and Christian VII showed his attention to her in the form of a three-day birthday party on 22 July 1769. The Queen was well aware that Struensee was behind these improvements, and her interest in the charming doctor developed. In January 1770 he was given his own bedroom in the royal palace, and by spring 1770 he was her lover. A successful vaccination of the baby crown prince in May still further increased his influence.

In 1770, the king became more and more isolated and less counted upon as his mental health deteriorated; Caroline Matilda, until now ignored at court, became the centre of the royal court's attention, and gathered followers called “Dronningens Parti” (in English: "The Queen's Party"). Christine Sophie von Gähler and Margrethe von der Lühe are mentioned as her friends from this time. She gained a new confidence and showed herself in public on horse-back dressed as a man.

Supported by the queen's new informal power position at court, Struensee ruled through the king. On 15 September 1770 the King dismissed Bernstorff, and two days later Struensee became maître des requêtes (privy counsellor), consolidating his power and starting the 16-month period generally referred to as the "Time of Struensee". When, in the course of the year, the king sank into a condition of mental torpor, Struensee's authority became paramount, and he held absolute sway for ten months, between 20 March 1771 and 16 January 1772.

During this time he issued no fewer than 1069 cabinet orders, or more than three a day. For this reason, he has been criticized for having an imprudent "mania" for reform. Other criticisms of Struensee are that he did not respect native Danish and Norwegian customs, seeing them as prejudices and wanting to eliminate them in favour of abstract principles.

Nor were Struensee's relations with the queen less offensive to a nation which had a traditional veneration for the royal House of Oldenburg, while Caroline Matilda's conduct in public brought the Crown into contempt. Her way of openly demonstrating her new happiness, and riding in public dressed as a man, was seen as shocking. On the birthday of the king in 1771 she founded the order called Mathildeordenen.

On 17 June 1771 the royal court took summer residence at Hirschholm Palace in present-day Hørsholm municipality. Here, she lived happily with her child and her lover and was painted in the style of the newly modern country life; this summer is described as an idyll. On 7 July 1771, Caroline Matilda gave birth to her second child, Princess Louise Auguste, whose father was almost certainly Struensee. This was also considered scandalous; the girl was called “la petite Struensee”, though officially accepted as princess.

The court moved to Frederiksberg Palace on 19 November and then back to Christiansborg Castle on 8 January 1772.

Struensee and Caroline Matilda were both arrested in the middle of the night between 16 and 17 January, after a masked ball at the royal theatre at Christiansborg Castle. Caroline Matilda was taken to Kronborg Castle to await her judgment. She was allowed to keep her daughter with her, while 4 year old Crown Prince Frederik stayed with his father. She is believed to have been pressed or manipulated to admit the relationship by the interrogator. She was not given any advisers. She initially denied her relationship to Struensee in the hope of saving him.

The marriage of Caroline Matilda and Christian was dissolved by divorce in April 1772. After the divorce, Johann Friedrich Struensee and his accomplice Count Enevold Brandt were executed on 28 April 1772.

Caroline Matilda's brother, George III, sent Sir Robert Murray Keith, a British diplomat, to negotiate her release from imprisonment.[5] On 28 May 1772, Caroline Matilda was deported on board a British frigate to Celle, residing at Celle Castle in her brother's German territory of Hanover. She never saw her children again. In Celle, she was known for her charity toward poor children and orphans. She was also reunited with her former hofmesterinde (Mistress of the Robes) Countess Louise von Plessen.

In 1774, she became the center of a plot with the intent to make her the regent of Denmark as the guardian of the crown prince, instigated by Ernst Schimmelmann with the Englishman Nathaniel Wraxall as a messenger. Wraxall met her many times and she used him as messenger to her brother, whose support she desired. She herself wrote a letter to her brother George III in 1775, in which she asked for his approval for the plan, which she referred to as “this scheme for my son's happiness.”

She died suddenly of scarlet fever at Celle on 10 May 1775 at the age of 23. She was buried in the Stadtkirche St. Marien in Celle.