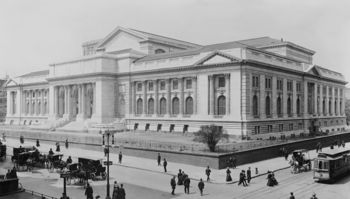 Carrère and Hastings, the firm of John Merven Carrère (November 9, 1858 – March 1, 1911) and Thomas Hastings (March 11, 1860 – October 23, 1929), was one of the outstanding Beaux-Arts architecture firms in the United States. It was located in New York City. The partnership operated from 1885 until 1911, when Carrère was killed in an automobile accident. Thomas Hastings continued on his own, using the same firm name, until his death in 1929.

Both men studied at the École nationale supérieure des Beaux-Arts and worked at the firm of McKim, Mead, and White before they established their firm in the same building. The partnership's first success was the Ponce de León Hotel in St. Augustine, Florida, which they designed for Henry Flagler. They went on to establish a successful practice during the 1880s and early 1890s, and rose to national prominence by winning the competition for the New York Public Library in 1897. The firm designed commercial buildings, elaborate residences, and prominent public buildings in New York, Washington and as far afield as Toronto, London, Paris, Rome, and Havana.

John Merven Carrère was born in Rio de Janeiro, Brazil, the son of John Merven Carrère, a Baltimore native and Anna Louisa Maxwell, a Scots/Brazilian native of Rio who was the daughter of Joseph Maxwell, a prosperous coffee trader. The architect's father entered Maxwell's coffee business and later developed other business interests of his own in Brazil. As a boy Carrère was sent to Switzerland for his education until 1880, when he entered the École nationale supérieure des Beaux-Arts, Paris, where he was in the atelier of Leon Ginian until 1882. He returned to New York where his family had resettled after leaving Brazil and worked as draughtsmen for the architectural firm of McKim, Mead and White. He and his Paris acquaintance, Thomas Hastings, worked there together before striking out on their own in 1885. During this period Carrère independently designed several circular panorama buildings in New York and Chicago. After he married Marion Dell in 1886 they lived in Staten Island and had three daughters, one of whom died as an infant. In 1901 they moved to East 65th Street in Manhattan, and built a country house in Harrison, New York.

Carrère was noted for his generous enthusiasm and his unflinching honesty. His organizational skill, artistic judgment, and energy were essential to the establishment and success of the Carrère and Hastings firm. He was most active in the firm's large civic and commercial projects, including the House and Senate office buildings on Capitol Hill, the Manhattan Bridge and its approaches, and the New York Public Library. He was interested in civic affairs in New York, where, with the help of Elihu Root, he was instrumental in establishing the Art Commission of New York City. Later his public service extended to the national arena. In the 1890s he worked with other leaders of the American Institute of Architects to persuade the US Treasury Department to implement the Tarnsey Act, which had been passed by Congress in 1893 to allow the federal government to award architectural commissions for its buildings through open design competitions. During the extended Tarnsey controversy Jeremiah O'Rourke, the Supervising Architect of the Treasury Department resigned, and Carrère was offered his job, an offer which he very publicly considered, but ultimately declined, writing, "the system, not the man, should be changed."

Carrère was engaged in the development of city planning in the United States. He wrote pamphlets and lectured at universities and to civic groups on the subject. He collaborated with Daniel H. Burnham and Arnold Brunner on the Group Plan for Cleveland, Ohio (1903), and again with Brunner on a plan for Grand Rapids, Michigan (1909). Then, in 1910, he worked with Brunner and Frederick Law Olmsted, Jr. on a plan for a Baltimore civic center (1910). In 1908, Carrère was elected into the National Academy of Design as an Associate member, and became a full member in 1910. Later, Carrère and Hastings produced a plan for the City of Hartford, Connecticut, which was completed in 1911, just prior to his tragic, early death, which occurred when a streetcar collided with the taxi in which he was riding. He suffered a brain concussion and never regained consciousness.

Thomas S. Hastings was born in New York City on March 11, 1860. His father, also Thomas S. Hastings (1827–1911), was a noted Presbyterian minister, homiletics professor, and dean of the Union Theological Seminary. His grandfather, Thomas Samuel Hastings (1784–1872), was one of America's leading church musicians of the 19th century: he composed hymns, including 'Rock of Ages,' and published the first musical treatise by a native-born composer in 1822. Hastings was educated in private schools in New York, and began his architectural apprenticeship at Herter Brothers, the premier New York furnishers and decorators. He attended the École nationale supérieure des Beaux-Arts in Paris from 1880–1883 as a student in the atelier of Jules André. There he met his future partner, and both maintained ties to Europe throughout their lives (Hastings earning the French Legion of Honor as well as the Gold Medal of the RIBA).

File:Carrere and Hastings workshop1.jpeg
Architects at work at Carrère and Hastings studio, 1905, with a model of the New York Public Library Main Branch, designed by the firm, behind them

Upon returning to New York, Hastings entered the office of McKim, Mead & White, the leading American firm of the American Renaissance. Renewing his friendship with Carrère, who was also in the office, he remained there for two years. A referral through his father to Henry Morrison Flagler resulted in the commission first for a library extension to Flagler's Mamaroneck estate and then for the Ponce de Leon and later Alcazar hotels in St. Augustine, Florida. Further ties to wealthy patrons, who were also members of his father's mid-town congregation, propelled the rapid success of the young architects. His brother Frank's ties to E. C. Benedict, a leading financier, introduced him not only to patrons but also to his future wife. In 1900, at the age of 40, he married Benedict's daughter Helen at the Presbyterian church in Greenwich, Connecticut. The ceremony was attended by many of New York's wealthy citizens. Charles F. McKim was the best man, Stanford White designed the church decorations, and White's son was a page.

Hastings is credited with many of the firm's designs and, in part because he survived Carrère by eighteen years, he is the often cited as the leader of the firm. He lectured widely and wrote a number of influential articles, later collected by David Gray in his brief biography of the architect.[1] He and his wife enjoyed riding, and they built a country house in Old Westbury, Long Island. Following Carrère's death in 1911, Hastings maintained the firm's name and continued his role as principal in the firm, but shared responsibility in large commissions with trusted associates such as Richmond Shreve, Theodore Blake and others. Owen Brainard, an engineer, was a junior partner in the firm during Carrère's lifetime and continued to consult with the firm thereafter. Eventually this collaborative arrangement would result in the formation of Shreve, Lamb and Blake (later Shreve, Lamb and Harmon), the noted builders of skyscrapers.

Hastings died of complications of an appendectomy on October 23, 1929. Some of his papers were given to the American Academy of Arts & Letters, where he was a member and treasurer for many years. He was survived by his wife but left no heirs.[2]

The firm's first major commission came from a parishioner of Rev. Hastings, Henry Morrison Flagler, the Florida developer and railway tycoon, for whom the partners built the Ponce de León Hotel (1885–1888) in St. Augustine, Florida (now part of Flagler College). This was followed by the Alcazar Hotel (1887–88 now the Lightner Museum), as well as the Flagler Memorial Presbyterian Church (1887), both in St. Augustine, and a house for Henry Flagler nearby. In 1901 they designed a second house for Flagler, Whitehall, in the resort he developed, Palm Beach, Florida. Whitehall was completed in 1902. Whitehall is a Mediterranean-flavored house faced with white stucco, with palatial interiors in various styles ranged round a grand entrance hall with double staircase.

Carrère and Hastings were among the best-connected New York architects, and benefited from associations with the richest and most powerful of the city's citizens. Clients included Elihu Root, the noted attorney and cabinet secretary under Theodore Roosevelt, Edward H. Harriman, the railroad tycoon, Thomas Fortune Ryan, one of Wall Street's notorious capitalists, and several members of the Blair family of New Jersey. The early work of the firm was eclectic but always succinctly organized, an inheritance of their École des Beaux-Arts training. Following the World Columbian Exposition of 1893, and its influential classical themes, the firm's style began to exhibit modern French and Renaissance revival attributes. The attention to sculpture and surface embellishment in their work was always closely tied to the axial planning that ensured the functionality of the interior spaces and circulation. They were among the earliest users of new technologies, from structural steel to electrification, even employing passive air conditioning systems. But their major interest was in the adaptation of the classical language of architecture developed in Europe to the American scene, creating a modern American architecture out of centuries-old traditions.

One of the largest contributions of the firm was in the realm of urban design, a result of Carrère's abiding interest in the Beaux-Arts "City Beautiful" movement. An early advocate of comprehensive planning, he designed downtown plans for Baltimore, Hartford, Cleveland and Atlantic City. In collaboration with Hastings, he was largely responsible for carrying out the firm's major public commissions: the New York Public Library (1897–1912), the House and Senate Office Buildings in Washington (1908–09), the planning of the Pan-American Exposition in Buffalo (1901), the McKinley Memorial (also in Buffalo), Richmond Borough Hall on Staten Island (1904–06), and the Paterson (New Jersey) City Hall (1896). 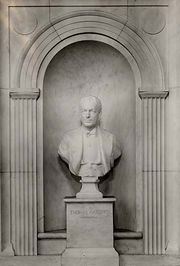 The architects were also noted for their contributions to the country house and garden movement of the early 1900s, where they introduced both stylistic and compositional ideas that shaped domestic architecture for decades to come. Their garden designs were extensively published, and they created a comprehensive staff to handle interior design in large houses, one of the first offices to offer these services. Their largest and most notable country houses included Blairsden (1898) in Peapack, New Jersey, Bellefontaine (1897, altered) in Lenox, Massachusetts, Arden (1905–09) in Harriman, New York, and Nemours (1910) in Wilmington, Delaware.

The office's significant skyscrapers were not designed until the late 1910s and early 1920s when, in association with other architects, Hastings' office worked on the Cunard Building (1917–21) and the Standard Oil Building (1920–28), which stand across the street from each other on Broadway at Bowling Green. Hastings was a critic of tall buildings in cities, warning that buildings over six stories (the height of Parisian hôtels particuliers) produced alienation by removing references to human scale, and destroyed the urban streetscape.

Changing styles and the rise of International Modernism led architectural historians to neglect the work of Carrère and Hastings for half a century after the firm closed. Today the firm is recognized as one of the most important in the U.S. during the late 19th and early 20th centuries. Their contributions to civic design and classicism are of continued importance today.