Carrboro is a town in Orange County in the U.S. state of North Carolina. The population was 19,582 at the 2010 census.[4] The town, which is part of the Raleigh-Durham-Chapel Hill metropolitan statistical area, was named after North Carolina industrialist Julian Shakespeare Carr.

The history of Carrboro is similar to the history of many mill towns in North Carolina and largely parallels the histories of the State University Railroad and the Alberta Cotton Mill. Located just west of Chapel Hill, Carrboro was originally known as West End. It was settled in 1882 near the railway depot at the terminus of the 10.2 mile State University Railroad spur from University Station in Glenn, North Carolina.[5] State statute had decreed that the railway depot be at least one mile (1.6 km) from the university campus to discourage students from leaving on the weekends and spending their money elsewhere.[6]:10 Settlement in West End increased after 1898 when Thomas F. Lloyd of Chapel Hill built a steam-powered grist mill near the depot. This would become the Alberta Cotton Mill,[7] and in 1900 the town briefly called itself Lloydville in his honor.[8]

Durham businessman Julian Shakespeare Carr bought the mill and other nearby buildings in 1909, adding them to the chain of mills that became Durham Hosiery Mills. In 1911, West End was incorporated and named Venable in honor of chemistry professor and University of North Carolina president Francis Preston Venable, but only two years later was renamed Carrboro, after Carr provided electric power for the community and expanded the mill.[7] In addition to the university and the textile mills, the railroad depot in Carrboro also served the local lumber industry, and in the 1920s and 1930s Carrboro became a major hub in the hardwood cross-tie market.[8]

A 1920s building boom in Carrboro sparked by a fire in the downtown business district ended as business at the Durham Hosiery Mills declined towards the end of the decade. The Great Depression also took an economic toll and in 1930 the company closed Mill No. 4, the original Alberta Cotton Mill. Passenger service on the train line ended in 1936. In 1938 Durham Hosiery Mills closed Mill No. 7, across Main Street from Mill No. 4, and ceased operations altogether. 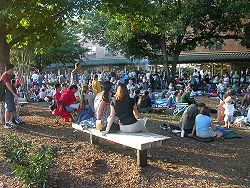 During World War II, Mill No. 7 became the site of a munitions factory. After the war, Pacific Mills bought both Mills No. 4 and 7 and operated them as Carrboro Woolen Mills. When Pacific Mills closed in the mid-1960s - the final activity at the mill was sorting and shipping BVD underwear[9] - Carrboro was no longer able to depend upon the textile industry to sustain itself. The University of North Carolina and other businesses in the area were growing rapidly and provided work in a wide range of occupations and locations.

The mill remained abandoned for nearly a decade and changed hands several times. In 1975 the owner, with the assent of the Carrboro Board of Aldermen, intended to have it demolished. A community petition and fund-raising effort provided for its restoration as Carr Mill Mall.[7]

In addition to the Alberta Mill Complex, the Carrboro Commercial Historic District, Thomas and Mary Hogan House, and Thomas F. Lloyd Historic District are listed on the National Register of Historic Places.[10]

There were 8,625 households, out of which 26.2% had children under the age of 18 living with them. 34.5% of all households were headed by married couples living together, 8.8% had a female householder with no husband present, and 53.4% were non-families. 35.5% of all households were made up of individuals and 5.3% had someone living alone who was 65 years of age or older. The average household size was 2.27 and the average family size was 3.07.[15]

The accepted demonym for residents of Carrboro is "Carrbro."

In the early 1990s, a sizable influx of Latino immigrants began moving to Carrboro, attracted by jobs in the building and service trades. The Hispanic population of Carrboro increased by 936% between 1990 and 2003, to 12% of the Carrboro population.[17] As these immigrants settled in Carrboro, they brought the food and culture of their native countries to the town. Carrboro is now home to three Latino tiendas (grocery stores). Other businesses, including national grocery chains like Food Lion, adapted to the change in demographics by stocking a wider variety of Central and South American food products. 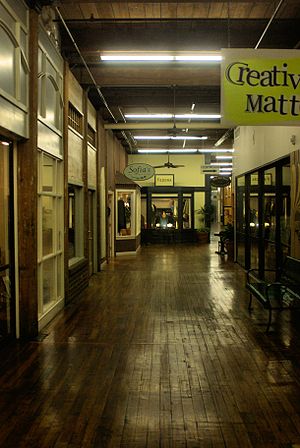 The Human Rights Center serves the Latinos, day laborers, Burmese and Karen populations. It petitioned the town government to adopt the Universal Declaration of Human Rights, which it did in 2009.

As with neighboring Chapel Hill, affordable housing has become a pressing local issue.[18]

One of Carrboro's attractions is the Carrboro Farmer's Market,[19] which features local organic produce, locally produced cheeses, baked goods, and handmade crafts. Created in 1977, the Market was one of the first in the area to link farmers directly with their customers. The Market requires that everything sold must be produced within a 50-mile (80 km) radius of Carrboro.[20] In addition to the Carrboro Farmers Market, the town eateries and specialty food shops have also garnered regional[21] and national acclaim for their strong support of locally produced food. Carrboro is a favorite destination of UNC students for its relatively large number and diversity of restaurants. In 2005, Carrboro was named one of the 100 best art towns in America.[22] 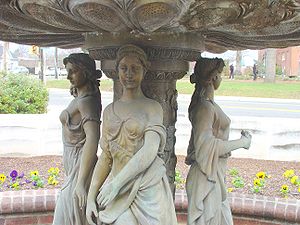 Two music venues that host national and regional acts are located in Carrboro. The Carrboro ArtsCenter has featured nationally known roots music acts, such as David Lindley, Leon Russell, and Dr. John as well as internationally known artists including Richard Thompson and k.d. lang. The ArtsCenter also holds art classes, dance classes, and art exhibitions. Not far away, the Cat's Cradle, open for more than 40 years,[23] typically hosts more rock acts than the ArtsCenter, though a number of musicians have played both venues.

The 84-seat Dirty South Institute (DSI) Comedy Theater in Carrboro, opened in 2006, boasts a local company of 50+ active performers and a national network of comedians. It is the home of the DSI Comedy School, which offers new classes to the public every month in the art of improv, stand-up and sketch comedy.[24]

The Carrboro Historic District, north of downtown, contains the distinctive architecture of the approximately 150 mill houses built by Lloyd and Carr for the mill workers at the Alberta Cotton Mill and their families. Many of these homes have since been razed, but numerous others have been restored.

The town is known for the Carrboro Music Festival, a free all-day event which celebrates local music with over 150 acts performing at dozens of locations in the downtown area. The music festival began in 1998 as the Fête de la Musique, and was held on the summer solstice. In 2002, the name of the event was changed to the Carrboro Music Festival and, in order to increase attendance by avoiding the summer heat, moved to the fall. In 2013, the festival expanded to two days. Carrboro is also home to the annual West End Poetry Festival, which draws in a great selection of local poets.[25]

Every November, Carrboro hosts its annual Film Festival. The Carrboro Film Festival was started in 2006 by Carrboro Arts Committee members Jackie Helvey and Nic Beery, with support from Board of Aldermen and the Carrboro Recreation and Parks Department. The idea behind the Carrboro Film Festival is to promote local area shorts films that are twenty minutes or less. The first year, there were nearly 100 entires. From those, a day filled with fabulous films was created, and that tradition has continued over the years. In 2013, the Festival expanded to two days, accepting submissions from across the entire state of North Carolina and beyond.[26]

Every winter, DSI hosts the North Carolina Comedy Arts Festival. Annually, the festival raises the population of Carrboro by at least 4% for improv week and generates over $150,000 in spillover spending for the downtown business community.[27]

Carrboro is also home to two branches of the Orange County Public Library System: the Carrboro Branch Library and the Carrboro Cybrary. Carrboro Branch Library is located in McDougle Elementary and Middle School. Services include a medium-sized circulating collection of books, audiobooks, movies on DVD and VHS, and music CDs; computer and Internet access; magazines; and local and national newspapers. Carrboro Cybrary is located in the Century Center in downtown Carrboro. Services include a small circulating collection of contemporary fiction, nonfiction, audiobooks, and Spanish and English language learning materials; computer, Internet, and wireless access; magazines; and local and national newspapers. Orange County residents may access these services free of charge, and nonresidents may access the computers free of charge.

Carrboro is home to some of the originators of the modern hooping movement. In 2001, Vivian Spiral[28] began hooping on the Weaver Street Market lawn during the weekly music events. Julia Hartsell[29] joined her for the 2002 music season. Jonathan Baxter,[30] founder of the HoopPath, also lives and teaches hooping in Carrboro. The first annual HoopPath Retreat was held Carrboro in 2007 and still happens there every year. The Hoop Convergence,[31] started in 2008, is also held annually in Carrboro and the surrounding area. 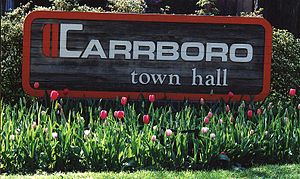 Carrboro operates under a council-manager form of government. The governing body of the town, the Board of Aldermen, consists of a mayor and six alderpersons. The mayor, who is elected every two years, presides at all meetings of the Board of Aldermen and votes on all issues to the same extent as any other member of the board. The alderpersons are elected for staggered terms of four years. All elections are at-large and nonpartisan and are decided by a simple plurality. Town operations are managed by the town manager, who is appointed by the Board of Aldermen. The town manager is David Andrews.

Carrboro is served, along with Chapel Hill, by WCHL Radio (1360 AM, 97.9 FM) and its associated web site chapelboro.com. Both communities are also served by the Chapel Hill News, a subsidiary of the Raleigh News & Observer, and the student newspaper at the University of North Carolina, The Daily Tar Heel.

In June 2004, WCOM began broadcasting at 103.5 FM in Carrboro and is streamed live over the internet at wcomfm.org. WCOM is a low-power FM (LPFM) radio station entirely volunteer-run featuring locally-produced music and community affairs programming.

The Carrboro Citizen was a locally-owned community newspaper based in Carrboro. Launched in March 2007, the Citizen was published weekly (on Thursdays) and was distributed free throughout town and the surrounding area. In 2012, the Citizen's owners sought a new owner to continue publication, but a buyer was not found. Its 290th and final issue was published October 4, 2012.

Carrboro's nickname, "The Paris of the Piedmont," stems from a sardonic comment by John Martin, a reporter for the Chapel Hill Weekly. In 1970, Nyle Frank, now a musician but then a graduate student in political science at the nearby University of North Carolina, organized an alternative "Invisible University," and announced plans to have himself crowned as the institution's "King" in Carrboro. Martin commented, "I can see it now − The Paris of the Piedmont."[35]