From Infogalactic: the planetary knowledge core
Jump to: navigation, search
This article is about anti-alcohol activist. For the opera, see Carry Nation (opera).

Carrie Amelia Moore Nation (first name also spelled Carry; November 25, 1846 – June 9, 1911) was an American woman who was a radical member of the temperance movement, which opposed alcohol before the advent of Prohibition. She is particularly noteworthy for attacking alcohol-serving establishments (most often taverns) with a hatchet.

Nation also had concerns about tight clothing for women. In fact, she refused to wear a corset and urged women not to wear them because of their harmful effects on females' vital organs.

Nation was a relatively large woman, almost 6 feet (180 cm) tall and weighing 175 pounds (79 kg). She described herself as "a bulldog running along at the feet of Jesus, barking at what He doesn't like",[2] and claimed a divine ordination to promote temperance by destroying bars.

The spelling of her first name varies; both Carrie and Carry are considered correct. Official records say Carrie, which Nation used most of her life; the name Carry was used by her father in the family Bible. Upon beginning her campaign against liquor in the early 20th century, she adopted the name Carry A. Nation, saying it meant "Carry A Nation for Prohibition".[3]

Carrie Nation was born Carrie Amelia Moore[4] in Garrard County, Kentucky, to George and Mary Campbell Moore.[5] During much of her early life her health was poor, and her family experienced financial setbacks, moving several times and finally settling in Belton, Missouri. She had poor education and informal learning. In addition to their financial difficulties, many of her family members suffered from mental illness, her mother at times having delusions.[6]

During the Civil War, the family moved several times, returning to High Grove Farm in Cass County. When the Union Army ordered them to evacuate their farm, they moved to Kansas City. Carrie nursed wounded soldiers after a raid on Independence, Missouri.

In 1865 she met a young physician who had fought for the Union by the name of Dr. Charles Gloyd, a severe alcoholic.[7] They were married on November 21, 1867, and separated shortly before the birth of their daughter, Charlien, on September 27, 1868. Gloyd died less than a year later of alcoholism, in 1869.[3] Carrie developed a very passionate attitude against alcohol. With the proceeds from selling the land her father had given her (as well as the proceeds from her husband's estate), Carrie built a small house in Holden, Missouri. She moved there with her mother-in-law and Charlien, and attended the Normal Institute in Warrensburg, Missouri, earning her teaching certificate in July 1872. She taught at a school in Holden for four years.[3] Nation obtained a history degree and studied the influence of Greek philosophers on American politics.[8]

Second marriage and 'call from God' 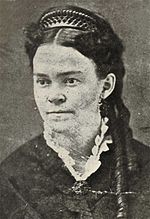 In 1874, Carrie married David A. Nation, an attorney, minister, newspaper journalist, and father, 19 years her senior.[1][9] The family purchased a 1,700 acre (690 ha) cotton plantation on the San Bernard River in Brazoria County, Texas. As neither knew much about farming, the venture was ultimately unsuccessful.[5] David Nation moved to Brazoria to practice law. In about 1880 Carrie moved to Columbia to operate the hotel owned by A. R. and Jesse W. Park. Her name is on the Columbia Methodist Church roll. She lived at the hotel with her daughter, Charlien Gloyd, "Mother Gloyd" (Carrie's first mother-in-law), and David's daughter, Lola. Her husband also operated a saddle shop just southwest of this site. The family soon moved to Richmond, Texas, to operate a hotel.[10]

David Nation became involved in the Jaybird-Woodpecker War. As a result, he was forced to move back north to Medicine Lodge, Kansas in 1889, where he found work preaching at a Christian church and Carrie ran a successful hotel. 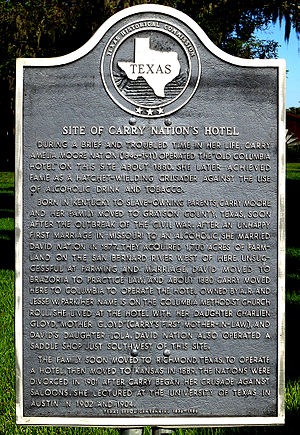 She began her temperance work in Medicine Lodge by starting a local branch of the Woman's Christian Temperance Union and campaigning for the enforcement of Kansas's ban on the sales of liquor. Her methods escalated from simple protests to serenading saloon patrons with hymns accompanied by a hand organ, to greeting bartenders with pointed remarks such as, "Good morning, destroyer of men's souls."[2] She also helped her mother and her daughter who had mental health problems.

Dissatisfied with the results of her efforts, Nation began to pray to God for direction. On June 5, 1900, she felt she received her answer in the form of a heavenly vision. As she described it:

The next morning I was awakened by a voice which seemed to me speaking in my heart, these words, "GO TO KIOWA," and my hands were lifted and thrown down and the words, "I'LL STAND BY YOU." The words, "Go to Kiowa," were spoken in a murmuring, musical tone, low and soft, but "I'll stand by you," was very clear, positive and emphatic. I was impressed with a great inspiration, the interpretation was very plain, it was this: "Take something in your hands, and throw at these places in Kiowa and smash them."[11]

Responding to the revelation, Nation gathered several rocks – "smashers", she called them – and proceeded to Dobson's Saloon on June 7. Announcing "Men, I have come to save you from a drunkard's fate", she began to destroy the saloon's stock with her cache of rocks. After she similarly destroyed two other saloons in Kiowa, a tornado hit eastern Kansas, which she took as divine approval of her actions.[2]

Nation continued her destructive ways in Kansas, her fame spreading through her growing arrest record. After she led a raid in Wichita her husband joked that she should use a hatchet next time for maximum damage. Nation replied, "That is the most sensible thing you have said since I married you."[2] The couple divorced in 1901, childless.[12]

Alone or accompanied by hymn-singing women she would march into a bar, and sing and pray while smashing bar fixtures and stock with a hatchet. Her actions often did not include other people, just herself. Between 1900 and 1910, she was arrested some 30 times for "hatchetations", as she came to call them. Nation paid her jail fines from lecture-tour fees and sales of souvenir hatchets.[14] In April 1901 Nation came to Kansas City, Missouri, a city known for its wide opposition to the temperance movement, and smashed liquor in various bars on 12th Street in Downtown Kansas City.[15] She was arrested, hauled into court and fined $500 ($13,400 in 2011 dollars),[16] although the judge suspended the fine so long as Nation never returned to Kansas City.[17] She would be arrested over 32 times—one report is that she was placed in the Washington DC poorhouse for three days for refusing to pay a $35.00 fine[18] One hotel she did not smash was the St James of Minneapolis[19]

In Amarillo, Texas, Nation received a strong response, as she was sponsored by the noted surveyor W. D. Twichell, an active Methodist layman.[20]

Saloons "visited" and Jail sentences of the "Saloon Smasher": 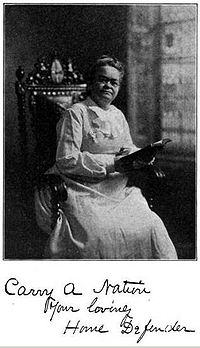 Nation's anti-alcohol activities became widely known, with the slogan "All Nations Welcome But Carrie" becoming a bar-room staple.[24] She published The Smasher's Mail, a biweekly newsletter, and The Hatchet, a newspaper. Later in life she exploited her name by appearing in vaudeville in the United States[2] and music halls in Great Britain. Nation, a proud woman more given to sermonizing than entertaining, sometimes found these poor venues for her proselytizing. One of the number of pre-World War I acts that "failed to click" with foreign audiences, Nation was struck by an egg thrown by an audience member during one 1909 music hall lecture at the Canterbury Theatre of Varieties. Indignantly, "The Anti-Souse Queen" ripped up her contract and returned to the United States.[25] Seeking profits elsewhere, Nation also sold photographs of herself, collected lecture fees, and marketed miniature souvenir hatchets.[26]

Suspicious that President William McKinley was a secret drinker, Nation applauded his 1901 assassination because drinkers "got what they deserved".[27]

Near the end of her life Nation moved to Eureka Springs, Arkansas, where she founded the home known as Hatchet Hall. Sick in mind and body, she collapsed during a speech in a Eureka Springs park.

Nation was taken to a hospital in Leavenworth, Kansas, the Evergreen Place Hospital and Sanitarium located on 25 acres at Limit Street and South Maple Avenue just outside the city limits of Leavenworth.[28] Evergreen Place Hospital was founded and operated by Dr. Charles Goddard, a professor at the University of Kansas School of Medicine and a distinguished authority on nervous and mental troubles, liquor and drug habits.[29] She died there on June 9, 1911. Both her mother and daughter were confined in mental institutions earlier in Nation's life, but her cause of death has not been linked directly to the family tendency toward mental illness (see Early Life above).

Nation was buried in an unmarked grave in Belton City Cemetery in Belton, Missouri. The Woman's Christian Temperance Union later erected a stone inscribed "Faithful to the Cause of Prohibition, She Hath Done What She Could" and the name "Carry A. Nation".[30]

Her home in Medicine Lodge, Kansas, the Carrie Nation House, was bought by the Woman's Christian Temperance Union in the 1950s and was declared a U.S. National Historic Landmark in 1976. A spring just across the street from Hatchet Hall in Eureka Springs is named after her.