Carroll County was created in 1837[3] from parts of Baltimore and Frederick Counties, see Hundred (division). It was named for Charles Carroll of Carrollton (1737–1832), signer of the American Declaration of Independence.[4]

During the American Civil War, the population of Carroll County was sharply divided between supporters of the Union and the Confederacy.[5] In 1863, there were significant troop movements through the county as part of the Gettysburg campaign. On June 29, 1863, the cavalry skirmish known as Corbit's Charge was fought in the streets of Westminster, when two companies of Delaware cavalry attacked a much larger Confederate force under General J.E.B. Stuart.

In 2013 the Carroll County Board of Commissioners voted to make English the official language of the county.[6] 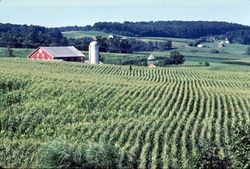 Topographically, Carroll County is located within the Piedmont Plateau region, with characteristic upland terrain of rolling hills and deciduous forest. The most prominent relief is Parr's Ridge, which bisects the county from southwest to northeast. The highest point is in the northeastern part of the county on Dug Hill along Deep Run Road.

Carroll County is bordered on the north by the Mason–Dixon line with Pennsylvania, and on the south by Howard County across the South Branch of the Patapsco River. About half of the eastern border, with Baltimore County, is formed by the North Branch of the Patapsco River and by Liberty Reservoir, though the northern half near Manchester and Hampstead is a land border. Carroll County is bordered on the west by Frederick County, across the Monocacy River and Sam's Creek. Other major streams in the county include Big Pipe Creek, Little Pipe Creek, and Double Pipe Creek, Bear Branch, and the headwaters of the Gunpowder Falls. The Piney Run Reservoir is in the southern part of the county.

The 2010 U.S. Census reported the following racial and ethnic demographic details of the county:

JoS. A. Bank Clothiers has its headquarters in an unincorporated area in the county, near Hampstead.[15][16]

The following is a list of principal employers in the county, as reported by the Maryland Department of Business and Economic Development from November 2014 data. This list excludes U.S. post offices and state and local governments, but includes public institutions of higher education.[17]

Carroll County is governed by five county commissioners, a "commission" being the traditional form of county government in Maryland.

Several times in the past, Carroll County voters have rejected charter amendments that would call for a government consisting of a County Executive and a County Council.

Carroll County differs from most counties in the Baltimore-Washington area in that it is strongly Republican. In Maryland's 2014 Gubernatorial race, Carroll County voted for Republican Larry Hogan over Democrat Lieutenant Governor Anthony Brown by 66 points 82% to 16%[18]

In 2004 Carroll County voters approved legislation that expanded the number of County Commissioners from three to five. The five Commissioners are elected from five Commissioner districts, as opposed to three Commissioners elected at-large. The change occurred with the 2010 elections, since the Maryland General Assembly did not agree on the districts in time for the 2006 elections.

Commissioners elected in 2010—all Republican[19]—were:

Supporting the commissioners is a cabinet, composed of the following departments:[26]

The Carroll County Public Schools School system is the ninth largest school district in the state of Maryland.

The newspaper of record is the Carroll County Times.

Law enforcement services for the county are provided by the Carroll County Sheriff's Office, Maryland State Police, as well as several municipalities having their own police forces. In addition to providing police services, the Sheriff's Office also acts as an agent of the courts: serving warrants, enforcing child support laws, ensuring courthouse security, transporting prisoners, etc. On October 4, 2007, the County Commissioners voted to create a police department for the county. The police department would handle primary law enforcement duties while the Sheriff's office would continue to act under the arm of the courts. This move would give the Commissioners power to appoint or fire the chief of police instead of having a popularly elected Sheriff being in charge of all law enforcement. This move falls in line with Maryland's more populated counties who have such a dual system of law enforcement (Montgomery, Anne Arundel, Prince George's, Howard and Baltimore Counties), as Carroll County has begun to have a population increase. Municipal departments, such as Westminster Police, would be unaffected by the change. [1]