From Infogalactic: the planetary knowledge core
Jump to: navigation, search
File:Carrot and stick motivation.svg
Carrot and the stick

The "carrot and stick" approach (also "carrot or stick approach") is an idiom that refers to a policy of offering a combination of rewards and punishment to induce behavior. It is named in reference to a cart driver dangling a carrot in front of a mule and holding a stick behind it. The mule would move towards the carrot because it wants the reward of food, while also moving away from the stick behind it, since it does not want the punishment of pain, thus drawing the cart.

The idiom is used in the field of International Relations to describe the realist concept of 'hard power'. The carrot can stand for tax cuts or other benefits, the stick can stand for the use of (psychological) violence and threats by the government.

In modern usage, the idea has also come to be used in a related idiom, "the carrot or the stick." This refers to the process of weighing and/or deciding whether a desired behavior would be better induced via the enticement of benefits or the threat of punishments.[1]

The earliest citation of this expression recorded by the Supplement to the Oxford English Dictionary is to The Economist magazine in the December 11, 1948, issue. 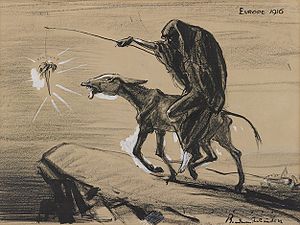 Boardman Robinson cartoon using the carrot on a stick metaphor. An anti-war cartoon, it depicts Death enticing an emaciated donkey towards a precipice with a carrot labeled "Victory."

An example of the use of this policy is Stalin's control of Eastern Europe during the period of the Cold War. He applied it among counties of the Soviet Sphere of Influence to have a tighter control on them.[citation needed]

The term was used in articles discussing the need to stimulate productivity after World War II, published in Australian newspapers in 1947 and 1948.[2][3]

Carrot on a stick is a similar, but separate, idiom. It refers to a policy of offering a reward for making progress towards benchmarks or goals but not necessarily ever actually delivering. The original metaphor referred to a boy sitting on a cart being pulled by a donkey. The boy held a long stick to which a carrot had been tied, and he dangled the carrot in front of the donkey but just out of its reach. As the donkey moved forward to get the carrot, it pulled the cart—and the boy—so that the carrot always remained just out of reach as the cart moved forward.