Carteret County is a county located in the U.S. state of North Carolina. As of the 2010 census, the population was 66,469.[1] Its county seat is Beaufort.[2] The county was created in 1722 as Carteret Precinct and gained county status in 1739.[3] It was named for Sir George Carteret, one of the 17th century English Lords Proprietor, or for his descendant and heir John Carteret, 2nd Earl Granville.

The first male of English parents born in the current area of North Carolina was John Fulford. He was born in 1629 in what is now Carteret County, North Carolina. He settled in this area and died in 1729. An article dated Sept. 18, 1893, in The New Bern Daily Journal, identified Fulford's grave in a cemetery outside Beaufort, NC, in an area called the Straits, “bricked up with English brick.” In 1971 a survey by the Carteret County Historical Society found such a grave in the Fulford Cemetery off Piper Lane in Gloucester. There is an unmarked bricked up grave matching this description today.[4] One of the more profound families from Carteret County was the Dennis family. William Dennis Sr. (b.1720 d. 1800) was an extremely colorful landowner, Revolutionary War officer and overall defender of the county of Carteret. In 1747, William Dennis assisted with the successful defense of the county during the War of Jenkins' Ear (fighting against Spanish pirates). Perhaps William Dennis' greatest contribution to Carteret County was his service during the Revolutionary War. William was promoted to Captain in the 8th North Carolina Regiment stationed at Valley Forge in November of 1777. William also participated in the Battle of Brandywine. At the ripe age of 60, William was a Major in the Carteret County Militia. In 1782, William assisted with driving the British from Carteret County alongside Col. John Easton. William was once an owner of the famous Hammock House. By the year 1790, William was shown as one of the largest land owners in the county. Branches of the Dennis family include the Bell's, Watson's and Pelletier's, many of whom continued to live in the area for many years to follow. Some branches of this family later migrated to both Mississippi and Texas.

Carteret County is a member of the regional Eastern Carolina Council of Governments. It includes 16 of North Carolina's townships.

A voting machine malfunction in the county resulted in the loss of 4,438 ballots cast during early voting for the November 2, 2004 general election.[5] Since the number of lost ballots exceeded the lead held (by Steve Troxler over Britt Cobb) in the statewide race for agriculture commissioner, the State Board of Elections decided to hold a special election on January 11, 2005, open only to the 18,500 voters in the county who either failed to vote or whose votes were lost.[6][7] Both candidates filed legal challenges contesting the format of the new election.[8] On February 4, 2005, Cobb conceded the race.[9] 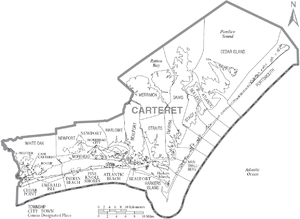