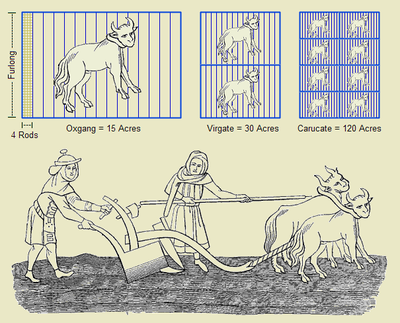 The carucate or carrucate (Medieval Latin: carrūcāta or carūcāta)[1] was a medieval unit of land area approximating the land a plough team of eight oxen could till in a single annual season. It was known by different regional names and fell under different forms of tax assessment.

The carucate was named for the carruca heavy plough that began to appear in England in the 9th century, introduced by the Scandinavians[citation needed] . It was also known as a ploughland or plough (Old English: plōgesland, "plough's land") in the Danelaw usually but not always excluded the land's suitability for winter vegetables and desirability to remain fallow in crop rotation. The tax levied on each carucate came to be known as "carucage". Though a carucate might nominally be regarded as an area of 120 acres (490,000 m²) (0.49 km²), and can usefully be equated to certain definitions of the hide, its variation over time and depending on soil and fertility makes its actual figure wildly variable.[2] The Danelaw carucates were subdivided into eighths: oxgangs or bovates based on the area a single ox could till in a year.

In the rest of England, the land was reckoned in hides which were divided into four yardlands, later known as virgates.

A ploughgate was the Scottish equivalent in the south and east of the country. Even more so than in England, the variable land quality in Scotland led to ploughgates of varying sizes, although the area was notionally understood as 100 Scots acres. Many sources say that four ploughgates made up a daugh, but in other places it would have appeared to have been the equivalent of one daugh exactly. As in the Danelaw, ploughgates were subdivided into oxgangs, again usually by eighths.