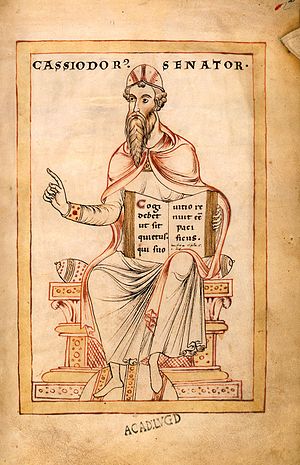 Flavius Magnus Aurelius Cassiodorus Senator (c. 485 – c. 585),[1] commonly known as Cassiodorus, was a Roman statesman and writer, serving in the administration of Theoderic the Great, king of the Ostrogoths. Senator was part of his surname, not his rank.

Cassiodorus was born at Scylletium, near Catanzaro in Calabria, southern Italy. He began his career as councillor to his father, the governor of Sicily, and while still very young, made a name for himself as learned in the law. During his working life, as quaestor sacri palatii c. 507–511, as a consul in 514, then as magister officiorum under Theoderic, and later under the regency for Theoderic's young successor, Athalaric, Cassiodorus kept copious records and letterbooks concerning public affairs. At the Gothic court his literary skill, which seems so mannered and rhetorical to modern readers, was so esteemed that when in Ravenna he was often entrusted with drafting significant public documents. His culminating appointment was as praetorian prefect for Italy, effectively the prime ministership of the Ostrogothic civil government[2] and a high honor to finish any career. Cassiodorus also collaborated with Pope Agapetus I in establishing a library of Greek and Latin texts, which were intended to support a Christian school in Rome.

[I]t is almost indisputable that he accepted advancement in 523 as the immediate successor of Boethius, who was then falling from grace after less than a year as magister officiorum, and who was sent to prison and later executed. In addition, Boethius' father-in-law (and step-father) Symmachus, by this time a distinguished elder statesman, followed Boethius to the block within a year. All this was a result of the worsening split between the ancient senatorial aristocracy centered in Rome and the adherents of Gothic rule at Ravenna. But to read Cassiodorus' Variae one would never suspect such goings-on.[citation needed]

There is no mention in Cassiodorus' selection of official correspondence of the death of Boethius.

Athalaric died in early 534, and the remainder of Cassiodorus' public career was engulfed by the Byzantine reconquest and dynastic intrigue among the Ostrogoths. His last letters were drafted in the name of Vitiges. Cassiodorus' successor was appointed from Constantinople.

Around 537-38, he left Italy for Constantinople where he remained almost two decades, concentrating on religious questions. He notably met Junillus, the quaestor of Justinian. His Constantinopolitan journey contributed to the improvement of his religious knowledge.

Cassiodorus spent his career trying to bridge the 6th century cultural divides: between East and West, Greek culture and Latin, Roman and Goth, and between an Orthodox people and their Arian ruler. He speaks fondly in his Institutiones of Dionysius Exiguus, the calculator of the Anno Domini era.

In his retirement he founded the monastery of Vivarium on his family estates on the shores of the Ionian Sea, and his writings turned to religion. 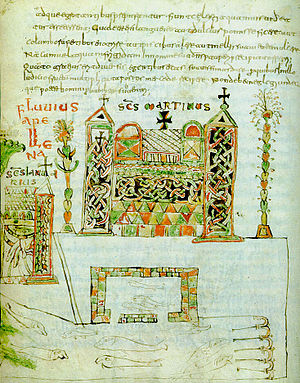 Vivarium from the Bamberg manuscript of the Institutiones Patr. 61, fol. 29v

Cassiodorus' Vivarium "monastery school"[3] was composed of two main buildings; a coenobitic monastery and a retreat, on the site of the modern Santa Maria de Vetere near Squillace, for those who desired a more solitary life. The twin structure of Vivarium was to permit coenobitic monks and hermits to coexist. The Vivarium appears not to have been governed by a strict monastic rule, such as that of the Benedictine Order. Rather Cassiodorus' Institutiones was written to guide the monks' studies. To this end, the Institutiones focuses largely on texts assumed to have been available in Vivarium's library. The Institutiones seem to have been composed over a lengthy period of time, from the 530s into the 550s, with redactions up to the time of Cassiodorus’ death. Cassiodorus composed the Institutiones as a guide for introductory learning of both “divine” and “secular” writings, in place of his formerly planned Christian school in Rome:

“I was moved by divine love to devise for you, with God’s help, these introductory books to take the place of a teacher. Through them I believe that both the textual sequence of Holy Scripture and also a compact account of secular letters may, with God’s grace, be revealed.” [4]

The first section of the Institutiones deals with Christian texts, and was intended to be used in combination with the Expositio Psalmorum. The order of subjects in the second book of the Institutiones reflected what would become the Trivium and Quadrivium of medieval liberal arts: grammar, rhetoric, dialectic; arithmetic, music, geometry, and astronomy. While he encouraged study of secular subjects, Cassiodorus clearly considered them useful primarily as aids to the study of divinity, much in the same manner as St. Augustine. Cassiodorus’ Institutiones thus attempted to provide what Cassiodorus saw as a well-rounded education necessary for a learned Christian, all in uno corpore, as Cassiodorus himself put it.[5]

In the end the library at Vivarium was dispersed and lost, though it was still active ca. 630, when the monks brought the relics of Saint Agathius from Constantinople, to whom they dedicated a spring-fed fountain shrine that still exists.[6] Despite the demise of the Vivarium, Cassiodorus’ work in compiling classical sources and presenting a sort of bibliography of resources would prove extremely influential in Late Antique Western Europe.[7]

Cassiodorus devoted much of his life to supporting education within the Christian community at large. When his proposed theological university in Rome was denied, he was forced to re-examine his entire approach to how material was learned and interpreted.[8] His Variae show that, like Augustine of Hippo, Cassiodorus viewed reading as a transformative act for the reader. It is with this in mind that he designed and mandated the course of studies at the Vivarium, which demanded an intense regimen of reading and meditation. By assigning a specific order of texts to be read, Cassiodorus hoped to create the discipline necessary within the reader to become a successful monk. The first work in this succession of texts would be the Psalms, which the untrained reader would need to begin with because of its appeal to emotion and temporal goods.[9] By examining the rate at which copies of his Psalmic commentaries were issued, it is fair to assess that as the first work in his series, Cassiodorus’s educational agenda had been implemented to some degree of success.[9]

Beyond demanding the pursuit of discipline among his students, Cassiodorus encouraged the study of the liberal arts. He believed these arts were part of the content of the Bible, and some mastery of them—especially grammar and rhetoric—necessary for a complete understanding of it.[9] These arts were divided into trivium (which included rhetoric, idioms, vocabulary and etymology) and quadrivium: arithmetic, geometry, music, and astronomy.

Cassiodorus is rivalled only by Boethius in his drive to preserve and explore classical literature during the 6th Century AD.[10][11] He found the writings of the Greeks and Romans valuable for their expression of higher truths where other arts failed.[9] Though he saw these texts as vastly inferior to the perfect word of Scripture, the truths presented in them played to Cassiodorus’s educational principles. Thus he is unafraid to cite Cicero alongside sacred text, and acknowledge the classical ideal of good lying within the practice of rhetoric.[9]

His love for classical thought also influenced his administration of Vivarium. Cassiodorus connected deeply with Christian neoplatonism, which saw beauty as concomitant with the Good. This inspired him to adjust his educational program to support the aesthetic enhancement of manuscripts within the monastery, something which had been practiced before, but not in the universality that he suggests.[12]

Classical learning would by no means replace the role of scripture within the monastery; it was intended to augment the education already under way. It is also worth noting that all Greek and Roman works were heavily screened to ensure only proper exposure to text, fitting with the rest of the structured learning.[13]

Cassiodorus’s legacy is quietly profound. Before the founding of Vivarium, the copying of manuscripts had been a task reserved for either inexperienced or physically infirm devotees, and was performed at the whim of literate monks. Through the influence of Cassiodorus, the monastic system adopted a more vigorous, widespread, and regular approach to reproducing documents within the monastery.[14] This approach to the development of the monastic lifestyle was perpetuated especially through German religious institutions.[14]

This change in daily life also became associated with a higher purpose; the process was not merely associated with disciplinary habit, but also with the preservation of history.[15] During Cassiodorus’s lifetime, theological study was on the decline and classical writings were disappearing. Even as the victorious Ostrogoth armies remained in the countryside, they continued to pillage and destroy religious relics in Italy.[10] Cassiodorus's programme helped ensure that both classical and sacred literature were preserved through the Middle Ages.

Despite his contributions to monastic order, literature, and education, Cassiodorus’ labours were not well acknowledged. After his death he is only partially recognised by historians of the age, including Bede, as an obscure supporter of the Church. Elaboration upon this is typically fraught with errors. In their description of Cassiodorus medieval scholars have been documented to change his name, profession, place of residence, and even his religion.[10] Some chapters from his works have been copied into other texts, suggesting that he may have been read, but not generally known.[13]

The works not assigned as a part of Cassiodorus’s educational program must be examined critically. Because he had been working under the newly dominant power of the Ostrogoths, the writer demonstrably alters the narrative of history for the sake of protecting himself. The same could easily be said about his ideas, which were presented as non-threatening in their approach to peaceful meditation and its institutional isolationism.[16]