From Infogalactic: the planetary knowledge core
Jump to: navigation, search
This article is about the castle official. For other uses, see Castellan (disambiguation).

A castellan was the governor or captain of a castellany and its castle.[1] The word stems from the Latin Castellanus,[2] derived from castellum "castle". Sometimes also known as a constable, governor of the castle district or captain, the Constable of the Tower of London is, in fact, a form of castellan. A castellan could be either male or female, as when, in 1194, Beatrice inherited her father's castellany of Bourbourg upon the death of her brother, Roger.[3]

After the fall of the western Roman Empire, many tribes migrated into western Europe, causing strife and war. The answer to recurrent invasion was to create fortified areas which evolved into castles. Some leaders gained control of several areas, each with a castle. The problem lay in exerting proper control and authority in each area when one can only be in one place at a time. To answer this, lords gave their trusted vassals direct control of a castle, reporting to the lord only.[4] In the ninth century, as fortifications improved and kings had difficulty making their subordinates pay their taxes or send the military aid the kings demanded, the castellans grew in power, holding their fief without much concern for their overlord's demands.[5] This changed as kings grew in power and as the Holy Roman emperors replaced recalcitrant vassals with ministerials.

Usually the duties of a castellan were combined with the duties of a majordomo. This made the castellan responsible for a castle's domestic staff and its garrison, as well as a military administrator responsible for maintaining defenses and protecting the castle's lands. This was particularly the case if there was no lord resident at the castle, or if the resident lord was frequently absent.[6] A castellan may exercise the power of the "ban" - that is, to hear court cases and collect the fines, collect taxes from residents, and muster local men for the defense[7] Castellans had both the power of low justice and high justice, which allowed them to implement up to and including the death penalty, as when, in 1111, the Salzburg castellan caught the ministerial who fomented armed rebellion, he had the offender blinded, as one would a serf.[8] At times, the castellan served as the representative of the people of his castellany, as did the castellan of Bruges, when the burghers stood up for more privileges and liberties from the counts of Flanders.[9]

One unusual responsibility in western Europe concerned jurisdiction over the resident Jewish communities near the English Channel. The Constable of the Tower of London and those castellans subordinate to the dukes of Normandy were responsible for their administration. Vivian Lipman posits four reasons for this: the castles provided defense, they were centers of administration, they were potential prisons, and possibly, as the residence of a local magnate, they could be a valuable client.[10]

In France, castellans (known in French as châtelains) who governed castles without resident nobles acquired considerable powers, and the position actually became a hereditary fiefdom. By the tenth century, the fragmentation of power became so widespread in Mâcon that the castellany was considered the basic unit of governance, without effective levels above it - the counts of Mâcon were largely ignored by their castellans from about 980 to 1030. In the 12th century castellans expanded their territories to include taking weaker castellanies under their control, as when then castellan of Beaujeu took over lands in Lyons, or when Uxelles annexed Briançon, then Sennecey-le-Grand and L'Épervieres.[11] 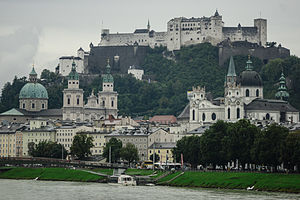 The fortress of Hohensalzburg, Austria, had a ministerial castellan

In Germany the castellan was known as a Burgmann, or sometimes Hauptmann ("captain"), who reported to the lord of the castle, often known as the burgrave (Burggraf). The burgmann may have been either a free noble or a ministerialis, but either way administered the castle as a vassal. A ministerial, being wholly indebted to a lord, was more easily controlled. Ministerials replaced free nobles as castellans of Hohensalzburg under Conrad I of Abensberg’s tenure as Archbishop of Salzburg from 1106 to 1147, starting with Henry of Seekirchen in the 1130s.[12]

At times, there was a castellan among the Officers of the Kingdom of Jerusalem, starting with Anselm (castellan, c. 1110).

In the Kingdom of Poland and later the Polish-Lithuanian Commonwealth, the castellans (Polish: Kasztelan) were in most cases lower in precedence to the voivodes (with the exception of the Burgrave of Kraków [Polish Burgrabia krakowski] who had precedence before the Voivode of Kraków). Castellans were in charge of a part of a voivodeship called the castellany (Polish Kasztelania) until the 15th-century and from that time on their domain was divided into provinces for greater castellans, and powiats for minor castellans. Castellans in the Polish–Lithuanian Commonwealth were of senator rank. 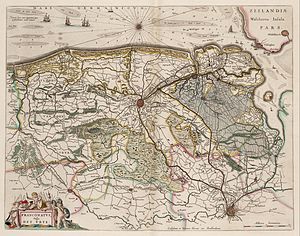 Map of the Brugse Vrije, a castellany of the County of Flanders

A castellany is a term denoting a district administered by a castellan. Castellanies appeared during the Middle Ages and in most current states are now replaced by a more modern type of country subdivision. The word is derived from castle and literally means the extent of land and jurisdiction belonging to a given castle.

It also renders equivalent, often cognate, terms in other languages. Examples of French châtelainies include the castellanies of Ivry-la-Bataille, Nonancourt, Pacy, Vernon and Gaillon, all in Normandy, which under in the treaty of Issoudun (1195, after a war with king Richard of England) were acquired for the French crown by Philip Augustus. Examples from Poland include Leczyca and Sieradz (both once a duchy), Spycimierz, Rozprza, Wolbórz and Wojnicz (in Cracow diocese) and Otmuchow in Silesia.