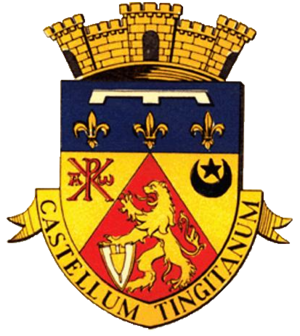 Castellum Tingitanum, also called Castellum Tingitii, was a Roman colonia in Mauretania Caesariensis, and corresponds to present-day Chlef in Algeria.

Castellum Tingitanum was located 100 km southwest of Caesarea Mauretaniae. It was a "castrum" (fort) created by the Romans around 60 BC, that later under Augustus grew with a "vicus" (village), populated by legionaries and their families.[1] The colonia, located near the river Chlef at 150 metres above sea level, protected the coastal city of Cartennas.[2]

Christianity was introduced by the beginning of the 3rd century, when the city had nearly 5,000 inhabitants. Under Emperor Septimius Severus there were minor persecutions.

An inscription indicates that Bishop Marinus was probably the founder of the Christian basilica that was built in 324 AD. This is the oldest church to be found in Africa.

In 411 AD, a Donatist bishop of the city, named Severinus, was at the "Conference of Carthage", which brought together Catholic and Donatist bishops. At that moment, the city had no Catholic bishop. Isidore of Seville mentions a bishop of Castellum called Cerealis who was active in 431. A Voconius or Boconius who lived in about 460 AD is mentioned by Gennadius of Massilia as the author of polemical writings against Jews and Arians. Reparatus is known through his tomb inscription that shows he was bishop from 465 to his death in 475 AD. Petrus was one of the Catholic bishops whom the Vandal king Huneric summoned to Carthage in 484 AD and then exiled[3]

No longer a residential bishopric, Castellum Tingitii is today listed by the Catholic Church as a Titular see.[4]

Under Emperor Constantine the Great in the 4th century, a Christian basilica [5] was built in 324 AD, just before the First Council of Nicaea. A century and a half later, in 475 AD, a counter-apse to the west was added to honour the tomb of Bishop Reparatus, whom an inscription states died in that year. 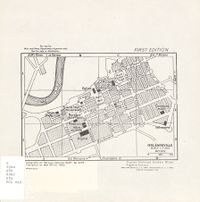 The Christian Basilica of Reparatus was located in the heart of colonial French Orleansville, the "place Paul Robert" near the Cheliff river, as can be seen in this old map

The pavement contained a labyrinth design near the northwest entrance,[7] probably the earliest extant example of Christian use of this motif.

The labyrinth itself is much simpler than others found in Roman buildings in North Africa and elsewhere, such as the labyrinth at Susa, Tunis illustrated as figure 37 in W.H. Matthews's Mazes and Labyrinths. That in the Castellum Tingitanum church might be thought to be another pre-Christian one but for the inclusion in the centre of a set of letters that can be read from the centre in any direction except diagonally as "Sancta Ecclesia", making it possible to read this phrase in it more than 3,000 times.[8]

One writer interprets the combination of the diagram labyrinth with that of the letters in terms of polemics against the Donatist heresy; another as representing "the difficult progress (symbolized by the labyrinth), with all worldly 'ambages' awaiting to trap the wanderer, a progress leading towards the holy refuge of the Ecclesia and, eventually, towards the salvation of the soul".[9]

The basilica of St Reparatus, discovered in 1843, was allowed to be used as a public stable and has been completely destroyed. There was in it a beautiful mosaic of which, fortunately, drawings exist. From this it appears that the church was built in A.D. 324, and that St Reparatus, bishop of the diocese, was buried in it in 475. Orleansville occupies the site of the Roman Castellum Tingitanum. Dictionary of Arts in Encyclopedia Britannica [10]

Vandals conquered the city and partially destroyed it. Under Justinian I there was a limited recovery of the city, with improvement of the surviving Christian churches. Around 690 AD, Arabs reduced it to ruins, when they conquered all the actual Maghreb.

In the Middle Ages, the site was an area containing many statues and was known as Al-Asnam (Arabic for "old sculptures-ruins"): it was totally deserted. In 1843, French Maréchal Bugeaud founded among the ruins the new city of "Orléansville",[11] which was renamed "Al-Asnam" in 1962 and Chlef in 1980.

Some remains (statues, coins, etc..) of ancient Castellum Tingitanum can be seen in the modern Museum of Chlef[12]