Castleford Tigers RLFC are an English rugby league club based in Castleford, West Yorkshire that plays in the rugby league top-tier Super League. Formed in 1926, the club were founder members of the 1996 Super League taking part in the inaugural competition and have won a number of major honours including the Challenge Cup four times. The club's most recent major trophy was the now-defunct 1994 Regal Trophy.

Castleford have a rivalry with neighbours Featherstone Rovers, Wakefield Wildcats and Leeds Rhinos. The club have been based at Wheldon Road in Castleford, since 1927, after moving from Sandy Desert in Lock Lane, Castleford.

Castleford RFC joined the Northern Rugby Football Union for the 1896–97 season, its second and remained in the ranks of the semi-professionals until the end of the 1905–06 season. Not much is known about the original Castleford club, except that they have no connection with the present Castleford Tigers RLFC.

Castleford joined the league for the 1926–27 season.[1] Many official records state that they were founded at this time but they had played successfully in the lower Yorkshire Cup for several years before this date. They actually joined the League "code" around 1920 and played in these early years at the Sandy Desert ground, which is now used by amateur club Castleford Lock Lane youth and junior teams. The club went professional in 1926 and moved to their current home ground on Wheldon Road in 1926.

The club soon started to make a mark on northern rugby, winning their first major trophy when they topped the Yorkshire League in 1932, followed by victory in the Challenge Cup in 1935. In 1938, they made it to the Championship finals, but failed to take the cup. The Second World War meant the league was suspended soon after, and Castleford officially abstained from league competition until the 1944-45 season.

Castleford finished fourth in the national league in the 1962/63 season. The following season they lost 7-5 to Widnes in the Challenge Cup semi-final replay at Belle Vue, Wakefield in front of a 28,700 crowd after drawing at Station Road, Swinton in the first meeting of the two clubs.

Castleford picked up where they left off when they were again beaten in the Championship finals in 1969, this time conceding defeat to arch-rivals Leeds. However, this loss seemed to spur the team on, and 1969 (v. Salford) and 1970 (Wigan Warriors|v. Wigan) saw Castleford win the Challenge Cup for two consecutive years, with clubs legends Alan Hardisty and Keith Hepworth leading the team.

John Sheridan was appointed head coach in 1973 for a spell. Castleford’s finished a respectable ninth in a one-division table but Sheridan stepped down following criticism from fans. During the late 1970s Castleford edged up the league, and in 1984 they made it to the Premiership final, where they were beaten by Hull Kingston Rovers. However, they finished consistently high over the next few years, and finished in the top four clubs in the Championship for four years during 1990-1995.

Darryl van der Velde took Castleford to the Challenge Cup final Wembley where they were defeated by Wigan in 1992. A year later, Darryl van der Velde left to become chief executive of the South Queensland Crushers, he was succeeded by his assistant John Joyner.

Through the Darryl van der Velde and early Joyner years Castleford were lauded for there style and were labelled 'Classy Cas'. This enjoyable playing style was to come to fruition most spectacularly in 1994, when Castleford were dominating the league. As well as defeating legendary Wigan team to take the Regal Trophy 33-2, they were also semi-finalists in the Challenge Cup and were also narrowly defeated in the Premiership final. That season John Joyner, was named Coach-of-the-Year by the RFL. St John Ellis scored a record 40 league tries over the 1993–94 season.

When a European Super League was suggested, Castleford resisted a merger with Wakefield Trinity and Featherstone Rovers, and becaming a founder member of the Super League in 1996. The team performed weakly at the start of the season causing the resignation of coach John Joyner, the team avoided relegation by a whisker in 1997 following the appointment of Stuart Raper.

The next season, they managed to frustrate the bleak predictions of pundits to move up the league, finishing sixth at the end of the season, after putting in some good performances and pleasing their fans with a sprinkling of victories.

In 1999, they continued on this upward trajectory, finishing fifth, as well as making the semi-finals of both the Challenge Cup and the Grand Final play-offs. This became one of the most famous seasons in the clubs recent past, with fans still remembering it with reverence. The team included many home grown players such as current assistant Danny Orr, and included that years Man of Steel winner Adrian Vowles. In 2000, the rise seemed to stall, as they repeated their fifth-place ranking and made the play-offs for a consecutive season. Raper left Castleford midway through the 2001 campaign to take charge of Wigan, his assistant Graham Steadman took over the reins as head coach.

The Tigers made the semi-final of the Challenge Cup in 2002, however the team was to fall down the table over the years to come. Gary Mercer guided the Tigers to five wins in their last 10 games after replacing Graham Steadman in 2004 but it was too little to save them from the drop as Castleford were relegated for the first time in the club's history. From the introduction of two divisions in the 1972-1973 Northern Rugby Football League season Castleford had spent 32 years in the top flight of British rugby league. Gary Mercer left the club following their relegation from Super League.

Dave Woods was appointed head coach and the Tigers finished second in the Co-Operative Championship in 2005 and were back in the Super League via play-offs following victory in the playoff final, as well as competing in the Northern Rail Cup final, where they lost to Hull Kingston Rovers.

Terry Matterson joined the Tigers in November 2005 in replacement of Woods. Castleford were celebrated for playing a good brand of Rugby League however it was not good enough to stop them from contesting a relegation dog fight which was to culminate in a historic match at Wakefield’s Belle Vue, dubbed ‘The Battle of Belle Vue’. It was a fight to stay in the league, and when Castleford lost to Wakefield Trinity Wildcats, it confirmed their relegation. Many Castleford fans do not accept this relegation and it become a grave point of contention with the governing body. The Tigers were relegated from second bottom in front of the newly inducted French side, Catalans Dragons, whom had been given immunity from relegation that season, and behind Wigan whom had been found guilty of a breach of the salary cap rules.

In 2007 Castleford again made a quick return to Super League as they finished top of the Championship with only one loss all season and defeated Widnes 42 - 10 in the Co-Operative Championship play-off final. The Tigers finished bottom of Super League in 2008, but were not relegated due to the newly in place franchise rules.

In 2009 Castleford saw a brief return to success by reaching the Grand Final play-offs for the first time since Super League VII and made the semi-final of the Challenge Cup in 2011 before being knocked out by Leeds in an 8-10 defeat after extra time. Club captain Danny Nutley was that year named Man of Steel.

Terry Matterson stepped down at the end of the 2010/11 season to take up a coaching role in Australia and was replaced by former St Helens coach Ian Millward. Millward released by mutual consent on 9 April 2013 after a poor run of results with 1 win in 18 games and with the team at the bottom of the Super League table. Daryl Powell was appointed coach in May 2013 taking over from assistant coach Danny Orr, who had been in temporary charge of the club.

Under Daryl Powell and Danny Orr the club has again started to see success on and off the field. The 2014 side were again lauded as Classy Cas for their fast paced and exciting style, with home grown players such as club captain Michael Shenton, Daryl Clark and Andy Lynch whom was returning. The side reached the Challenge Cup final in August 2014, losing to local rivals Leeds 23-10, watched by a crowd of 77,914 at Wembley Stadium. The side would eventually finish 4th in Super League and qualify for the play-offs. They were beaten 41 - 0 by St. Helens in their first game and therefore granted a second chance at progressing with a home tie against Warrington. They were beaten 14 - 30 and therefore knocked out of the play-offs.

On the 29th of September 2015, the club announced the death of Chairman Jack Fulton.

Wheldon Road was built in 1926 originally to be the home of Castleford Town F.C.. Castleford Tigers moved in for 1927 after playing their first season of rugby league across the river where Castleford Lock Lane now play their home games. Its record attendance was in 1935 when 25,449 fans watched Cas play Hunslet in the Challenge Cup third round. In 2015 it was announced that they would be leaving Wheldon Road and moving to a new stadium in Glasshoughton.

The Lateral Property group submitted a planning application for a proposed £135m development and Five Towns Stadium in Glasshoughton. In 2015 planning permission was given to build a new retail park and stadium called Five Towns retail park. Work is expected to start early in 2016 for Castleford to move into the stadium by the start of the 2018 season. 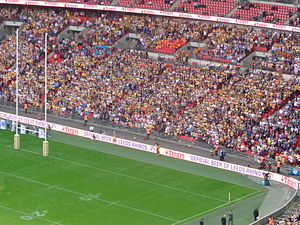 Castleford supporters at Wembley during the 2014 Challenge Cup Final.

Castleford Tigers have a large fanbase based on the size of the town by population/attendance records with 18.69% of the town population attending home games, the club have averaged a gate close to 8,000 per home game throughout the Super League era. The majority of Castleford's matchday support comes from primarily Castleford and the nearby towns of Normanton, Kippax, Knottingley, Pontefract, Rothwell, Garforth, York, Selby, Sherburn-in-Elmet and Cross Gates.